My Father's House is a tale of revenge and murder based on the Oresteia by Aeschylus, and the Iphigenia cycle by Euripides. Told through pure movement My Father’s House is imagined as a collective dream, telling the story of the curse of the house of Atreus. Students from the UNM Department of Theatre and Dance travelled to Ulaanbaatar, Mongolia in May to present My Father’s House at the Mongolian State University of Arts and Culture as part of the 8th International ATEC festival (The Asian Theatre Education Centre).

The festival also included productions from Mongolia, China, Japan, Korea, India, Thailand, Vietnam, and Singapore. The theme of the festival was “re-envisioning the classics.” Therefore, the department chose to go back to the roots of Western drama. My Father’s House is based on the five plays comprising the Oresteia (458 BCE) by Aeschylus, and the Iphigenia cycle (c. 414-405 BCE) by Euripides. Together, they tell the story of “the curse of the house of Atreus,” including the famous characters of Orestes, Elektra, and Agamemnon.

Using both spoken text and movement, The Forest, The Desert is a journey of personal narrative from Dante’s Inferno to Chief Joseph’s surrender, created and performed by a diverse cast of UNM’s finest performers. 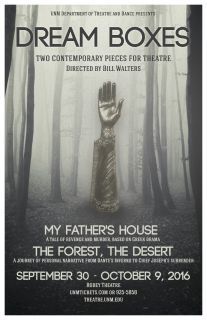 Walters is an associate professor of acting, directing and movement as well as Head of Performance at UNM. A native of Chicago, he earned his Bachelor of Arts degree at Oberlin College and his Master of Fine Arts degree at Southern Methodist University, Meadows School of the Arts. Walters has taught full time at Yale University, the Professional Theatre Training Program at the University of Wisconsin, Tulane University, and Hunter College in New York City.

He has worked professionally in theater and film throughout the United States and overseas, particularly in China. He holds black belts in Tai Chi, Chi Gong and Kung Fu (Northern and Southern styles) and is certified by both the American and British Societies of Fight Directors. Walters' interests lie in interdiciplinary performance for the stage and screen.

Ticket prices are $15 general admission, $12 UNM Faculty & Seniors, and $10 UNM Staff & all Students. Tickets are available at the UNM Ticket Offices located at the UNM Bookstore, Central and Cornell, or WisePies Arena aka The Pit, University and Avenida Caesar Chavez, and by calling (505) 925-5858. Tickets may also be purchased online.