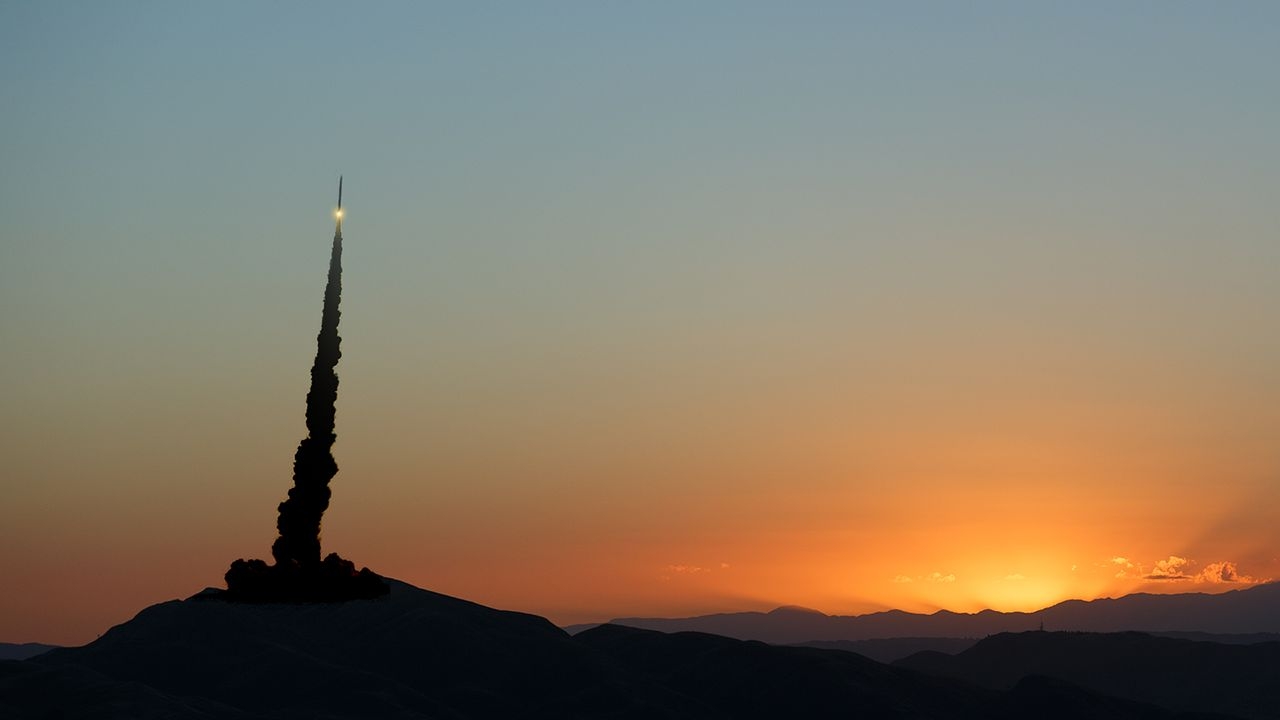 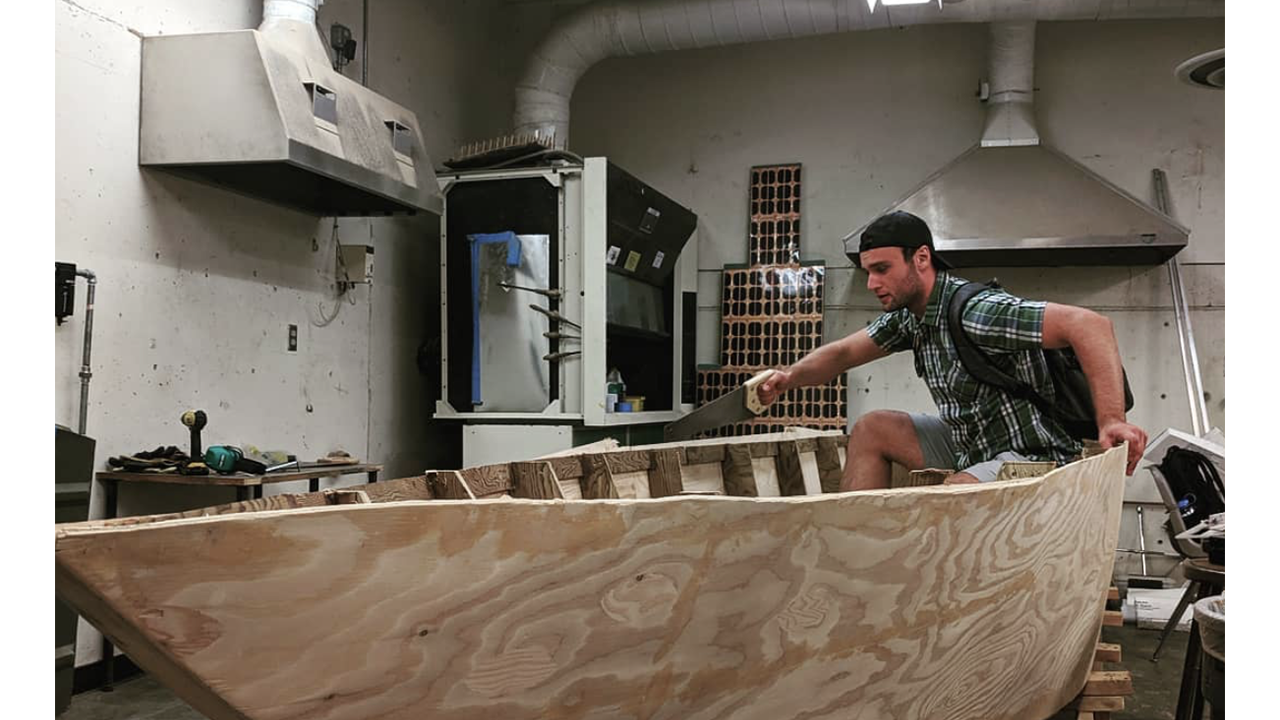 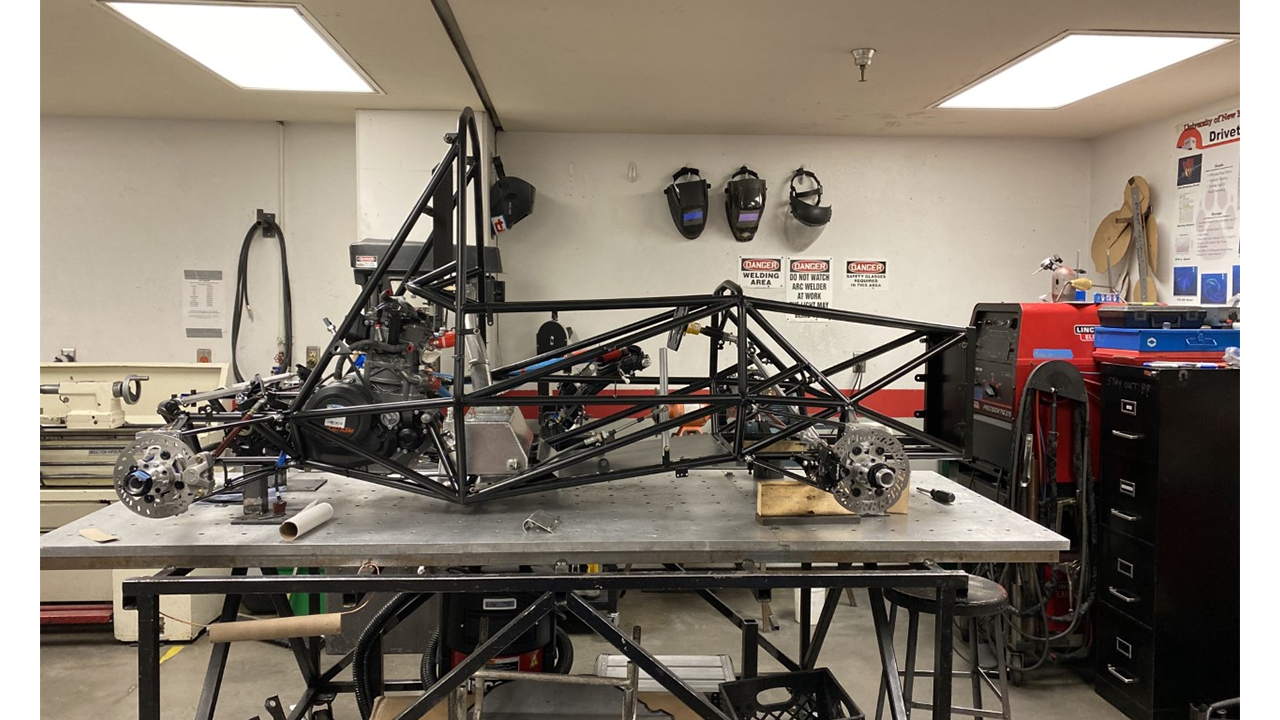 Typically this time of year, large groups of students can be found putting in long hours in various lab spaces around The University of New Mexico engineering buildings. In a normal academic year, students are finishing up senior design projects, and three of the most high-profile — Lobo Launch, Formula SAE and Solar Splash — culminate in international competitions, so the stakes are particularly high.

All three competitions were set for June 2020 and require a high level of coordination, not just to make sure all engineering systems are go on a car, boat or rocket, but to make sure travel plans are in place to take a large project and a large team to competition across the miles.

The Formula SAE competition has traditionally taken place in Lincoln, Neb., but this year was to be in Fontana, Calif.; the Solar Splash has been in Springfield, Ohio; and the Spaceport America Cup (where the Lobo Launch rocket competed for the first time last year) near Las Cruces, N.M.

But as we all know, 2020 has not been a normal year. As soon as the COVID-19 outbreak became widespread, each of these competitions that draw thousands of people from around the globe were canceled, and social distancing protocol required that students stay out of the labs and rely on online learning to finish the semester, which puts hands-on projects like these in peril.

The students still get a grade from the course, which had to be converted to an online format, but the outcome is much different than what anyone could have predicted at the beginning of the semester.

With the cancellations coming right around spring break, each of the projects were far along, with teams making crucial design and build decisions and adjustments and were nearly at the stage for testing them out.

The Formula SAE team, under the direction of Professor John Russell in the Department of Mechanical Engineering, was ready to drive the car for a test run March 15, which would have been the earliest date ever.

“This was a tremendous setback as this was one best-prepared teams we have had considering both the car design and drivers,” Russell said.

He said because the FSAE program has overlapping teams — with next year’s team working with the current team — both the 2020 and 2021 teams were affected due to lab closures and the fact that the software they use is only on the machines in the UNM computer labs, which are also closed. The 2021 car design would typically be finishing up by the end of the spring. However, the team did manage to transfer current design data to external hard drives so it can be accessed for the design report required by FSAE, which Russell said the team will still submit. In addition, the team will participate in a virtual competition in early June which includes all the paper events: cost and manufacturing, design, and business presentation. The feedback will be provided virtually and will help prepare the team for the 2021 competition, Russell said.

Sam Casaus, project manager for the 2020 team, said the cancellation was disappointing on a lot of fronts, but especially because they overhauled practically the entire car, including the aerodynamics package and a new data acquisition system. They were hoping for a Top 10 placement in the finals.

“We are absolutely heartbroken,” Casaus said. “This is something we have been working toward since January 2019, and we have pulled many long days and late nights, and not because we had to. FSAE has been something that precedes January 2019 for many of us, as this is something many including myself have come to UNM for. Obviously, not being able to fulfill a dream that you have had for years is hard.”

However, Casaus said that he and the team are grateful for the support they received this year.

“There have been so many people that have taken time to interact with us, give us encouragement, and sponsored us that we wanted to compete for, as they were the reason we were originally able to go to competition,” he said.

In terms of this year’s car, the 2020 internal combustion car will compete in the 2021 contest, but the future is more uncertain for the 2020 electric (EV) car, which the team was hoping to register and take to competition for the first time this year.

Russell said priorities for the coming year will be to finish the 2020 internal combustion (IC) car, complete the EV prototype, design and build as much of a competition 2021 EV car as possible, and start a 2021-22 IC car. Since 2020 teams are automatically registered for 2021, there is no issue in registering the 2020 IC car, he said. And since the 2020 EV competition was fully registered, the only way they could compete a 2021 EV car is if other teams dropped out.

Eric Benfield, the leader of the 2021 team, said that even though the pandemic has significantly changed the team’s plans, thanks to a good foundation laid by the 2020 team, they are coming out of this with a renewed enthusiasm for June 2021, as well as lessons that will last far beyond that.

“This year I have learned a ton about the beginnings of an engineering project, project management, and what it takes to undertake a project this size,” Benfield said. “We are still in the early stages of designing the 2021 car, so I am sure there will be many more lessons to be learned as we continue.”

The Solar Splash solar-powered boat team has competed successfully the last few years in the international competition in Ohio, finishing fourth place overall, third place in the solar slalom event and also won the Teamwork Award for best coordinated group effort in 2019. This year, the team had high hopes to place even higher, having made some drastic changes.

Trey Alexanderson was a solar array subteam member of this year’s team and said the team had made a variety of improvements to the boat for 2020, including building a new wooden hull that was designed, built and about to be tested by the team. It is made out of quarter-inch plywood and coated in fiberglass and is an ultra low-drag wavesplitter design, with its shape determined by a student team that conducted both numerical modeling and small-scale validation experiments.

“We were hopeful that this new boat hull was going to be lighter and was going to reduce drag compared to the last hull that we used,” he said.

The team also was looking into ordering a more powerful motor to improve sprint times, and team recently acquired new solar cells from SolAero Technologies to build a new solar array for the boat, one that would be lighter than last year’s array, putting out 528 watts of power on a sunny day.

Peter Vorobieff, professor of mechanical engineering and head of UNM’s Solar Splash, said that some of the members of the current team will continue as graduate students and are planning to compete in the 2021 contest.

Alexanderson, who is earning his master’s degree in May, probably won’t be one of them. He said he feels fortunate that he was able to compete on last year’s team as an undergraduate, but feels bad for current undergraduates who might not get the opportunity next year.

Despite the unexpected outcome, he said he still is walking away wiser.

“I gained more knowledge in the design and use of different electrical motors and solar cells, as well as the many steps it takes to successfully design a boat,” he said.

The Lobo Launch rocket had great success in 2019, competing for the first time in the Spaceport America Cup, placing No. 5 overall and No. 3 in its height class out of 120 teams from 14 countries. In January, the team was honored at the New Mexico statehouse in Santa Fe by Gov. Michelle Lujan-Grisham for being the first team to win the 2019 Chile Cup, a new competition within the Spaceport America Cup contest between New Mexico teams. UNM placed above New Mexico State, the other state team to compete.

Fernando “Doc” Aguilar, the director of the Lobo Launch program, said he hopes that the students can test launch the rocket they were working on sometime yet this year.

Deanna Jaramillo, who was in charge of public relations and mentoring for this year’s Lobo Launch, said because the labs closed, the team couldn’t test any of the components, pre-assemble the rocket, or test the diagnostics. The semester was finished up with lectures via Zoom.

She said that while it was extremely disappointing to the team to have the competition canceled, all was not lost.

“The main thing that the entire class needs to remember was that the competition was an extra bonus to the class,” she said. “We decided at the beginning of the fall semester last year that we wanted to go to competition but that wasn’t our first priority. Our first priority was to design, build, and test a rocket. We used the competition rules and requirements as a guide for the rocket design.”

Although the team was not able to finish the complete build or test the rocket prior to the end of the semester, they are hoping that there will be some team members around in the summer to finish up and do a flight test once restrictions are lifted.

And like the members of the other teams, Jaramillo felt like she gained a lot from the experience of being part of Lobo Launch, even though it came to an unexpected end.

“I learned that we have some amazing men and women who continued to focus on the completion of the project to the best of their abilities,” she said. “I am proud to be part of such a great group of people whom I do and will miss dearly.

She gives kudos to Doc Aguilar for leading the group the last few years and feels confident that thanks to his vision and leadership, the program will continue to grow in the future.

The student design teams rely heavily on donations. Those wishing to support these hands-on learning opportunities for our students can do so by giving to funds set up for each program.