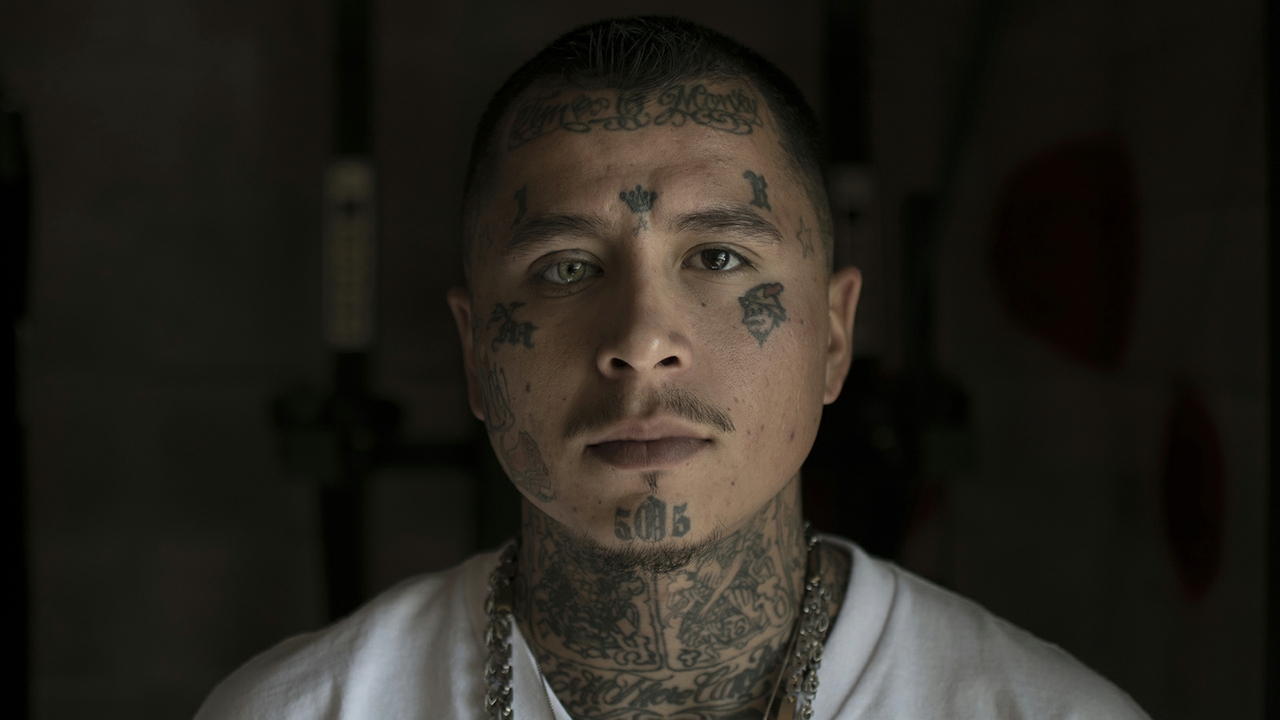 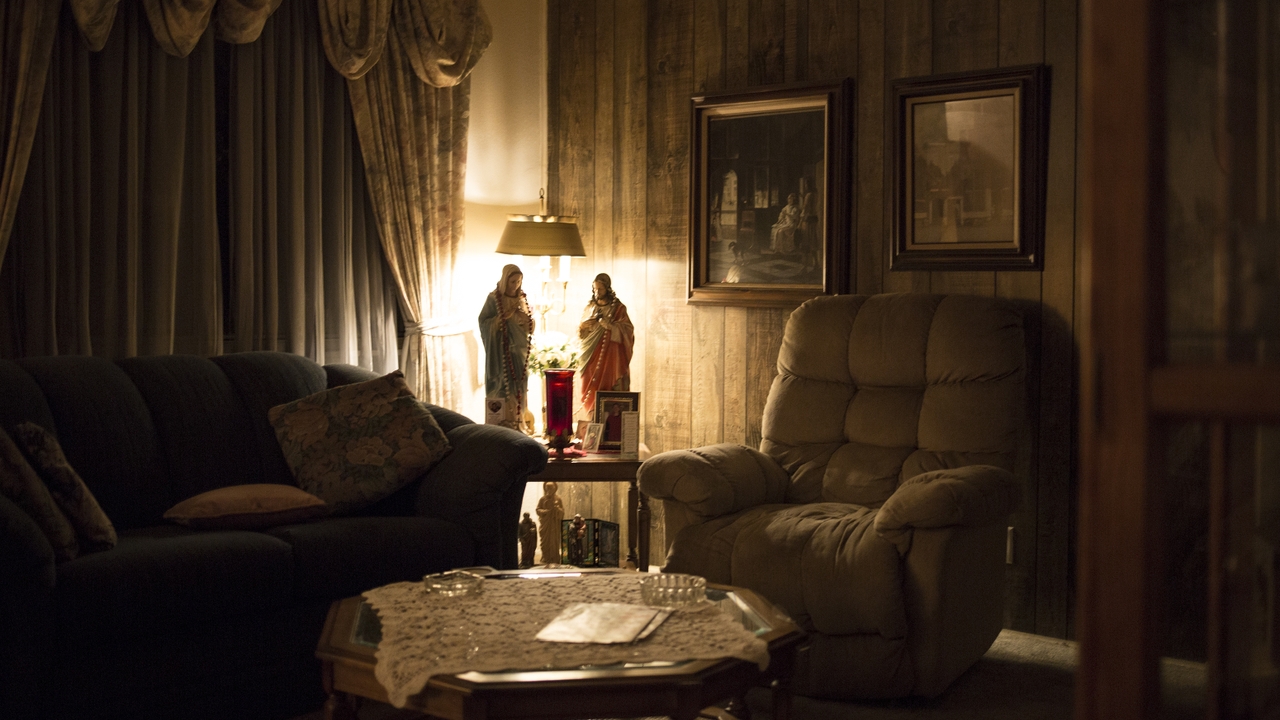 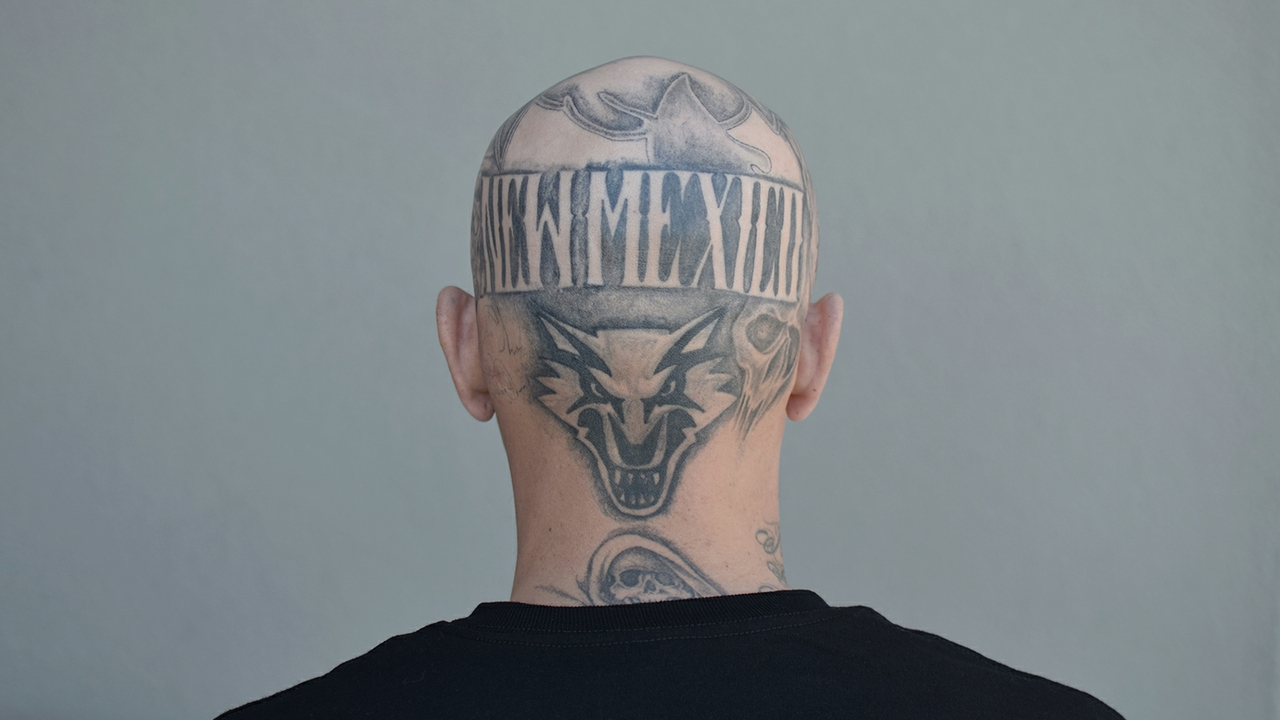 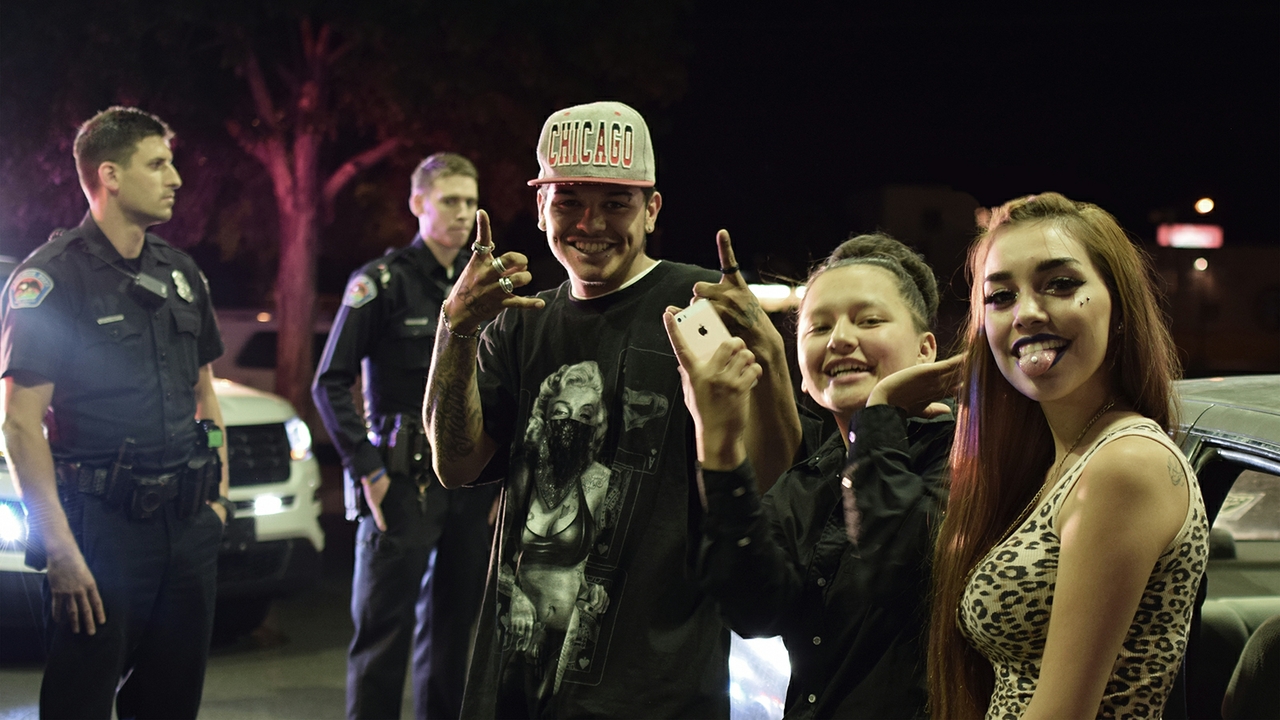 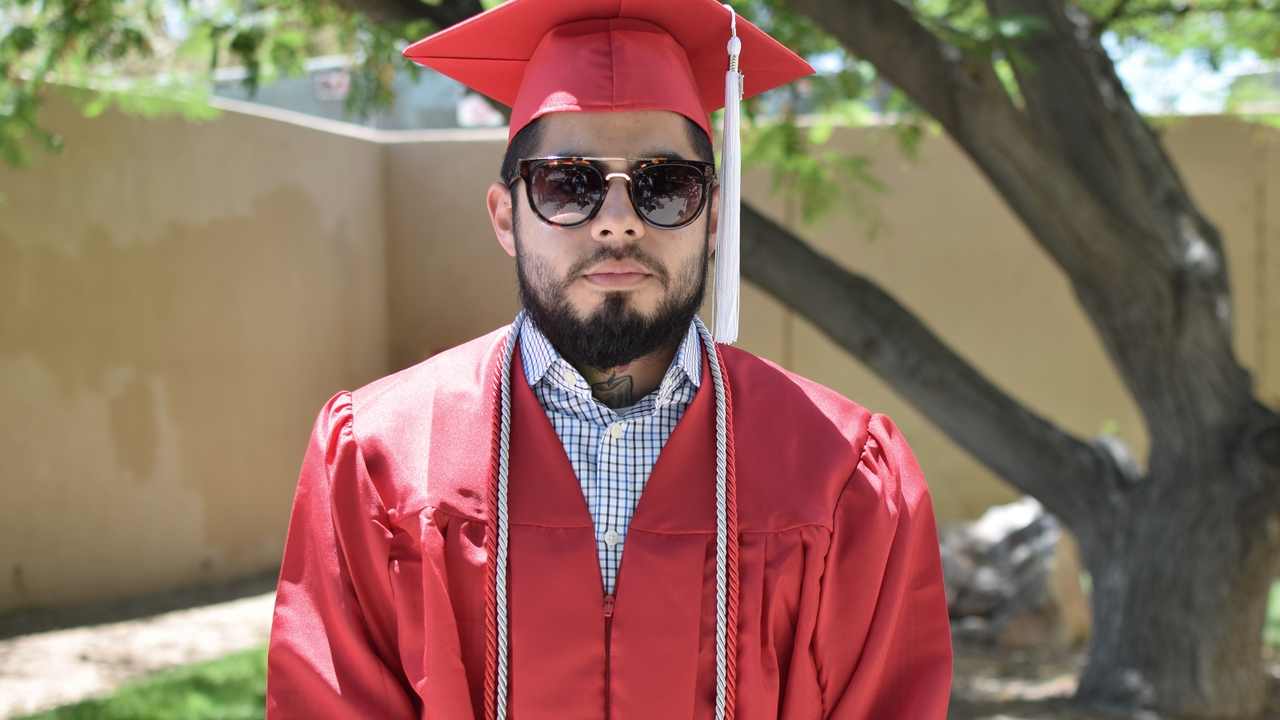 After battling an opioid addiction, Frank Blazquez is determined to help others come out alive
By Elizabeth Dwyer December 12, 2018
Categories: Inside UNM History

The ancient Chinese principle of Yin and Yang states that “all things exist as inseparable and contradictory opposites,” such as, there can be no darkness without light and vice versa.

This principle certainly holds true for modern life and urban centers, where many thousands of people come together bringing all of our humanity with us, for better or worse. Frank Blazquez, a graduate of The University of New Mexico, has set out to capture this complexity of human experience on screen with Duke City Diaries, a work-in-progress, mini-documentary series forged through Blazquez’s partnership with cinematographer John Acosta.

“There’s a lot of great stuff about this state that I love, and I’m not trying to make New Mexico look horrible,” Blazquez says. “But I also don’t want to ignore stuff that’s just sticking out like a sore thumb; stuff that has affected me and people I care about. I almost lost my life from it, so I’m not going to pretend like it doesn’t exist.”

Born and raised in Chicago, Blazquez moved to Albuquerque 10 years ago, when he was 21. Originally, he planned to help his parents move and head back to the Midwest, but he fell in love with New Mexico.

"I even witnessed doctors giving out prescriptions to people who they knew were just going to sell them on the street. Unfortunately, me and my friends exploited that.”

A certified optician at the time, Blazquez started working in an optical office. He was chipping away at some college credits by taking classes at UNM, but when he met up with the wrong crowd, it worsened issues that Blazquez already had with drug addiction.

“I realized how bad the situation was here in New Mexico with painkillers,” Blazquez says. “I was introduced to it really easily, and the people I met got them so easily. I even witnessed doctors giving out prescriptions to people who they knew were just going to sell them on the street. Unfortunately, me and my friends exploited that.”

Battling his addiction on and off, Blazquez would get clean for a few months at a time here and there, but then he would fall off the wagon and binge hard.

“Most of the time we would go to the ‘war zone’ area. That’s where we would party and hang out,” Blazquez says. “I identify as Mexican, and people in the Mexican community in Chicago have their own look and symbols and signifiers to represent their community. The people I met (in Albuquerque) had this look that’s really different. They had a lot of face tattoos, prison tattoos, stuff like that, and it kind of scared me at first… But once I started to get to know them, I realized they weren’t too different from me.”

Blazquez realized that the most common thread between himself and others struggling with an opioid use disorder was that no one was languishing lazily or even comfortably in their situation.

“They were all trying to get a new job, they’re trying to get back in school… We weren’t all happy sitting around doing painkillers and stuff,” Blazquez says. “We would do it, and then talk about ‘oh my God, I can’t believe that I’m doing this… I really wanna get off of this…’”

It was in the midst of one of these conversations that Blazquez set a goal for himself, should he ever get clean. He wanted to find a way to give back to the community by telling these stories.

In the fall of 2016, Blazquez left his last optical job. As he tells it, he was forced to resign after frequently showing up late for work, often under the influence of opiates. That’s when Blazquez started taking Suboxone, a drug designed to help treat adults with an opioid dependence. It was instrumental in helping Blazquez quit taking painkillers, as were his very supportive and encouraging parents.

“Having two parents there, who I can talk to at any time and know what I’m going through… I credit that with helping me way more than the Suboxone,” Blazquez says.

When he found himself able to start envisioning a future where he was no longer dependent on opioids, Blazquez transferred his college credits to UNM, bought a camera, and started to take school really seriously. Majoring in History, Blazquez approached his studies with an eye toward documentary storytelling.

“You have to be with people, spend time with them and dig deeper to really understand.”

Fascinated by the stories you usually don’t read about in the newspaper, Blazquez believes in collecting narratives through both an immersive experience and a hands-off approach.

“You have to be with people, spend time with them and dig deeper to really understand,” Blazquez says. “Most of my process is to just shut up and take pictures and listen. I try not to interfere. It’s something I learned from studying history, how to just present your findings.”

Blazquez was able to phase out the use of Suboxone before starting classes at UNM, which is where he says things really turned a corner for him. 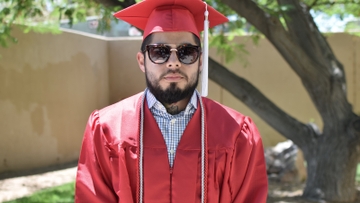 “UNM is what really got me clean. It’s a great community here. All college campuses have people who party and stuff, but to be honest, I didn’t really meet anyone in my classes that talked about drugs and stuff like that,” Blazquez says. “It was all about our studies, and what you want to do – productions, creative things – so my classmates and my professors, like Dr. Bieber and Dr. Bokovoy, were awesome. And I was granted the Humans of New Mexico Fellowship through UNM, so being here really helped me stay focused and sober.”

Blazquez also attended a number of NA meetings, connecting with a community of people who were experiencing similar struggles, and forging relationships with some of the individuals he would eventually feature in Duke City Diaries.

“All those things helped me get back on my feet,” Blazquez says. “There comes a time when you have to take the training wheels off and get back to living your life again.”

Blazquez encountered a speedbump in 2017 when he was robbed at gunpoint. Luckily, he didn’t have his camera on him, though he lost a lot of belongings – including school documents, books and supplies. With help from an emergency fund offered by UNM, Blazquez was able to counter some of the loss. His professors were incredibly understanding and supportive, giving Blazquez extensions to re-do and complete his work.

While the experience of having three guns pointed at his head gave him pause, Blazquez ultimately decided that giving up on his project wasn’t an option.

“It kind of pushed me forward to keep doing this. I wasn’t going to let that incident stop me; instead, I really started to kick things into high gear. I think about examining and uncovering the reasons I was robbed,” Blazquez says. “Some of the people I speak with have no choice but to do things like that. They don’t have a family. They don’t have a mom or a dad like I do. They don’t have the resources or people to tell them that taking actions like that won’t actually help them with their lives. They’re really in a place of despair.”

Inspired by photographs born out of the Works Progress Administration (WPA) project of the 1930s and 40s, along with the work of UNM professor Miguel Gandert, Blazquez hopes his own photography and Duke City Diaries will act in service of the greater good. He also aims for these projects to illustrate the intricacies of life in Albuquerque.

“It’s a way to pay my respects back to the community. I try to focus on certain images – like the intricate tattoos that have so many deep roots and significant meanings,” Blazquez says. “For a lot of people in the war zone and in the south valley areas, their family roots really run deep, to where it’s almost political. There are people who can trace their roots back to the 1800s.”

A self-taught photographer, Blazquez says he’s still learning new things every day, and that he owes so much to his highly-skilled partner, John Acosta. The two met when they were each awarded Humans of New Mexico fellowships, and quickly formed a bond.

“I’m so lucky to be working with him. He knows so much more than I do, about the technical aspects (of filmmaking),” Blazquez says.

The short films made by Blazquez and Acosta aren’t just shining a light, they’re making a tangible difference. Carlos Sanchez, whose Duke City Diaries story has the most views in the series on YouTube, works as the executive assistant to the CEO at Heading Home, “a New Mexico non-profit that provides emergency and permanent supportive housing services to people experiencing homelessness.” When Sanchez conducts intake interviews, people will tell him he’s the reason they came in looking for help. Because they saw his story and knew he was someone who could relate to what they’re going through.

For now, Blazquez and Acosta’s goal for Duke City Diaries is just to not stop doing it. They try to put out an episode on YouTube every eight to 10 weeks.

In the long run, Blazquez and Acosta envision combining the shorts into a documentary feature. So far, they’ve relied on grassroots donations to keep the funding coming in and keep the project going. Even with the uncertainty of when and how they’ll finance one episode to the next, it’s the significance behind the stories that keeps Blazquez going.

“I think I have a responsibility to try my best to be really transparent and to not interfere too much,” Blazquez says. “As an outsider – I wasn’t born or raised here – I mostly just let people talk, and act as a vehicle for their stories. We want to make sure we hear it in their words. It’s really important to give people a voice.”

Exhibitions of Blazquez’s photography can currently be seen at 516 Arts and the Museum of Spanish Colonial Art in Santa Fe.

You can support Duke City Diaries by scrolling to the bottom of the page and donating here.