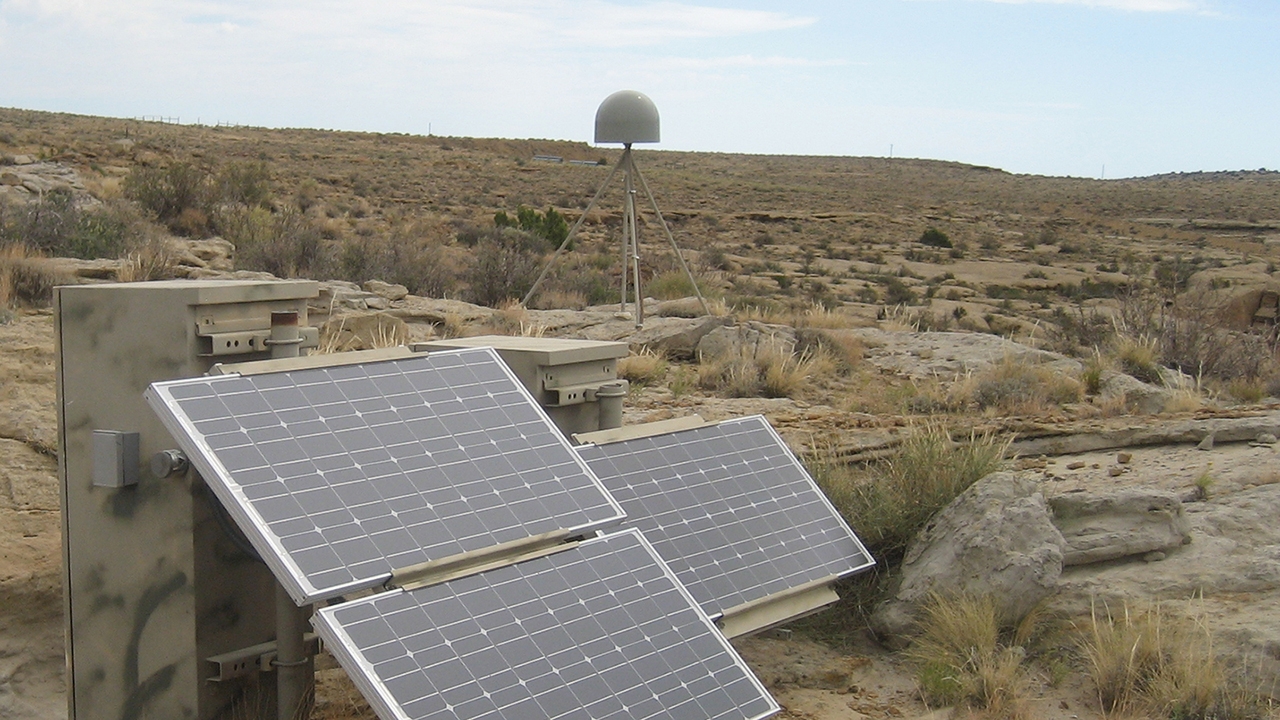 (GPS) provides scientists with earthquake activity at a site located in northern New Mexico, an area that is part of the Rio Grande Rift.
Credit: UNAVCO 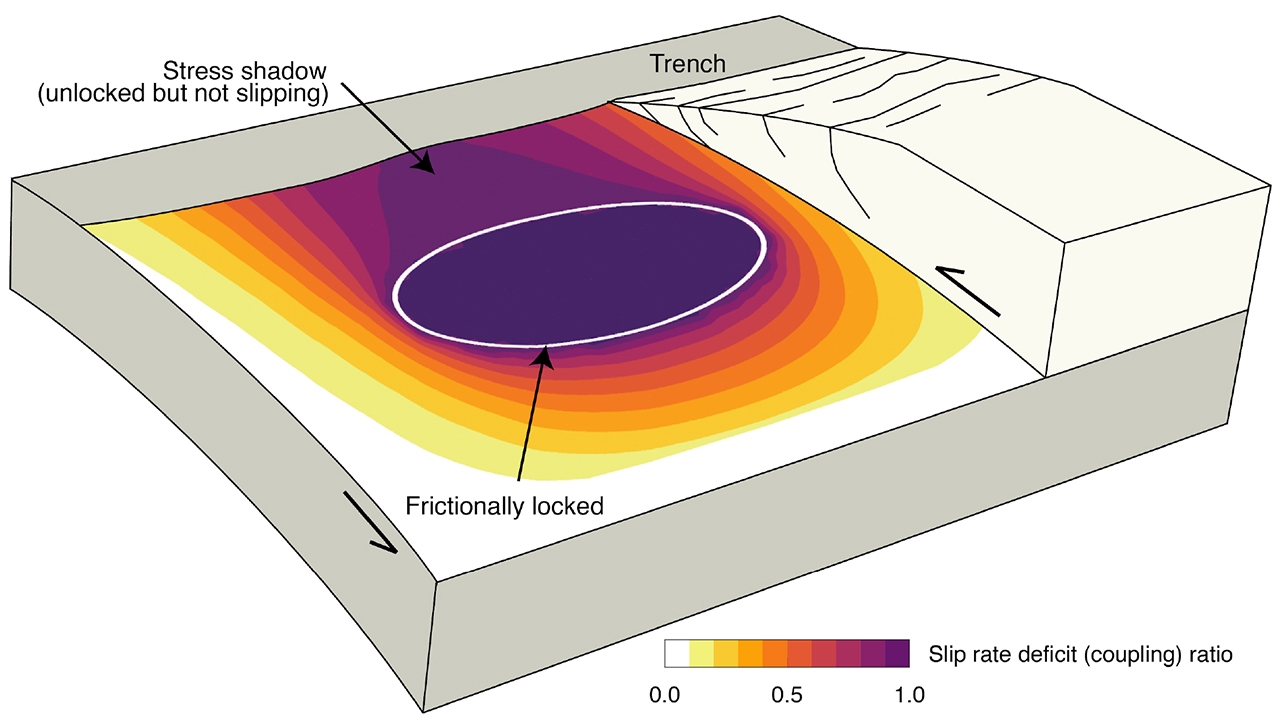 An illustration of the

stress shadow effect on a megathrust fault. The area inside the white ellipse is frictionally locked and does not slip interseismically. The remainder of the fault is frictionally unlocked and slips freely in response to applied shear stress. 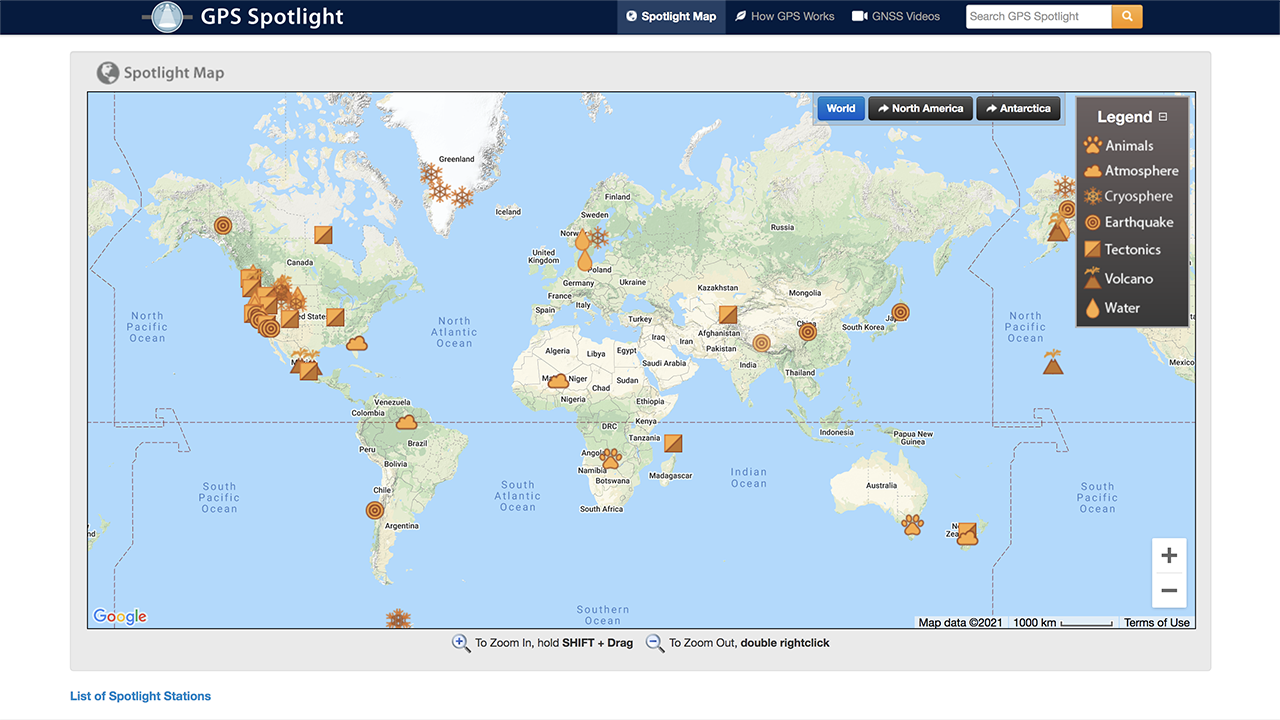 Two of the most destructive forces of nature – earthquakes and tsunamis – might be more of a threat than current estimates according to new research conducted by scientists at The University of New Mexico and the Nanyang Technological University titled Slip rate deficit and earthquake potential on shallow megathrusts. The research was published today in Nature Geoscience.

The researchers developed a new method to assess earthquake and tsunami hazards represented by the most distant part of offshore subduction zones and found that the hazard might have been systematically underestimated in some areas, meaning that tsunami risk assessments should be redone given the new results. The findings have important implications for the mitigation of risk in affected areas worldwide, including Southeast Asia and the Pacific Rim, in the event of future earthquakes and tsunamis.

Megathrust earthquakes are among the most powerful earthquakes experienced worldwide and occur in subduction zones, where two tectonic plates converge, and one slides under the other. The plates move toward each other continuously, but if the interface, or fault, between them is stuck, then a slip deficit builds up over time. Like a debt, this slip deficit has to be paid off eventually, and for tectonic plates, payday is earthquake day. When these earthquakes affect the shallowest part of the fault near the seafloor, they have the potential to shift the seafloor upward and create devastating tsunamis as well.

"If these areas can slip seismically, global tsunami hazard could be higher than currently recognized." – Eric Lindsey, assistant professor, UNM Department of Earth and Planetary Sciences

Understanding the potential rupture behavior of megathrusts, particularly in the shallow offshore part of the fault where most destructive tsunamis are generated, is, therefore, a critical task for geoscientists forecasting seismic and tsunami inundation hazards. The likelihood of seismic behavior is often assumed to be somewhat low in the shallow part of the fault, based on laboratory studies of recovered fault zone material.

The fault’s rate of slip deficit buildup can also be measured through the use of geodetic observations that track how the earth’s surface moves over time, for example by using highly precise GPS sensors installed on land, together with a model that relates how slip on the fault affects the movement of these stations. However, it is hard for scientists to use this technique to “see” what is going on in the shallowest part of the fault because it is far from land, below kilometers of water, where traditional GPS instruments cannot operate.

Now, scientists at The University of New Mexico and the Nanyang Technological University (NTU) in Singapore have developed a new geodetic method for inferring this value that accounts for the interaction between different parts of the fault, resulting in a much more physically accurate result. Lindsey’s team noted that previous models have failed to take into account the fact that if the deep part of the fault is stuck between earthquakes, the shallow part can’t move either – it is in what they term a ‘stress shadow' and there is no buildup of energy available to cause it to slip. By taking this effect into account, the team developed a technique that uses the same land-based data but results in a vast improvement in their ability to “see” the fault slip in the areas that are farthest from shore, allowing researchers to reassess the hazard presented by the offshore parts of subduction zones most prone to tsunami generation.

“We applied this technique to the Cascadia and Japan subduction zones and found that wherever deeper locked patches are present, the shallow fault must also have a high slip deficit - regardless of its own frictional properties,” said Eric Lindsey, an assistant professor in the UNM Department of Earth and Planetary Sciences who conducted the research while at the Earth Observatory of Singapore at NTU. “If these areas can slip seismically, global tsunami hazard could be higher than currently recognized. Our method identifies critical locations where seafloor observations could yield information about frictional properties of these faults to better understand their slip behavior.”

This study is important because it calls for a reassessment of previous models of tsunami hazard on megathrusts worldwide. Because this can be done with existing data, the reassessment can be done comparatively quickly as well. Hopefully, this will lead to better preparedness among coastal communities for future events.

Other institutions involved in the research include the School of Earth Sciences, Energy and Environment, Universidad Yachay Tech, (Ecuador) and the Department of Earth and Planetary Science at the University of California Berkeley. The study is supported by the National Research of Singapore, the Singapore Ministry of Education and the National Science Foundation among others.