Chaos is never a good thing, whether it involves a messy room or messy waveforms. It is the latter that is the chief focus of a University of New Mexico researcher. 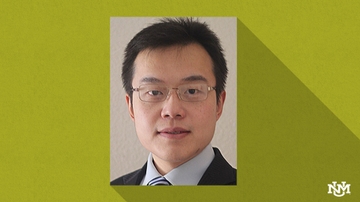 Zhen Peng, an assistant professor of electrical and computer engineering, is the recipient of a National Science Foundation CAREER Award for a project titled “Physics-Oriented Statistical Wave Analysis Integrating Order and Chaos.” The $500,000 award began Feb. 15 and ends Jan. 31, 2023.

Although the problem Peng is focusing on is very technical and theoretical, it is one of practical importance for our modern lives. As electromagnetic physics continues to contribute to nearly every aspect of modern living, from smartphones to computers to smart home systems and more, each one of these technologies creates bouncing waves in the atmosphere, which leads to increasingly congested and competitive environments for wireless communications. Peng says this makes the communication less reliable.

“Our goal is to fundamentally understand wave propagation in complex electromagnetic environments,” he said. “We would like to develop new computational algorithms and mathematical models to rigorously describe the phenomena and predict the waves’ behavior.”

Having reliable communications is especially important for the technology of the future, such as 5G, which will enable the expansion of the Internet of things, whereby computers, phones, appliances and other electronics are interconnected, allowing smart controls of homes, vehicles and many other devices. Smart home technology is one well-known application.

Peng said most smartphones now are running on 4G, which allows for broadband Internet, but 5G is exponentially faster and allows more data and more complex data communications interactions to take place. 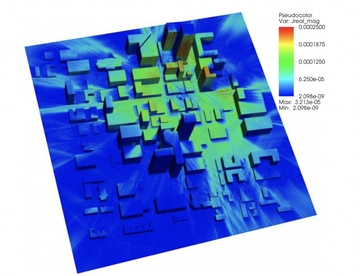 Some of the work will be done in downtown Albuquerque, with sensors being places on various buildings. An outreach component to the grant will involve working with New Mexico high schools to build activities geared toward encouraging especially students from diverse backgrounds to become interested in engineering. Partially, this will be done through developing virtual-reality models to simulate wave behavior, which is invisible, for greater understanding of this theoretical work. Peng said the virtual-reality component will be useful to not just youth but college students and the general public too.

The NSF CAREER program is geared toward helping early career faculty get strong starts on their academic careers. The award is NSF’s most prestigious award in support of junior faculty who exemplify the role of teacher-scholars through outstanding research, excellent education, and the integration of education and research within the community. Such activities should build a firm foundation for a lifetime of leadership in integrating education and research.