For months now, weather forecasters have been talking about a Godzilla El Niño. Even though most New Mexicans have enjoyed a fairly mild fall, make no mistake, an El Niño winter is here. The question now becomes, how much moisture will it generate over the course of the winter months?

By definition El Nino is a patch of anomalously warmer than normal water right along the equator in the Pacific that typically extends from the South America coast often eastward to the international dateline. The current El Niño is even more expansive than that. It’s warm all the way across to well west of the dateline. The warm phase of this kind of ocean anomaly is called El Niño.

El Niño is a cyclic phenomenon so it has a warm phase and a cold phase. When it’s anomalously cold along the equator, it’s called La Niña, which typically has very close to the opposite effects on the climate of North America. Typically, La Niña winters are typically dry in the southwest and anomalously wet in the Pacific Northwest. This causes a disruption of the ocean-atmosphere system in the tropical Pacific having important consequences for weather around the globe. This phenomenon is not totally predictable, but on average it occurs once every four years and usually lasts for about 18 months after it begins.

“When ocean temperatures along the equator in the Pacific Ocean are extremely warm, we call that climate anomaly an El Niño,” said University of New Mexico Department of Earth and Planetary Sciences Professor and Climatologist Dave Gutzler. “It’s been building up for more than year. In fact, it was expected to get really warm here a year ago but it fizzled out through last winter. But starting this past spring, the temperatures right along the equator warmed up dramatically so we had a full blown El Niño at a very unusual time of the year.”

The current full blown El Niño was noticeable back in June. However, ordinarily El Niño is at its strongest in the late-autumn and winter, so how much moisture can southern tier states receive is very much in question, but the latest projections from the National Oceanic and Atmospheric Administration (NOAA) call for a strong El Niño to continue through the Northern Hemisphere winter 2015-16, followed by weakening and a transition to El Niño Southern Oscillation (ENSO)-neutral during the late spring or early summer. The expectation is that this El Niño will rank among the three strongest episodes as measured by the three-month SST departures in the Niño 3.4 region dating back to 1950.

“When El Niño happens in the winter, warm water along the equator pulls the Pacific subtropical jet stream, which is blowing eastward from Japan and pulls it southward towards the warm water and equator, and when the jet stream is pulled southward, it pulls the winter storm track for frontal storms coming off the Pacific Ocean southward with it,” Gutzler explained. “That means that California, Arizona, New Mexico and points east get more than their normal share of winter storms, and the Pacific Northwest, which is normally very wet, gets fewer than normal storms.”

Last year, California was part of what people thought would happen last winter if the El Niño had developed, but California in particular remained dry. “When El Niño fired up later in the spring, that’s when it got wet here so we belatedly got extra moisture and more storms late in the spring than we normally get almost certainly attributable to El Niño,” Gutzler said.

“Historically, there’s a pretty weak connection between El Niño and the summer monsoon, but that’s because the El Niño itself is normally very weak during the summer. The effect of a weak El Niño on monsoon dynamics is not as clear cut as the effect of El Niño on the winter storm track.”

The presence of a warm water track that extended up along the Pacific Coast during the summer made it somewhat wetter than normal across the Southwest, which fit with the climate prediction center of NOAA, which called for above normal precipitation through the summer and into the autumn as long El Niño persisted, which it has. 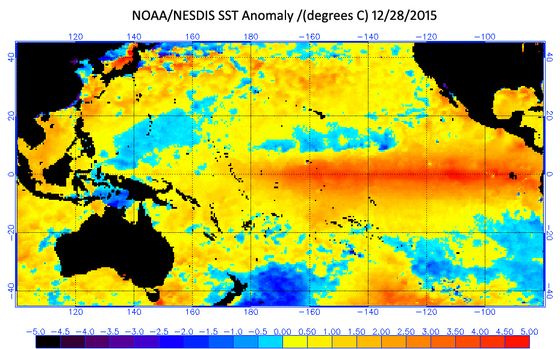 “Once again this El Niño is very unusual because of the timing of it maximizing in the spring and the summer,” Gutzler said. “Ordinarily El Niño builds up in the fall and is strong through the winter and dissipates in the spring. This year, almost the reverse of that has happened – it was weak through the winter and fired up late in the spring and that poses a challenge for us to make a skillful El Niño forecast because we don’t have very many historical precedents for an El Niño that’s evolved this way. Typically we think of the predictability of El Niño as being small from spring through summer and into the next fall.”

Since the turn of the century, and in particular over the last 4-5 years, southern tier states have had more of a tendency toward La Niña conditions and year after year of very dry conditions with very poor snowpack across the southwest and in the Southern Rockies. That’s led to year after year of poor snowmelt runoff, which has depleted reservoir storage across the southwest including Lake Mead and Lake Powell on the Colorado River and Elephant Butte on the Rio Grande.

However, the climate models that are used to predict El Niño, including the most recent forecast, mostly carry it through the fall and into winter. “The climate prediction center at NOAA has expressed optimism that El Niño really will last through the winter, which will be great news for New Mexico in terms of winter precipitation,” Gutzler said.