Terezín, a concentration camp in what is now the Czech Republic, was designed by the Nazis to eradicate Jewish cultural life. Among those imprisoned there was Czech conductor, composer and pianist Rafael Schächter. He led a chorus of Jewish prisoners in performing Verdi’s Requiem.

“Many of the Jewish prisoners did not understand why they were being asked to perform a Christian piece for the Nazis. Schächter explained to them that they could sing to the Nazis what they could not say to them – that they would be judged for their actions,” said Bradley Ellingboe, professor and director of choral music in the UNM College of Fine Arts.

“This is a story that needs to be told. The Nazis sent artists and musicians to Theresienstadt – the German word for Terezín – to organize cultural life including music and plays. Schächter found a piano and played folk songs and taught people to sing,” Ellingboe said.

Schächter brought Verdi’s Requiem with him, taught it to his fellow prisoners and they performed it many times, even as their numbers dwindled as they were shipped to their deaths. Schächter died at Auschwitz, at age 39, one month before his country was liberated.

Ellingboe is bringing Sidlin to UNM to serve as guest conductor, when UNM presents the Defiant Requiem on Thursday, May 8 at 7:30 p.m. in Popejoy Hall in the UNM Center for the Arts. 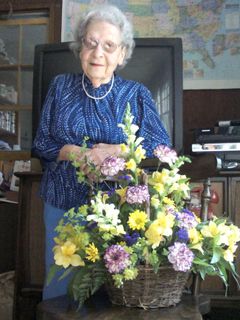 Marianka May, a special guest for the performance, was one of Rafael Schächter's performers at Terezín.

Other UNM events include a panel discussion that explores social movements for change led by artists worldwide, including recent and historical examples in the U.S., the Philippines and Egypt. Additionally, the film Defiant Requiem: Voices of Resistance will air in conjunction with the performance of the requiem.

For a schedule of events, visit: Schedule of Events. For ticket information, visit: UNM Ticketing Services.

One of those singers, Jim West, a member of the Cheyenne tribe, feels a special bond to those who suffered at Terezín. “Jim sings in the University Chorus. He wrote me a letter explaining how he relates to the story – the systematic eradication of a people,” he said.

Another special guest is Marianka May, who sang under Schächter at Terezín. “She was released from the prison camp on May 8, 1945 and has considered that day her birthdate ever since. This is why we chose that date for the performance,” Ellingboe said.

As CBS reported in 2007, “Music flourished in the camp—it was like a Julliard for Jews. There were classes and concerts in cellars and attics. The hottest ticket in town was Brundibar, written by a Czech Jew and smuggled into the camp.” 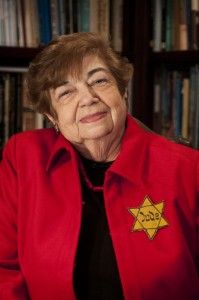 Brundibar is a children’s opera that was performed 55 times. It is a fairy tale of a young brother and sister who are helped by a cat, a dog, a bird and village children to defeat an evil organ grinder named Brundibar. The opera ends with a victory song.

One child, Ela Weissberger, played the cat in every performance. Weissberger comes to see the UNM Children’s Chorus perform Brundibar, under the direction of Regina Carlow. Three performances are featured.

The performance was a way the Nazis used to trick the Red Cross. The Nazis produced a film to show how the camps were a model town and they invited the Red Cross to inspect it. “Central to the deception was the performance of a children’s opera called Brundibar,” CBS reported.

Of both the Defiant Requiem and Brundibar, Ellingboe said, “This is a story of the triumph of the arts of giving hope in the bleakest of time. For the performers at Terezín, singing was something to look forward to – something to think about through suffering.”