Daniel Banuti, an assistant professor of mechanical engineering at The University of New Mexico, has been selected as the principal investigator of a three-year, $600,000 grant from the Department of Defense. In a collaboration with Robert A. Frederick Jr. of the University of Alabama in Huntsville, the project will study new ways to understand and simulate high-pressure injection.

While the target application is rocket engines, gained insight can be applied to other fields from car engines to green energy due to the similarity of the physical processes. 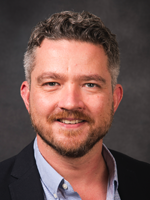 “It doesn’t matter if it’s happening in a rocket engine or a solar-thermal receiver, if we understand one of these systems better, we understand all of them better,” Banuti said.

The project, called “A new paradigm for transcritical injection simulation and understanding,” begins July 1 and ends June 30, 2025. Its key feature is a strong interaction between experiments and simulations, where Banuti is responsible for the modeling and simulation part, and Frederick, director of the Propulsion Research Center at the University of Alabama in Huntsville, leads the experimental efforts.

“I cold-called, and I’m excited he wanted to collaborate,” Banuti said. “There aren’t that many people doing the very difficult experimental research in this area. The UAH Propulsion Research Center has facilities to test and expand our understanding of what is going on in a rocket engine.”

Huntsville is also home to the NASA Marshall Space Flight Center, which has roots from the beginning of the Apollo program 60 years ago.

Banuti specializes in modeling how the injection process works in engines, studying fluid mechanics with complex thermodynamic behavior, such as supercritical fluids, high-pressure real-fluid behavior and combustion. He calls his research group “thermo-fluids under extreme conditions.”

This DEPSCoR project involves fundamental research that will expand upon work that was conducted in the 1990s that revolutionized the field. He said that before, it was believed that when fluids were injected into an engine at high pressures that there would always be droplets, much like from spraying a garden hose. However, about 20 years ago, that was found to not be the case in all super-critical environments, even though researchers didn’t know the details of why that wasn’t the case.

“We still cannot reliably predict when there will be droplets and when not,” Banuti said.

Today, new modeling and simulation techniques could shed light on exactly what is going on inside an engine at high pressure and temperatures.

“There is still a lot we don’t understand about how rocket engines work,” Banuti said. “We can build engines, we can run simulations that give reasonable results, but fundamentally we don’t understand many of the underlying physical details. The current state-of-the-art model was groundbreaking at the time, and we now are seeking a different approach. The hope is we can get a better understanding and ideas for new injector designs and modeling techniques.”

The modeling can then be translated into real-life tests in the specialized rocket labs in Alabama, which in turn can be used to validate the models.

Banuti said getting this grant is one of the high points of his career so far. Before joining UNM in 2019, he was a postdoctoral scholar at the NASA Jet Propulsion Laboratory in California/Caltech, Stanford’s Center for Turbulence Research, and a staff scientist at the German Aerospace Center.

“I am super excited to get this grant and to be able to start the collaboration with Huntsville,” he said. “It means a lot to me personally and professionally, and it came at just the right time.” He said he hopes it’s the first of many large-scale projects. Banuti is currently part of a Department of Energy initiative to promote clean hydrogen technology.