This award – the most prestigious that ANLE has granted since 2012 – recognizes the professional trajectory of those who have contributed with their research, projects, and publications to the knowledge and diffusion of the Spanish language, literatures and Hispanic cultures of the United States. The award is granted annually to individuals or legal entities resident in the United States and consists of a diploma, an artistic plaque and a commemorative medal. 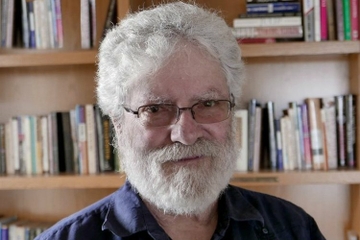 The prize is awarded by jury to an outstanding candidate for his research projects that clearly distinguish him as an authority in the field of folklore studies and ethnopoetics, consisting of the documentary and ethnographic recovery of primary sources, their analysis and interpretation, and also the development of theories profiling cultural hybridity and the cultures of the southwest borderlands of the United States.

“We are proud of the work of a jury that has analyzed and evaluated with equanimity the background of the candidates, arriving at a decision that recognizes the figure of Enrique R. Lamadrid as an eminent representative of the values that the National Prize “Enrique Anderson Imbert” tries to foment: dedication to teaching, research, academic production, and a wide variety of professional cultural and artistic services in many fields and areas of knowledge, with the goal of promoting knowledge of Hispanic culture in the United States,” said ANLE Honorary Director Gerardo Piña-Rosales.

“As a literary folklorist and cultural activist, I am proud to humbly accept this high honor as a participant in a long tradition of Hispanic, Mexican, and Chicano studies in New Mexico and the southwest United States,” said Lamadrid. “This rich tradition begins with Aurelio Macedonio Espinosa in the late nineteenth century, and continues with Juan Bautista Rael, Américo Paredes, Jovita González, Arturo León Campa, Rubén Cobos, Luis Leal, María Herrera-Sobek, John H. McDowell, José Limón, Manuel Peña, Guillermo Hernández, and many other researchers who understand how the millennial Spanish and emergent Mexican traditions take root and adapt to the cultural landscapes of North America from 1598 to our own times. This great mestizo patrimony, in constant linguistic and cultural evolution, links us to the whole Hispanic world and with the most profound values of the nation that we have worked so hard to build.”

The jury composed of nine ANLE members, the Association of Academies of the Spanish Language (ASALE), and Pan-Hispanic educational and cultural institutions in the United States as well as abroad, based its decision on the recognition of “his extraordinary contributions to the knowledge and promotion of cultural production in the Spanish language of the United States, whose recovery, preservation, translation, and diffusion he has dedicated his brilliant academic and creative career for almost half a century of prolific work as a researcher, teacher, and critic whose vocation has been to strengthen intercultural dialogue within the nation as well as in the broad context of the Pan-Hispanic world.”

“Professor Lamadrid’s teaching profile is that of an educator of researchers who has trained his students in field work, joining theory with praxis to illuminate analysis and documentation,” said Carlos E. Paldao, secretary of the competition. “In the course of his inquiries, it is evident that Professor Lamadrid has made seminal contributions to the knowledge of the Hispanic cultural roots and heritage in the southwest United States, with more than a hundred publications, which include books, articles in refereed academic journals, chapters in anthologies, encyclopedia articles, essays, and numerous works of cultural transmission and scientific dissemination.”

Lamadrid, who is also the former director of Chicano Hispano Mexicano Studies, has teaching and research interests including Southwest Hispanic and Latin American folklore and folk music, Chicano literature, and literary recovery projects. He has done fieldwork with students all over New Mexico, as well as in Mexico, Spain, Colombia, and Ecuador.

He is active in international education and is co-founder and director of UNM's CONEXIONES Program. Lamadrid has served as a field worker and presenter for the Smithsonian Institution's Festivals of American Folk Life, and has done extensive work for the Museum of New Mexico and National Hispanic Cultural Center. As an academic curator, he has worked with numerous exhibits with his students and headed the design team for the Camino Real International Heritage Center.

Lamadrid earned his BA in English from UNM (1970), and his Master's and Ph.D., both from the University of Southern California (1978).

As with previous honorees, the award granted to Lamadrid in 2019 highlights the sustained vigor of Pan-Hispanic studies in the United States.