University of New Mexico researchers are studying a newly discovered hormone that releases from muscle after exercise. Irisin, named for the Greek “messenger” goddess Iris, may prevent breast cancer and boost the effects of chemotherapy drugs used in breast cancer treatment.

Studies suggest women who exercise regularly have 30 to 40 percent reduced risk of breast cancer and improved survival rates if they have the disease. Even though research indicates that hormones play a major role, a solid link had yet to be established. Irisin, originally discovered by researchers at Harvard Medical School, was shown to increase with exercise and to stimulate metabolism in select tissues, such as fat.

“Chemotherapy can have devastating side effects. Sometimes they are so severe that treatment regimens are disrupted. So the possibility of a method to decrease the effective dose is very exciting. Our next steps will be to test irisin against other cancers, and to figure out how to best deliver irisin to the cancer cells.” – Assistant Professor Christina Trujillo

Our hard-working hormones
Various types of hormones continually send messages from our tissue and endocrine glands to nearly 37 trillion cells in the human body. They travel throughout the body, either in the blood stream or in the fluid around cells, looking for target cells. Once they find a target cell, they bind with specific protein receptors on the surface or are transported to the interior, and purposely change that cell's activity.

Hormones differ in their selection of targets. Some of them bind with compatible receptors found in a variety of cells all over the body. Other hormones are more specific, targeting only one or a few tissues. For example, estrogen, the female sex hormone, can regulate function by binding to special estrogen receptor sites in the uterus, and bone and breast cells.

“During exercise the body releases lots of hormones and tiny molecules into the bloodstream that target and bind to various organs,” said Nick Gannon, a recent graduate of the UNM Department of Biochemistry and Molecular Biology. “They cause changes inside of the cells. So generally when you exercise these hormones and molecules have profound effects on the whole body.”

Vaughan, Gannon and Christine Mermier, UNM assistant professor of Health Exercise & Sports Science collaborated on the irisin and exercise study. Vaughan’s ongoing collaborations in both departments during his graduate work at UNM fostered the link between exercise physiology and biochemistry research. 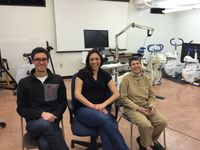 Exercise and improved cancer rates
“The association between exercise and improved cancer rates/mortality is strong, so it was only logical that our team pursue the link between chemicals produced during exercise and breast cancer survival,” Vaughan said. “Others were looking at how exercised muscles communicate with the body to cause overall effects. But our team at UNM was curious what, if anything, irisin might do for cancer,” Gannon added. “No one had looked at that yet, so we were the first.”

The findings were remarkable. Irisin was administered to both non-cancer and cancerous cells which selectively killed aggressive cancer cells without negatively affecting normal cells.

The UNM team measured different markers such as inflammation and apoptosis (cell death) and observed a 22-fold increase in cancer cell apoptosis compared with untreated cells. In addition, combining irisin treatment with doxorubicin, a commonly used chemotherapy drug to treat breast cancer, significantly increased the destruction of cancer cells at all concentrations, lowering the effective dose of the chemotherapy by approximately 100-fold, though cells absorbed less of the drug. This raises the possibility that a lower, more tolerable dose of chemotherapy could be given to patients.

Kristina Trujillo, assistant professor in the School of Medicines Department of Biochemistry and Molecular and the study’s senior author, said, “Chemotherapy can have devastating side effects. Sometimes they are so severe that treatment regimens are disrupted. So the possibility of a method to decrease the effective dose is very exciting. Our next steps will be to test irisin against other cancers, and to figure out how to best deliver irisin to the cancer cells.”

Irisin sticks around long after work out
“The original study performed at Harvard showed that after mice ran on treadmills, the irisin was still in their bloodstream 12 hours after exercising,” Mermier said. “Then a six-week study was conducted with humans. The first group did endurance type training, the second group did aerobic exercise. The first group had double the amount of irisin in their system than the second group. Exercise is key.”

“A great deal of research is published and then goes into a huge database online which, for the most part, many people never see,” Gannon said. “But our research is already being translated to the public. And while the crux of the work is the effect of irisin on breast cancer, the underlying message is that exercise is important for overall health and quite often the best preventative medicine there is.”

For those individuals intimidated by the word exercise, Mermier said that there is no need to run a marathon or spend hours in the gym. “Just get up and start moving,” she said. “Walking after every meal is a great place to start. Once the muscles are in action, irisin and lots of good chemicals get released into the bloodstream. They work hard to keep healthy people healthy and to help those with illness improve. The truth is, most cancers are caused by lifestyle factors, not genes.”