Faculty and Staff Club is now the University Club

The private club for University of New Mexico employees now has a new name. Formerly known as the Faculty and Staff Club, it’s now called the University Club.

“We are a unique venue on campus. We have been called the Faculty and Staff Club for some time, but our services are reaching beyond these defined groups,” said Amanda Gerard, the club’s manager.

This is the third name change for the club since its creation roughly a decade ago. Originally started as a place for faculty, the club expanded to include staff in 2007 as a way to offer a neutral setting for the two employee bodies to get to know one another and collaborate.

The new name is not the only recent change happening at 1923 Las Lomas. The University Club has transformed what’s being offered there too by expanding its buffet services to five days a week instead of just three. 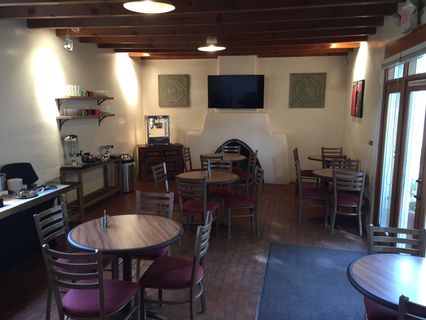 “We felt that the limited buffet was not only confusing, but was also a gap in services for our members and guests. It will be a great amenity for our campus community to be able to stop in any day of the work week and get a quick, delicious meal at a great value,” Gerard said.

University Club members will also have complimentary access to an updated conference room in addition to popular amenities like courtesy coffee and popcorn, satellite television, and variety of publications. The club also hosts a Happy Hour from 4 p.m. to 7 p.m. on Thursdays and Fridays featuring complimentary appetizers.

“The University Club is a great place to dine, socialize, meet and celebrate. Social wellness is an important part of a happy work/life balance, and we are delighted to facilitate such an environment,” said Gerard.

The buffet at the University Club is open from 11 a.m. to 2 p.m., Monday through Friday, featuring a constantly changing menu. The buffet costs $7.95 for members and $8.95 for guests. Memberships are available for $7 per month via payroll deduction and is open to all current full time, part time, retired, and emeriti faculty and staff.

For more information, contact University Club Manager Amanda Gerard at 639-6993 or via email at agerard@unm.edu.