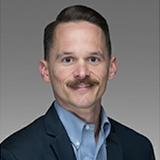 A School of Public Administration (SPA) assistant professor represented The University of New Mexico on the national stage, presenting at the 2018 AcademyHealth National Health Policy Conference (NHPC). Nick Edwardson travelled to Washington, D.C. earlier this month to be one of 18 presenters at the conference, which is designed to provide an overview and first-look at the nation’s 2018 health policy agenda.

"Understanding health policy and the impacts of coverage is so important right now because of the high degree of uncertainty surrounding the funding mechanisms and requirements for two newly covered populations—Marketplace and Medicaid expansion enrollees," Edwardson said. "Policies that further increase the costs or burdens for these two enrolled populations will lead to higher uninsurance rates and more inefficient health care consumption."

The NHPC brought together health care decision makers, advocates, consumers, patients, researchers and leaders from the public and private sectors. They discussed the most critical issues and immediate policy priorities in United States health care using the latest evidence and examples from science and practice.

“This is one of the ways our faculty play a significant role in development of public policy nationally and in New Mexico,” said Bruce Perlman, director of SPA. “Professor Edwardson’s presentation at the AcademyHealth’s National Health Policy Conference was a well-deserved recognition of his important work.”

Edwardson’s presentation, “Healthcare Coverage Pathways for the Continuously Uninsured in 2013: A Longitudinal Analysis of Demographics, Disease, Utilization, and Expenses” discussed how individuals who were continuously uninsured in 2013 changed their healthcare consumption behaviors after gaining coverage in 2014, either through Medicaid or Marketplace plans.

He examined how costs, utilization and disease prevalence varied among those who were uninsured 2013 but gained coverage via Medicaid or Marketplace in 2014 compared to those who remained continuously uninsured throughout 2013 and 2014. Edwardson also investigated how policies have likely influenced the rate and type of three uninsured categories and discussed the characteristics and implications for those who, despite policy efforts, remain uninsured throughout the study period.

Edwardson’s research was funded by the New Mexico Office of Superintendent of Insurance.