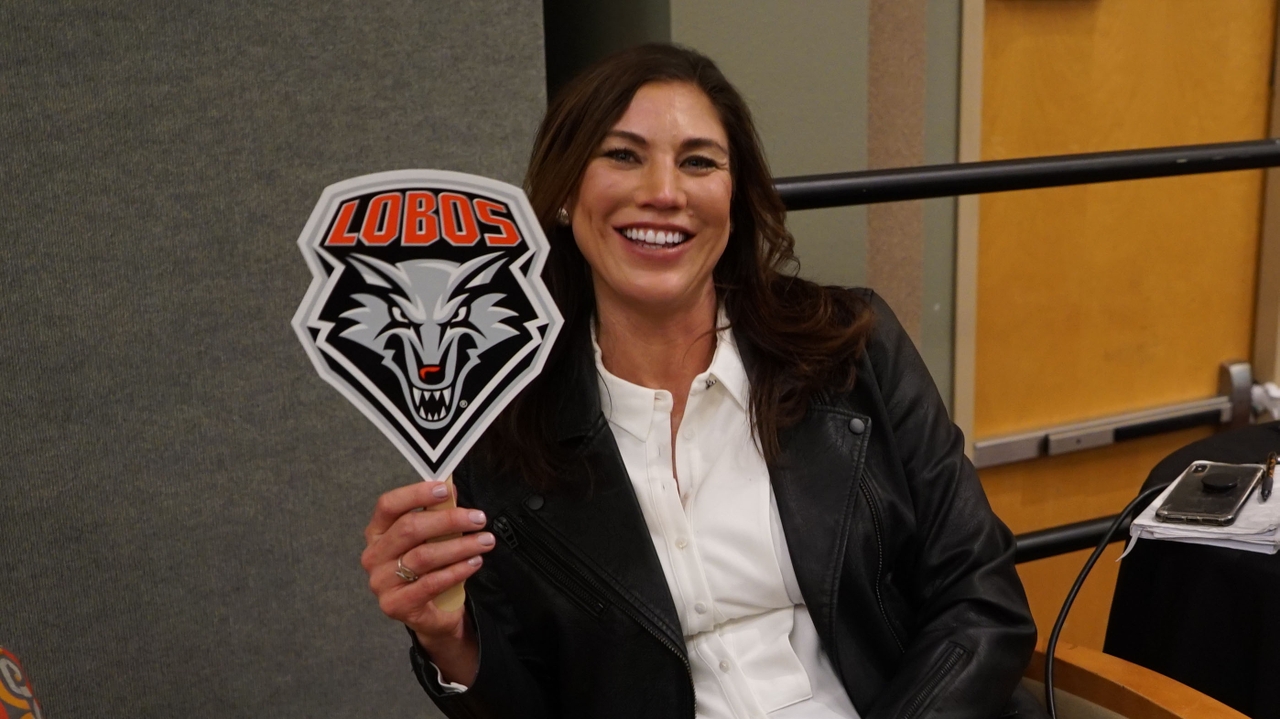 Solo answered questions about her fight for equal rights and life outside of soccer. 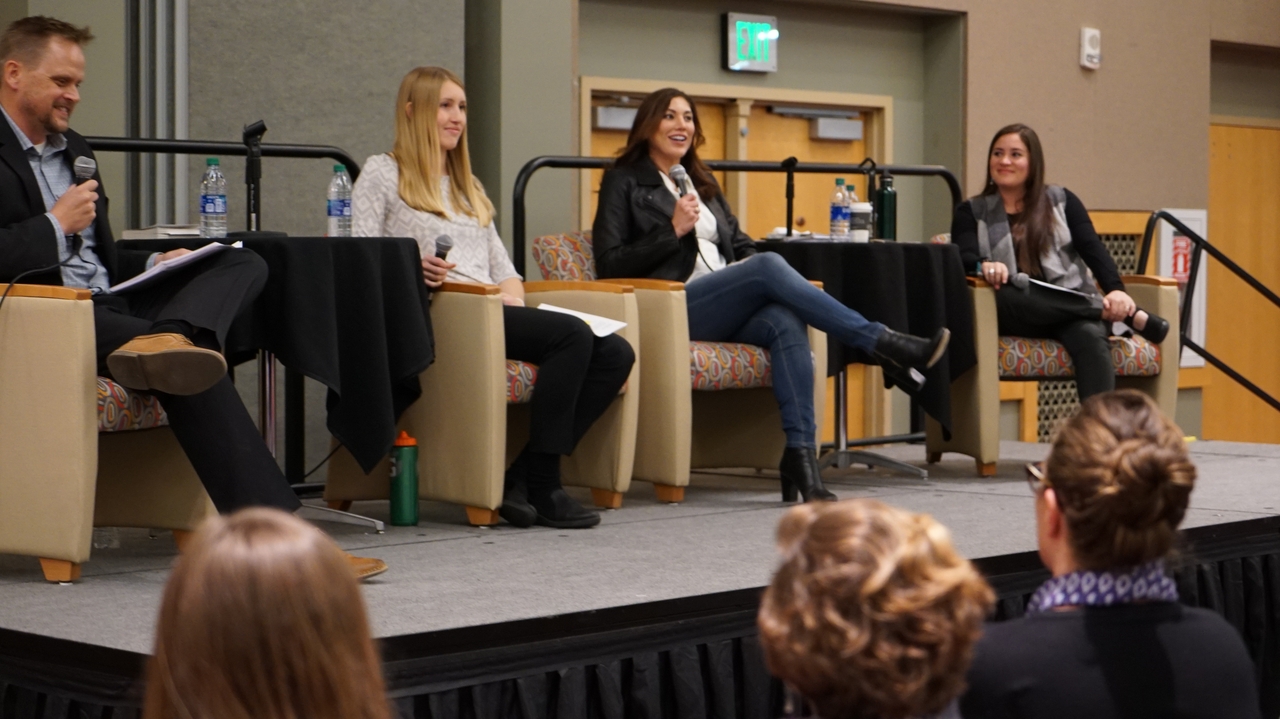 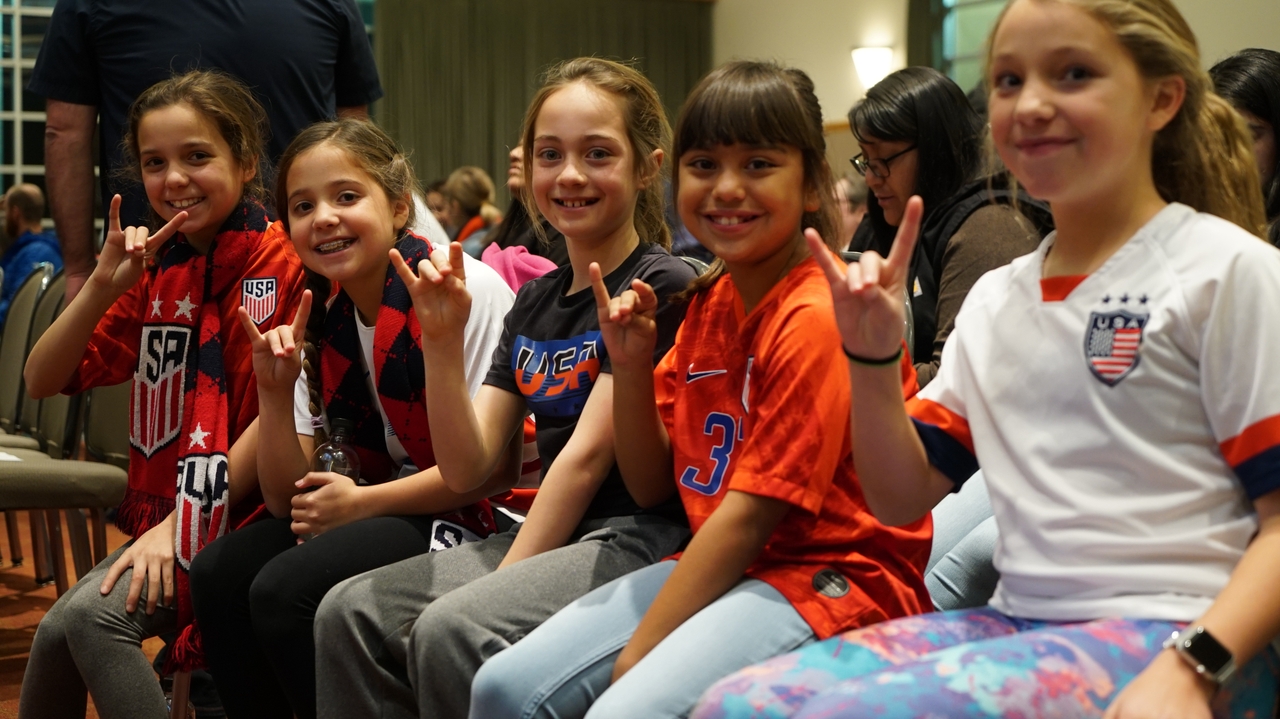 Solo encouraged young athletes in the crowd to educate themselves and to continue the fight for equality in sports. 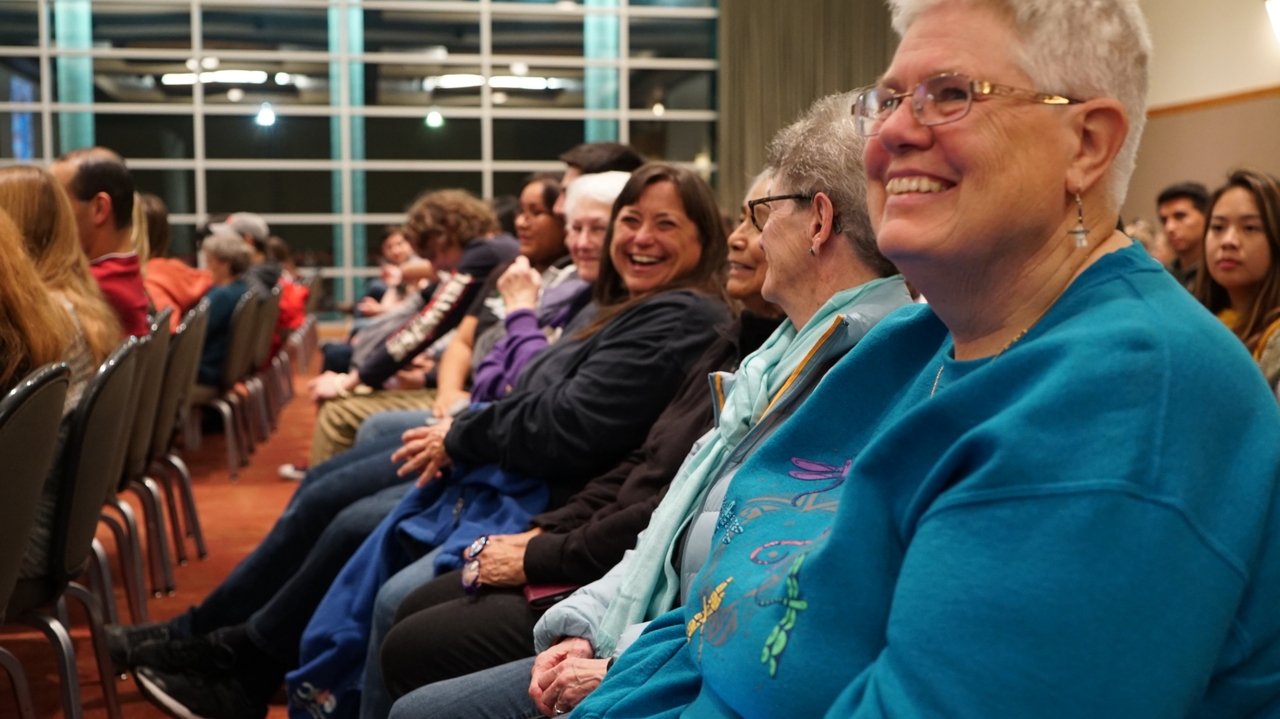 All smiles as Hope Solo takes the stage 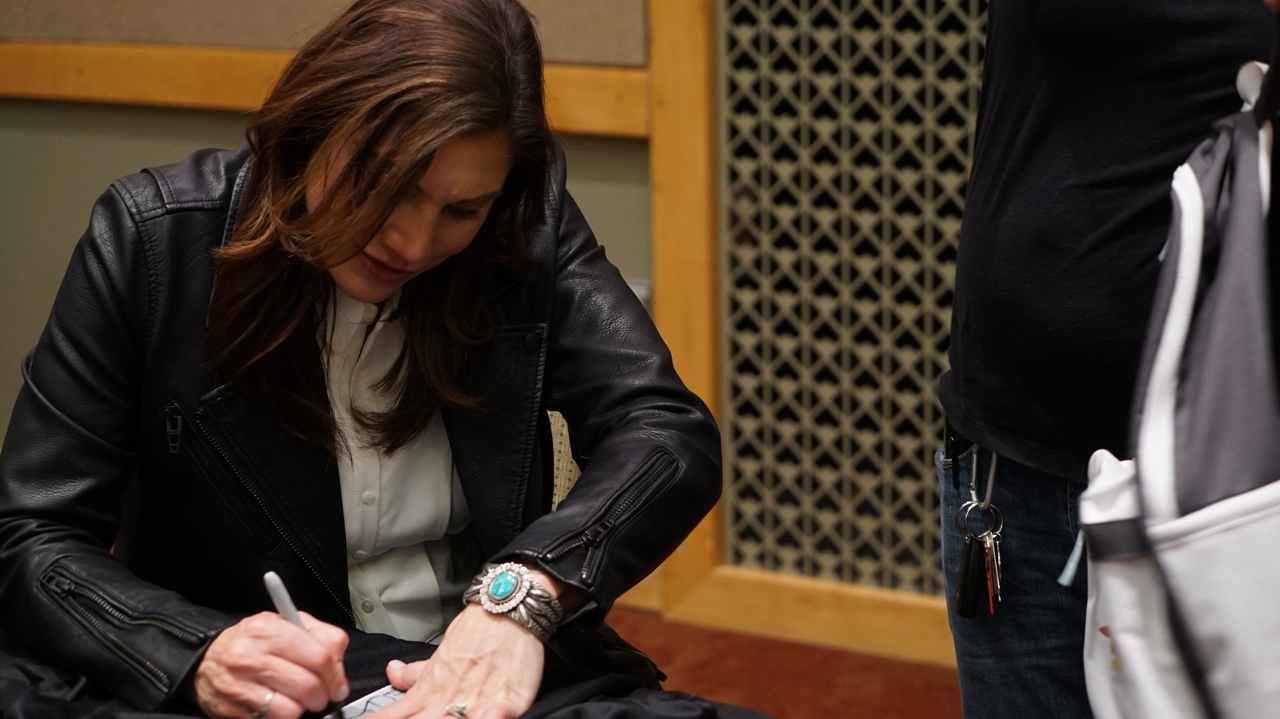 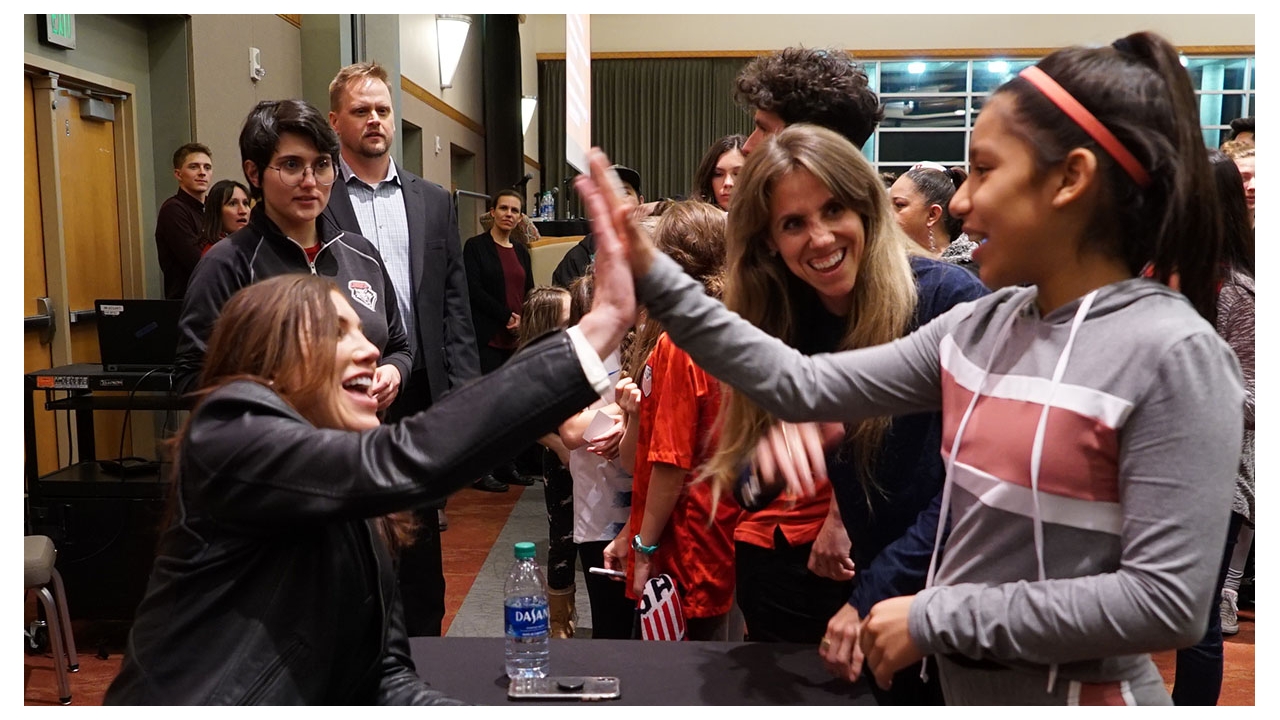 “It takes sacrifice to create change.”

That’s the message left with the more than 600 people who gathered Monday night inside The University of New Mexico’s SUB Ballrooms to hear from Olympic and World Cup Champion, Hope Solo. 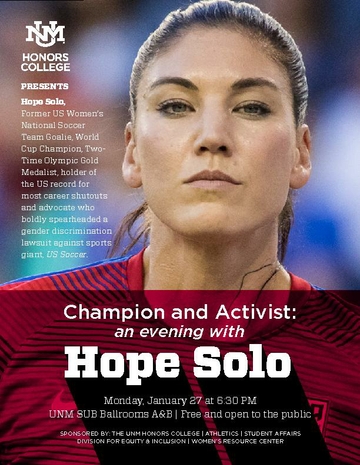 “Thank you so much for having me,” Solo said. “I’ve always had a love for UNM and a love for the City of Albuquerque.”

Solo, who is leading the push for the United States Soccer Federation to pay women salaries equal to their male counterparts, discussed her experiences growing up in Title IX America.

Title IX states, “No person in the United States shall, on the basis of sex, be excluded from participation in, be denied the benefits of, or be subjected to discrimination under any education program or activity receiving Federal financial assistance.”

“Typically, I’m a shy and introverted person but I also want to speak the truth,” Solo said. “Often I’m at odds with myself being on one of the biggest stages.”

Monday night, Hope, an equal rights activist, addressed the question: Are sports serving American girls and women well? She also discussed her life outside of soccer, as well as many highlights and controversies during her career with U.S. Soccer.

She encouraged current and future Lobos to do their research and know their rights when it comes to equality. Solo answered tough questions about being fired following the 2016 Olympics, after calling the Swedish team “cowards.”

“I was emotionally upset when we lost,” she said. “They (Swedish Soccer Team) packed the box defensively and played cowardly, but I shouldn’t have said what I said. I wanted to compete. That’s what the Olympics are all about.”

Solo ended the night by signing autographs and taking photos with dozens of people.

“Her commitment is hard core,” Future Lobo Amelia Barnes said. “I want to be a world champion who isn’t scared to speak up for what is right just like Hope Solo.”

UNM Associate Professor Ryan Swanson, who is serving a three-year term as director of the Carruthers endowment, led the lecture along with Assistant Professor Myrriah Gomez and Lobo soccer star Gwen Maly.

“Hope Solo gave us a lot to think about last night.  She explained why her challenge to U.S. Soccer for equal pay is about much more than just one team’s compensation,” Swanson said. “She prodded the audience with the point that meaningful change rarely happens without a fight—so get fighting.”

“After talking to Vince Gilligan about "Breaking Bad" and New Mexico in the inaugural Carruthers Lecture last year, and Hope Solo about equality in sports this year, we at Honors College believe that the series is now entrenched as a tradition focused on facilitating good conversation here at UNM,” Swanson said.