UNM Newsroom / News / Finding success through a lifetime of careers, not the career of a lifetime 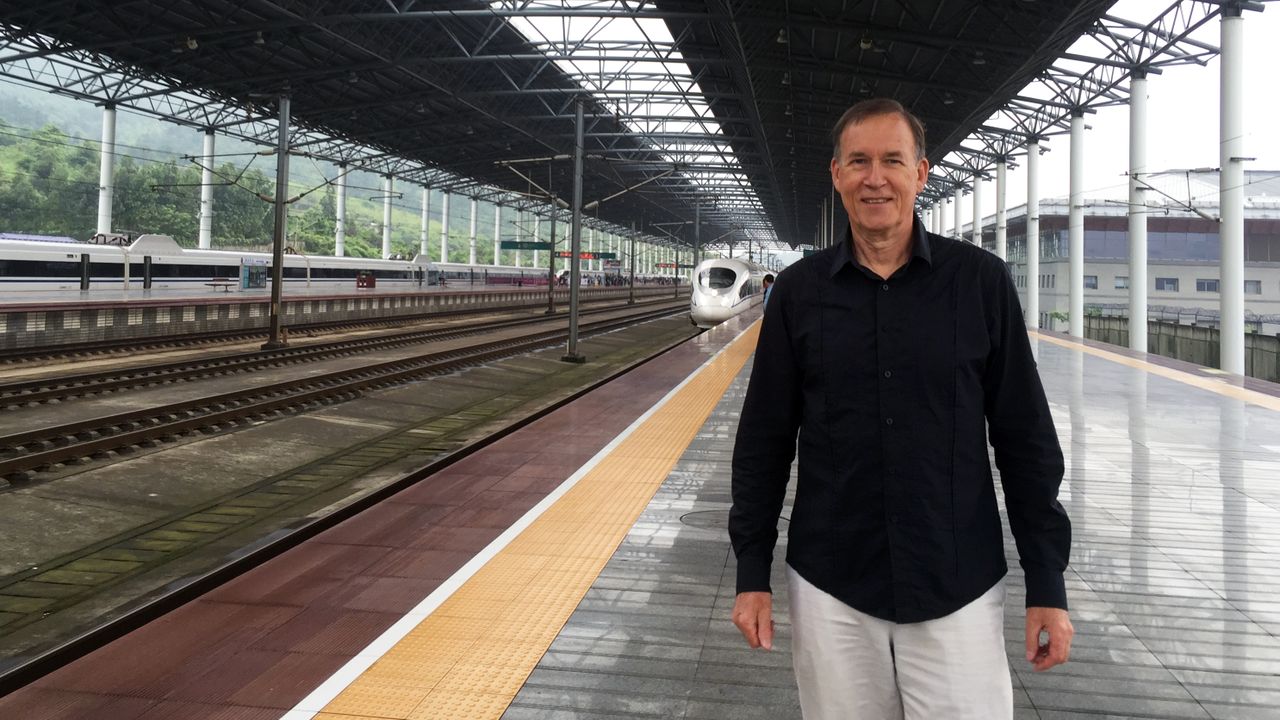 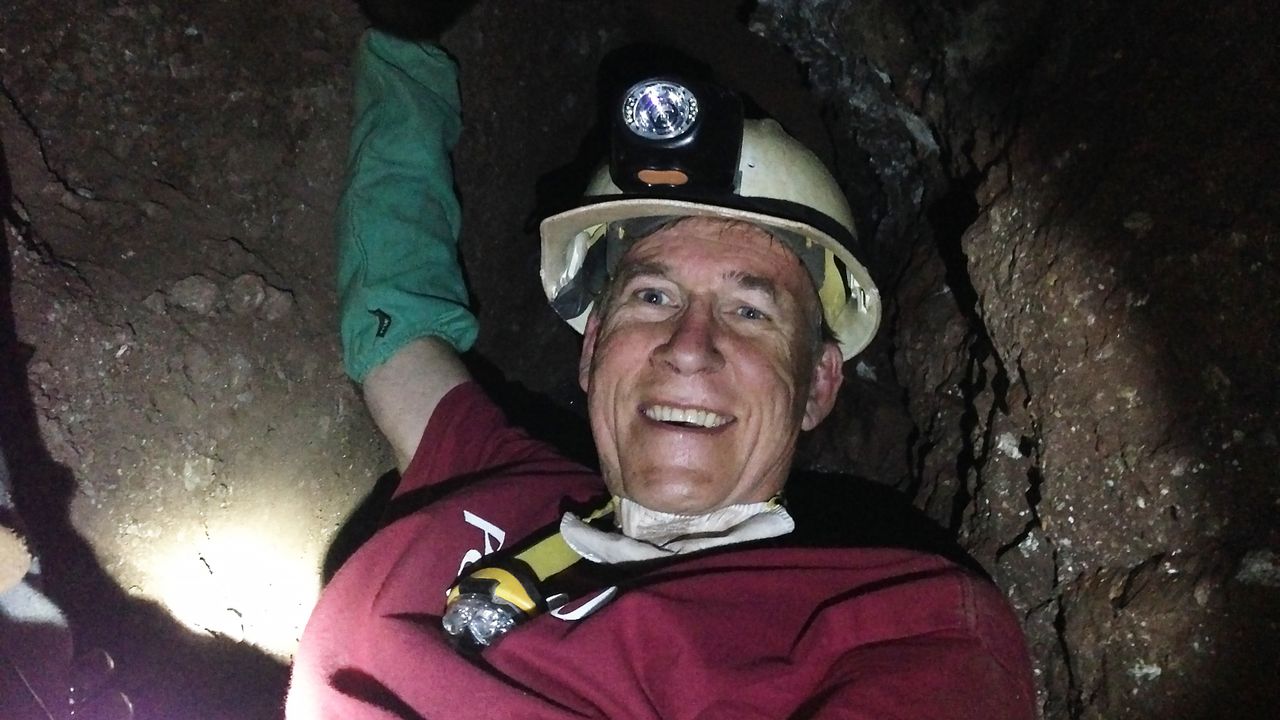 All in a day's work 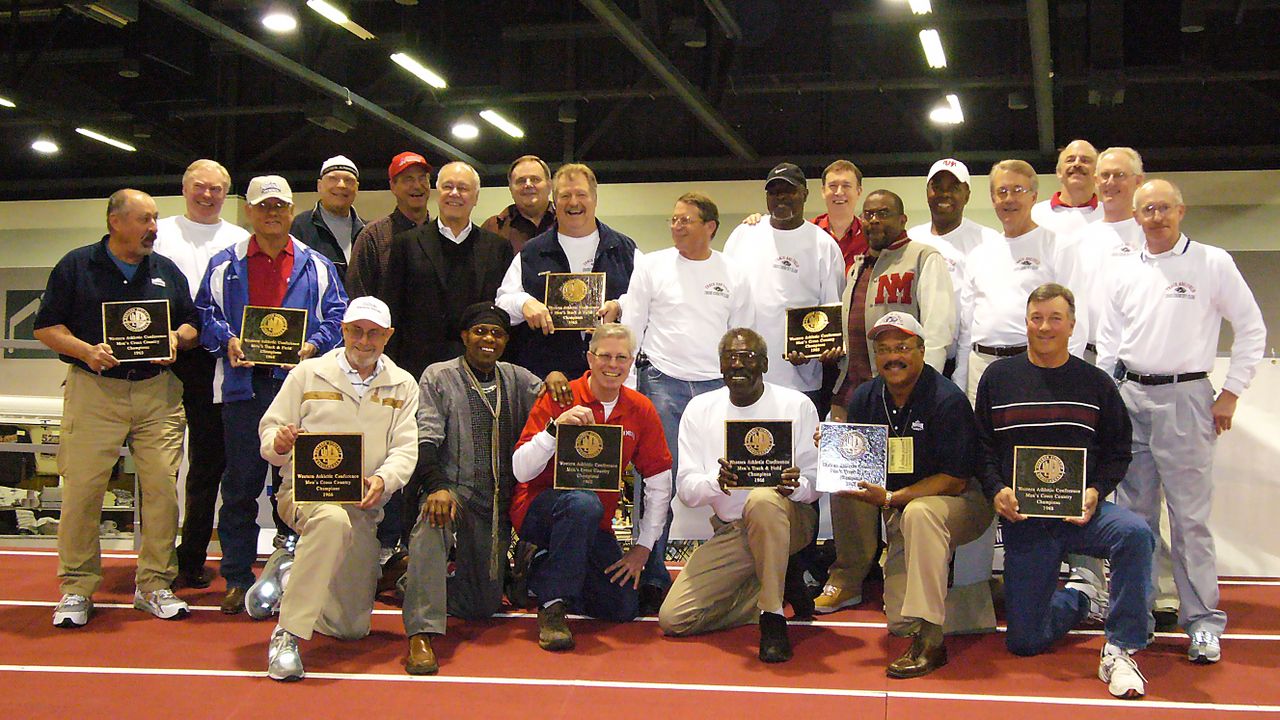 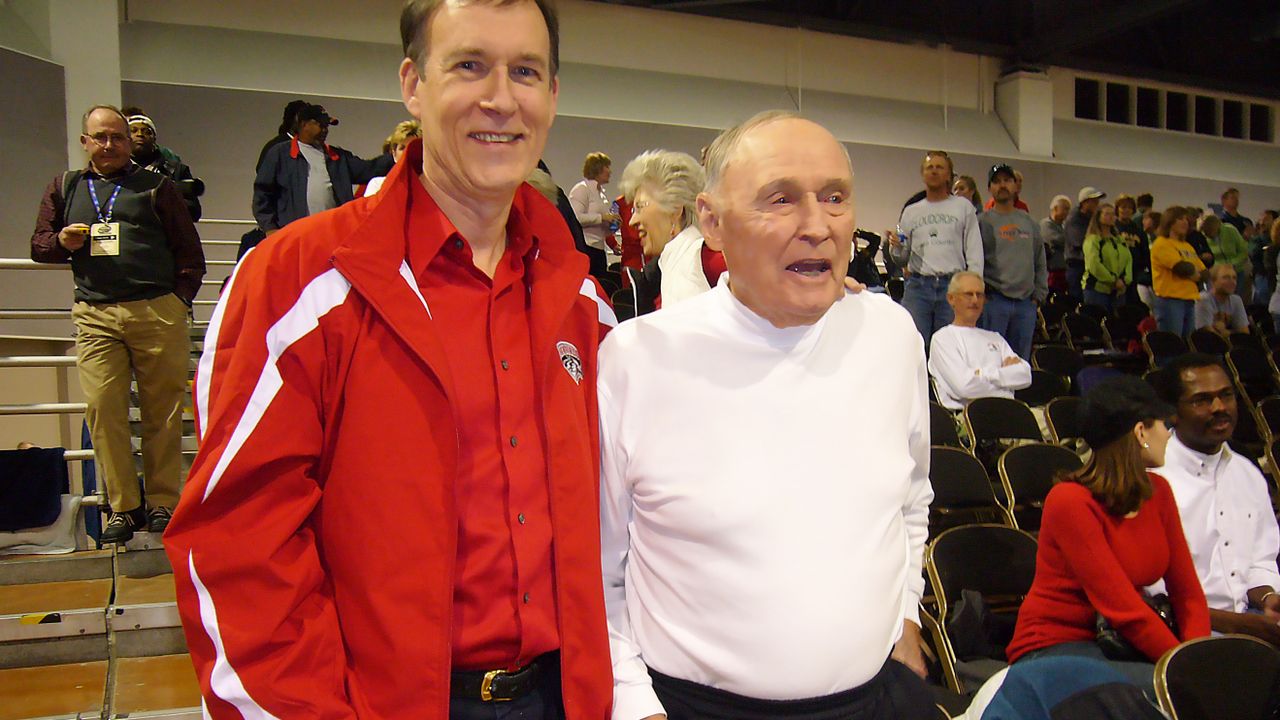 poses with Schauss at the track team reunion. 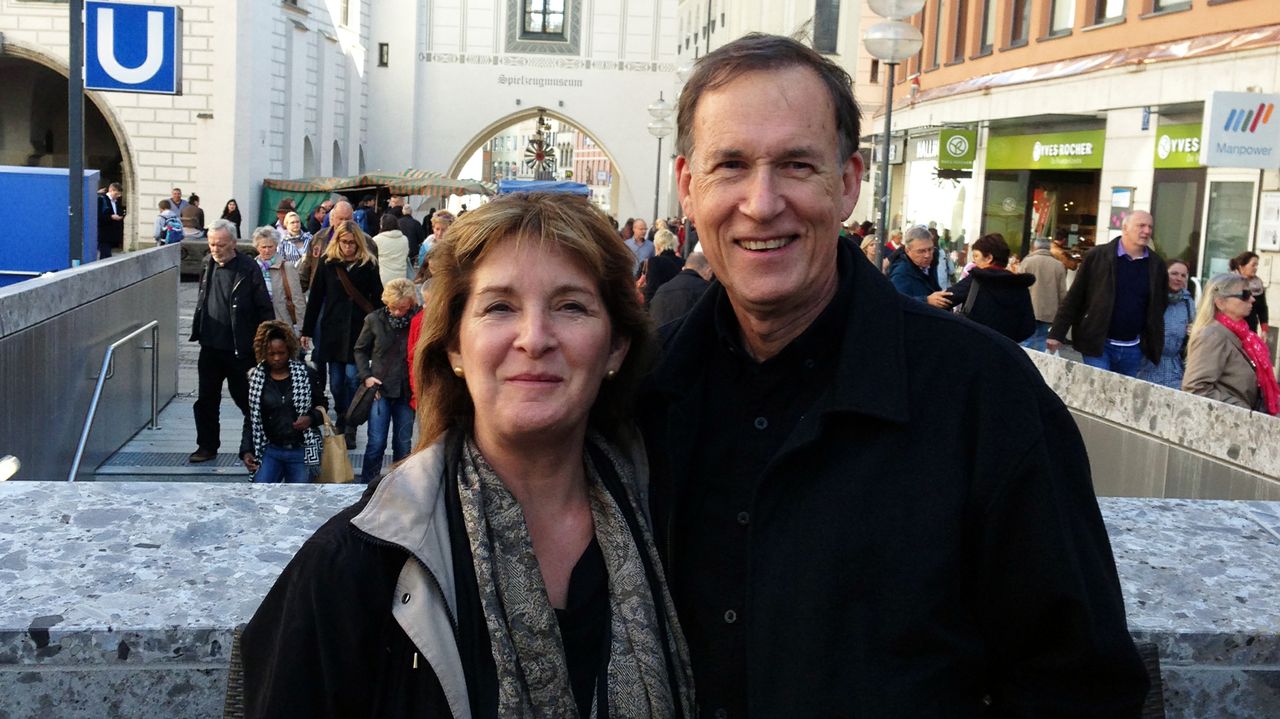 Schauss and his wife Laura in Munich, Germany.

Finding success through a lifetime of careers, not the career of a lifetime

UNM alum Alexander Schauss on his discovery of the acai berry and other notable endeavors
By Katie Williams August 03, 2017
Categories: Front Page Alumni

If you Google the name Alexander Schauss, you find a profile on a company CEO, a professor, a leading researcher, a certified eating disorder specialist and now the testimony of a past officer of the court. What appears to be multiple people is actually one person, inspired by one job, to do one thing.

How Schauss came about that one job, is just one of the unbelievable number of stories about his life, beginning with his decision to work in local government.

“I took a job with the Second Judicial Court in Albuquerque for $6,000 instead of working for Pepsi Co. for $60,000 after I graduated.” said Schauss. “I worked as a security guard for Pepsi in 1969 and discovered the Bearer bonds weren’t secured. I could have taken one and cashed it for a million dollars if I wanted to, but I let them know and was offered a job by the chairman for my honesty.”

Instead, Schauss took the job that would allow him to give back to the community where he gratefully attended the local university on scholarship.

“What changed everything for me was that I was not originally going to go to UNM. I had a four-year academic scholarship to anywhere in the United States,” said Schauss. “In 1965, I chose Brown University due to my teachers’ excitement to have the first student from my high school attend an Ivy League school.”

Schauss is also an accomplished flutist. He trained at Julliard in middle school. “I didn’t like how the strings on a guitar cut my fingers and I wanted something I could put in my pocket because I was in a gang infested neighborhood. The piccolo fits in your back pocket. If you want to run with an instrument, that’s the one I recommend.”

Schauss didn’t last long at Brown because It didn’t mirror the person he had become from his experiences growing up as a German immigrant in New York.

“I was exposed to a lot of crime growing up on the upper Westside at a time that it had the largest gang in New York City on the very street I was growing up on,” recalled Schauss. “The middle school I went to was a few blocks away from Needle Park—which had the highest concentration of heroin addicts in the U.S.”

When he started to think about other options, Schauss recalled a conversation he had with a University of New Mexico assistant track coach who saw him compete in a track meet on Randall’s Island when he was captain of his high school track team.

“I knew nothing about New Mexico,” he recalled. “The furthest west I had been was the Mississippi River. I looked up UNM and found Hugh Hackett, the track coach was NCAA Coach of the Year and the team was undefeated and I like winners—I asked other runners and they said New Mexico was the best track team in the nation by far and it will continue to be.”

Schauss arrived at UNM in August after taking the last available ACT test.

“I went into the coach’s office and said here I am and he said who are you,” he laughed. “After rattling off my times, although other people on the team were faster than me, Coach Hackett was kind enough to put me on the team.”

He added, “The team was great and the comradery was terrific, the coach was outstanding and what was most important were the classes at UNM—I had wonderful professors. Everybody I took a course with, I learned a lot from. They not only taught me how to remember certain things, but how to think. And I thought that was something special about UNM. Also, I loved the cultural diversity. It was a place I was at home with.”

During Schauss’ junior year, he was on the last mile of a 23 mile run when he tore the bursar in his knee—ending his track season and his bid to make the 1968 Olympic track team. From that day on, his focus shifted from track to academics, which is something Schauss looks back at now and says, "It must have been meant to be." 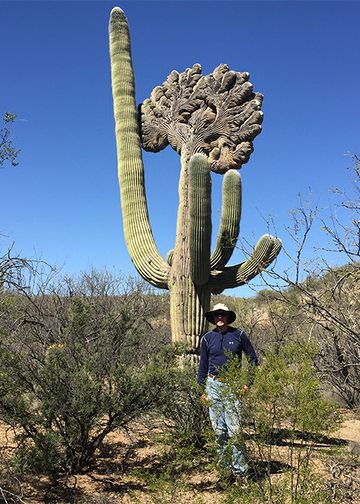 Alex Schauss besides a rare mutation of the crested saguaro (Carnegiea gigantea) taken at Saguaro National Park in Tucson.

Traveling back and forth from New Mexico to New York, Schauss was able to expedite his bachelor’s degree in history while doing scientific research.

“I spent a lot of time in libraries trying to figure out what was happening to my peers. I saw 10 to 14-year-olds prostituting to support their drug use,” he recalled.

During his research, Schauss found a 1950s article on Vitamin C, and through controlled experiments in mice at UNM, he came up with a way to use Vitamin C to attenuate the withdrawal syndrome associated with heroin addiction.

“It was extremely effective and worked. It attracted the attention of the Nobel Laurette Dr. Linus Pauling who won two Nobel Prizes. He was interested in the research and subsequently became my mentor.”

Pauling encouraged Schauss to stay in the academic, not business, world, but that summer Schauss accepted the job with the court, always knowing he’d be back to science. It was that job that changed Schauss.

Working as a juvenile parole officer, Schauss was confronted by a serious felon name Titus. He was charged with 24 felonies, and for the first time Schauss was considering institutionalizing a young boy.

“Before I did, the judge had me find a doctor who could examine him. The doctor figured out why the 14-year-old was committing crimes; he had Klinefelter's Syndrome. He was both male and female—growing up in a machismo society,” said Schauss. “It was a turning point for me. I needed to hit the books and learn more about things that contribute to crime and that was the beginning of my discovering the role of nutrition—lead poisoning, food allergies and all kinds of other things, that contribute to antisocial behaviors.”

"For students trying to find their passion, I say,  just keep searching you’ll find it. Don’t think it’ll hit you in the very first class you take."      —Alexander Schauss

Schauss continued at UNM in order to obtain a master’s degree. His education at this point was funded by the Department of Justice.

“During my master’s study in guidance and counseling, that’s when we created a very famous program — The First Offender Program. Realizing juvenile delinquency wasn’t about delinquency, it’s about these young people and their families. I wanted to develop a program that helped the juveniles and their families as well,” said Schauss.

Dr. Ross Snyder, professor of psychiatry at the UNM School of Medicine, helped with this eight-week program. It was extremely successful and was emulated all over the nation.

“I also spoke with service groups all around Albuquerque encouraging them to speak with their legislators and explain to them that in order to reduce crime, we needed more money for higher salaries to attract better students to the field,” added Schauss. “Between that and the First Offender Program, within two years Bernalillo County went from number one in felonies in the U.S. to not even in the top 100.”

Schauss went on to obtain a Ph.D. in psychology and continued his studies in nutrition.

“I had a license to practice as a mental health specialist. I treated eating disorders for over twenty years. I was one of the few males that was certified in the country. That was in part due to my experience at UNM.”

In 1995, Schauss’ research garnered him one of his most noteworthy career accomplishments. That year, he was one of the leading researchers to discover a fruit, from an Amazonian palm tree, that has the richest antioxidant properties of any food in the world—the acai berry.

“After making the discovery, I collaborated with the USDA with Dr. Jim Joseph, a world-famous antioxidant researcher and we started research going on for the last 22 years. A few years into that research, we discovered the most potent anti-inflammatory compound found in nature in that same fruit,” he said. 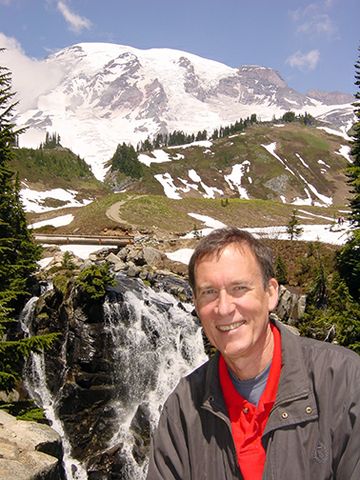 Schauss at the waterfall at base of Mt. Rainier.

As Schauss continues his research, he currently holds two appointments at the University of Arizona in Tucson. He is also the CEO at AIBMR Life Sciences, a company he founded.

“I decided to take my research private to focus on developing real science behind dietary supplements, what we call functional foods, nutraceuticals,” said Schauss. “We have become the leading institution in the country to prepare determinations as to whether ingredients should be added to food in the U.S.—generally recognized as SAFE ingredients. Every single submission we have made over the past twenty years, has been approved by the FDA, so we have a 100 percent success rate in getting ingredients experimentally tested for their safety before they are incorporated into our food system.”

With multiple careers and accomplishments, Schauss looks back fondly at his work for the court, work that ignited his passion.

“My legal background was exceptionally valuable,” he said. “In terms of doing research and investigations, you get good at asking questions. And a good scientist, I learned, are people who know how to ask good questions. And there’s one thing about science, although you read about it and have heard it, it doesn’t necessarily mean it’s true.”

His passion for figuring out how to help people propelled Schauss in his career. He believes it’s what college students need to find in order to be successful.

“For students trying to find their passion, I say, just keep searching you’ll find it. Don’t think it’ll hit you in the very first class you take. Somewhere along the line, you’ll find a teacher, even a graduate student who can guide you in the direction. And be prepared, you may have several careers in your life. Take one at a time.”