Tiffany Florvil, associate professor of History at The University of New Mexico, is one of 20 recipients of the Berlin Prize for fall 2022 from the American Academy in Berlin, Germany.

Florvil will work on a biography of the prominent Black German poet and activist May Ayim. The biography, titled Borderless and Brazen: The Life and Legacy of May Ayim, 1960-1996, will offer the first full-length study on Ayim’s political and intellectual corpus. 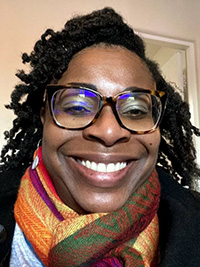 Florvil is a historian of the modern and late modern period in Europe, especially social movements, gender and sexuality, emotions, and the African diaspora. She is the co-chair of the Black Diaspora Studies Network at the German Studies Association, in which she has organized numerous panels and roundtables. She also is a digital humanist, serving as the co-founder, network editor, and advisory board member for H-Black-Europe and a co-founder and network editor of H-Emotions.

Florvil joined the UNM Department of History in 2013 as a historian of Comparative Women's and Gender in Europe.  Her areas of interest include race and ethnicity, gender, identity formation, social and cultural movements, black internationalism, intellectualism, diasporas, and emotions.  Her familial connections to the Caribbean and experiences attending schools in Germany, Florida, Wisconsin, and the South as well as working at a research institution in London, England have informed her pedagogy, shaping how she works with diverse.

The Berlin Prize is awarded annually to American or US-based scholars, writers, composers, and artists who represent the highest standards of excellence in their fields, from the humanities and social sciences to journalism, public policy, fiction, the visual arts, and music composition. Chosen by an independent selection committee, the 2022-23 class of fellows will pursue a wide array of scholarly and artistic projects.

The Berlin Prize provides recipients the time and resources to advance important scholarly and artistic projects, free from the constraints of other professional obligations. Fellows work throughout the semester with Berlin peers and institutions in the Academy’s well-established network, forging meaningful connections that lead to lasting transatlantic relationships. During their stays, fellows engage German audiences through lectures, readings, and performances, which form the core of the American Academy’s public program.