Davis, who served as UNM's 11th president, took office at UNM in July 1975 and served until 1982. During his tenure, he focused on what he called centers of excellence and tried to counterbalance the avalanche of bad press UNM had received since the late-1960s. He compiled 25 of UNM’s national-caliber departments and talked about them at nearly every venue in which he spoke, and always tried to highlight the diversity of UNM’s academic achievement, pointing to the university’s flagship status in the state.

Davis continued the presidential sponsorship of the Annual Research Lecture, spotlighting a curious debate among the faculty concerning whether research contributed to strong teaching or undermined it. Since the beginning of his presidency in 1975, Davis had increased the faculty by 217 positions, and had overseen a 65 percent raise in faculty salaries in seven years. He created an outstanding teacher award and moved the regents to create a Regents’ Meritorious Service Medal. 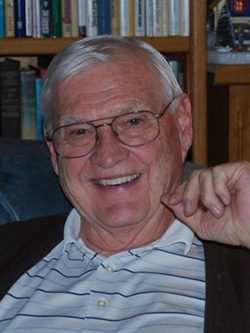 Additional accomplishments included UNM Medical School funding, which jumped from $4.9 million to nearly $21 million. North Campus increased in size under the direction of University Architect Van Dorn Hooker, which included the Bratton Hall expansion, the Children’s Psychiatric Hospital, the Family Practice Center and North Campus Bookstore, the Dental Hygiene Building, and the Health Sciences Learning Center. The Davis years also saw the construction of the Art Building, the UNM Stadium Press Box, and the Biomedical Research Facility, as well as renovation of the Student Union Building.

Programs that were created during Davis’s tenure included the Presidential Scholarship Program, the Office of Student Financial Aid and Career Services, the Latin American Institute, the Southwest Hispanic Research Institute, and the UNM Foundation. He was also instrumental in creating the Los Alamos and Valencia County branch campuses.

Davis began his career in education in 1954 as an English teacher and track coach at Loveland High School in Colorado. His track team won the Northern Colorado Championship and State Championship in 1955. In the fall of 1955, Bud, and his wife Polly, moved to Rapid City, S.D. where he taught English and coached football. On the gridiron, his Rapid City High School teams finished second in South Dakota in 1955, 1956, 1957, and 1958. Later, in 1959, they returned to Greeley, Colo. where he taught English, pursued his master’s degree in administration, and coached football. He was named High School Coach of the Year by the Rocky Mountain News after leading his team to a Colorado State Championship.

Davis returned to the University of Colorado in 1960 to serve as alumni director and begin his doctoral studies in higher education. He was hired as CU's head football coach in March of 1962. Following the season, he was appointed as Dean of Men and resigned as head football coach. In the spring of 1963, after earning his Doctorate in Higher Education, he was hired as executive assistant to the President for Student Affairs at the University of Wyoming in Laramie.

Davis was born Feb. 15, 1929 in Wamego, Kansas, and grew up in rural Kan. He moved to Loveland, Colorado with his family when he was 16. Upon arriving in Colorado in 1944, he met Pollyanne Peterson and promptly informed her she would be his future wife. Bud graduated from Loveland High School in the spring of 1947 and followed Polly to the University of Colorado.

Seven years after arriving in Colorado, Bud and Polly were married on March 17, 1951. As an undergraduate, Bud was a top scholar, president of the student body, and a varsity football player. In May 1951, he earned a BS in Physical Education and English and joined the US Marine Corps in 1951. As an enlisted man during boot camp, Davis earned an opportunity to attend Officers Candidate School in Quantico, Va. Commissioned a Second Lieutenant, he was appointed a platoon leader and served in Korea and Japan from 1952-1954.

A memorial service will be held for Bud and Polly at 10 a.m. (Mountain Time), Friday, Oct. 15, 2021 at Central United Methodist Church, 201 University Blvd. NE, in Albuquerque.

Two years later, at the age of 36, Davis was named President of Idaho State University in Pocatello, where he served 10 years. Taking leave from his academic post in 1972, he ran for the US Senate and won the Democratic nomination. He lost in a close general election to Republican James McClure. Bud left Idaho State University to be president at UNM in 1975, and subsequently, Chancellor of the Oregon State System of Higher Education from 1982-1988. In both these roles, he achieved significant increases in student enrollment and state support.

In 1989, he was appointed Chancellor of Louisiana State University where he served until 1997. During this time, LSU developed a unique partnership with crosstown Southern University and achieved an agreement that led to the end of a more than 30-year court ordered consent decree. Overall, LSU made major strides in increasing inclusivity and diversity during his tenure as chancellor. Upon his resignation, Davis served on the faculty in the higher education program until his retirement from LSU in 1999. Bud's 35 years of service as a leader, of a state university or state system at four different institutions, is unique in the history of American higher education.

Following retirement, Davis and his wife Polly returned to Albuquerque. He continued to serve his profession as a member of the Board of Regents for Western New Mexico University until 2008.

He also published Miracle on the Mesa: A History of the University of New Mexico. Davis had a wonderful sense of humor and often told and laughed at his own experiences with deep humility. His humor, his commitment to service to others, and his joy and adventures as a father are represented beautifully in his collection of shorts stories published in his book Nobody Calls Me Doctor.

He enjoyed a life-time hobby of creating and painting historically accurate (uniforms and equipment) miniature lead toy soldiers. Over 50 years, he produced thousands of pieces he willingly shared with others. Today, these soldiers are held in collections at the LSU Rural Life Museum in Baton Rouge, Louisiana, the Republic of West Florida Museum in Jackson, Louisiana, the Durango and Silverton Narrow Gauge Railroad Museum in Durango, Colorado, and the Shiloh Tours and Museum in Shiloh, Tenn.

The Davis’ leave behind a legacy of compassion, community involvement, and service to others, as a couple who dedicated themselves to educational institutions serving the needs of students in seven states over 60 years.