Former University of New Mexico Regent and retired Air Force Colonel Richard Toliver, was recently inducted into the Arizona Veterans Hall of Fame. He held his position as a Regent for six years and lived in New Mexico for 15. He said that this latest recognition acknowledges many people in New Mexico who have had a positive impact on his life.

The Unified Arizona Veterans, Inc., in Phoenix, Ariz. recognizes and honors Arizona veterans who have honorably served their country through military service and who serve and inspire their fellow American citizens with civic deeds and accomplishments outside of their military service.

Col. Toliver graduated from Tuskegee University with a degree in Mechanical Engineering and entered the Air Force in February 1963. He earned his pilot wings in June 1965. His military decorations include the Legion of Merit, Distinguished Flying Cross, Meritorious Service Medal with two Oak Leaf Clusters, and the Air Medal with 27 Oak Leaf Clusters. Col. Toliver retired from the United States Air Force March 1, 1989 after 26 years of distinguished service. 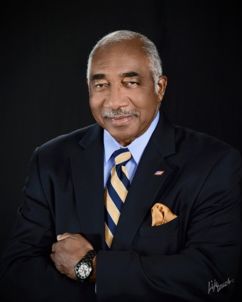 In 1995, Toliver was appointed by Governor Gary Johnson to the New Mexico Public Safety Advisory Commission. Then, in 1997, Governor Johnson appointed Col. Toliver to the Board of Regents at UNM. The state senate confirmed him for the term of 1997-2003. He was the first African American and retired military officer in the 113-year history of the university to serve on the seven-member board. At the time, UNM was a Carnegie Research I University with 30,000 students at five campuses.

In 1999, the 377 Air Base Wing Commander selected Col. Toliver to be the 1999-2000 Honorary Commander for the 58th Special Operations Wing, Operations Group, Kirtland AFB. This program unites the base and community leaders to foster greater understanding of Kirtland’s mission and the mutual benefits derived for Albuquerque and the state of New Mexico. In 2002, the colonel was selected for membership on the Board of Directors of the Kirtland Partnership Committee (KPC). The KPC is a non-profit 501(C) 3 corporation whose mission is to preserve and grow Kirtland Air Force Base in Albuquerque, New Mexico. Then, Kirtland AFB had an economic impact of over $4 billion annually.

Col. Toliver has been married fifty-four years to the former Peggy A. Hairston of Baltimore, Maryland. They have eight adult children, five of which are adopted or foster, thirteen grandchildren, and two great grandchildren. The Tolivers reside in Goodyear, AZ and are members of Apollo Baptist Church in Glendale where both teach Sunday school, and Col. Toliver serves as Chairman of the Deacon Board. He is a life member of Tuskegee Airmen, Inc., the Air Force Association, and the Red River Valley Fighter Pilots Association. He is also a member of Pinnacle Forum, a national organization that seeks to be a catalyst for change across the seven Cultural Mountains of Religion, Family, Education, Business, Arts and Entertainment, Media and Government.