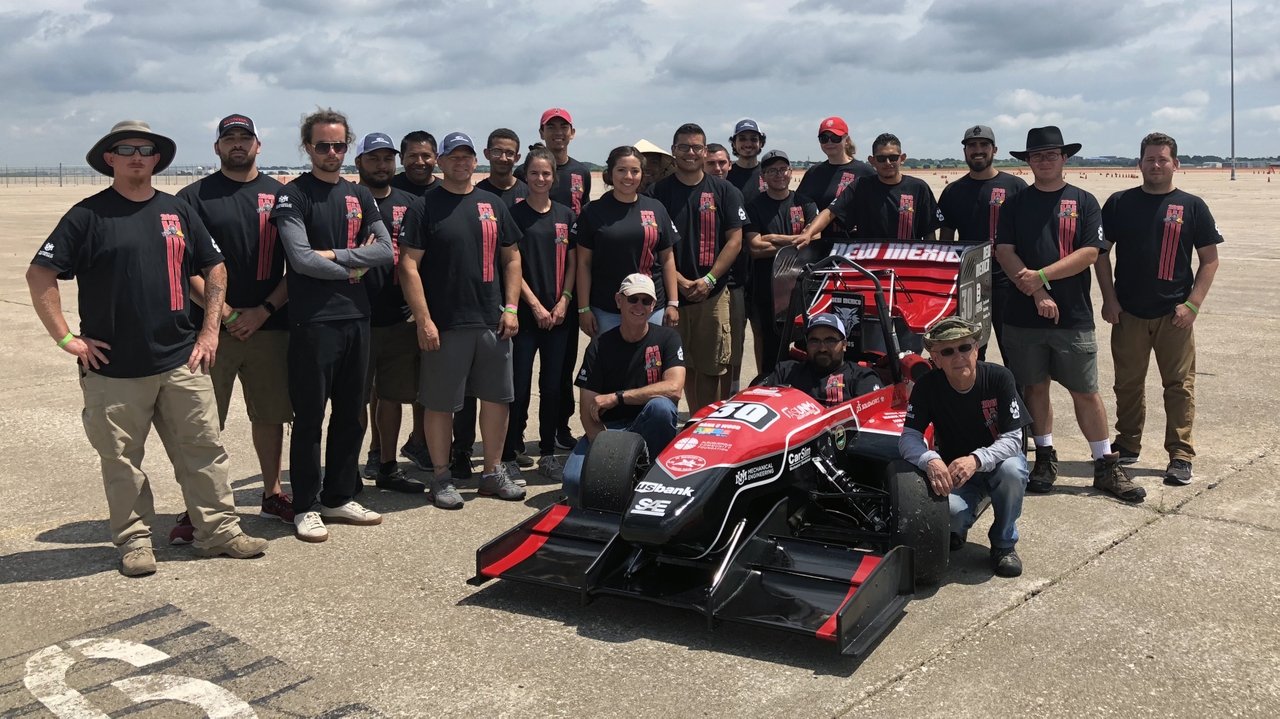 For most spectators, everything about racing seems big—large and powerful motors, oversized tires, loud sounds, fast speeds. But as The University of New Mexico’s Formula Society of Automotive Engineers team has recently learned, racing actually relies upon the tiny details, fractions of an inch in a miscalculation or a split second in speed can mean huge impacts on results.

The team emerged from their annual international competition June 20-23 in Lincoln, Neb., with some good results and some lessons for the future. Overall, the team finished 28 out of 80. They also tied for eighth place in design and finished seventh place in skid pad.

"The team has made major improvements in the reliability of their engine in recent years," said John Russell, professor of mechanical engineering and director of the program.

But a structural failure in the endurance event cost them a potential 350 points out of 1,000.

“Until then, the car was running faster than anyone else on the course,” Russell said.

Russell also noted that many highly-ranked engineering programs, such as University of Illinois at Urbana-Champaign, Iowa State, University of California at Los Angeles and many others didn’t place as highly as UNM. Also, judges at Lincoln praised the design of UNM’s car, saying it had the potential to be a top-finisher.

In the end, the students walked away with valuable lessons. For team leader and FSAE veteran Jonathon Abeyta, the Lincoln competition was another real-life reminder of the importance of checking and double-checking details and design.

Marissa Martinez, who will be on the 2019 chassis team and working on the electric car, said her first time at Lincoln was a powerful experience that underscored the importance of discipline and precision in engineering.

“I immediately learned that time management is crucial to succeeding at competition. We had an hourly breakdown of where we needed to be, which enabled us to adequately compete in every event,” she said.

The goals for the 2019 team are to complete the car by early March so the team will have more testing and driving time, as well as to continue to work to lower the weight of the car.

Russell points out that teams at many universities are run like a club, where FSAE is treated as an extracurricular but one where the team participates all four years, not just for a couple of seasons like UNM, where FSAE is administered through three semesters of coursework. For a university like UNM, where many students are also working and taking care of families, that model would not work, and he believes that as the team improves and becomes more stable, the coursework model will make it more sustainable than a club would be.

Russell said it became even more apparent this year that the top teams are advancing in technology. UNM’s team has been building the car in a space that is growing increasingly cramped, but plans are under way to change that.

Earlier this year, the program received a $1.5 million gift from the estate of School of Engineering alumnus Dana C. Wood. The money will go toward a 7,000-square-foot space on the north end of the basement of the Farris Engineering Center that will be dedicated to the FSAE program. It is anticipated that the new space will be completed by Aug. 2019.

More changes for the program include building a second car for competition. Twenty of the 100 cars in competition were electric this year. UNM’s team has just begun work on an electric car, but they hope within a couple of years, the car will be ready to compete. Russell said donors have expressed serious interest in funding the program, and Jane Lehr, professor of electrical engineering, has signed on to direct students in the building of the car.

Russell, who has directed the FSAE program for 20 years, has seen the evolution of the program, both disappointments and successes—the team has been ranked as high as fifth best out of 125 in the United States and 18th best out of 500 in the world. Russell is proud of the accomplishments of the team and always is quick to point out that the goal of this competition is not to win, but to learn. And he always emphasizes that UNM’s small team more than holds its own against Indy Car-quality international cars that are part of extremely well-financed programs.

Part of that learning experience is not just for the students to learn how to overcome engineering obstacles and challenges, but for them to connect with industry. Russell said one of the brightest spots of the competition is the fact that students were being recruited on the spot.

“We had Space X, General Motors, Honda and Blue Origin, plus smaller companies recruiting our students with job offers,” he said. “The SpaceX recruiter told us that 60 percent of their new hires are students who have participated in FSAE, so that speaks very highly of the skills students learn in this program. They know what these students can do: design, build, test and compete,” he said.

Click here to donate to the FSAE electric car.