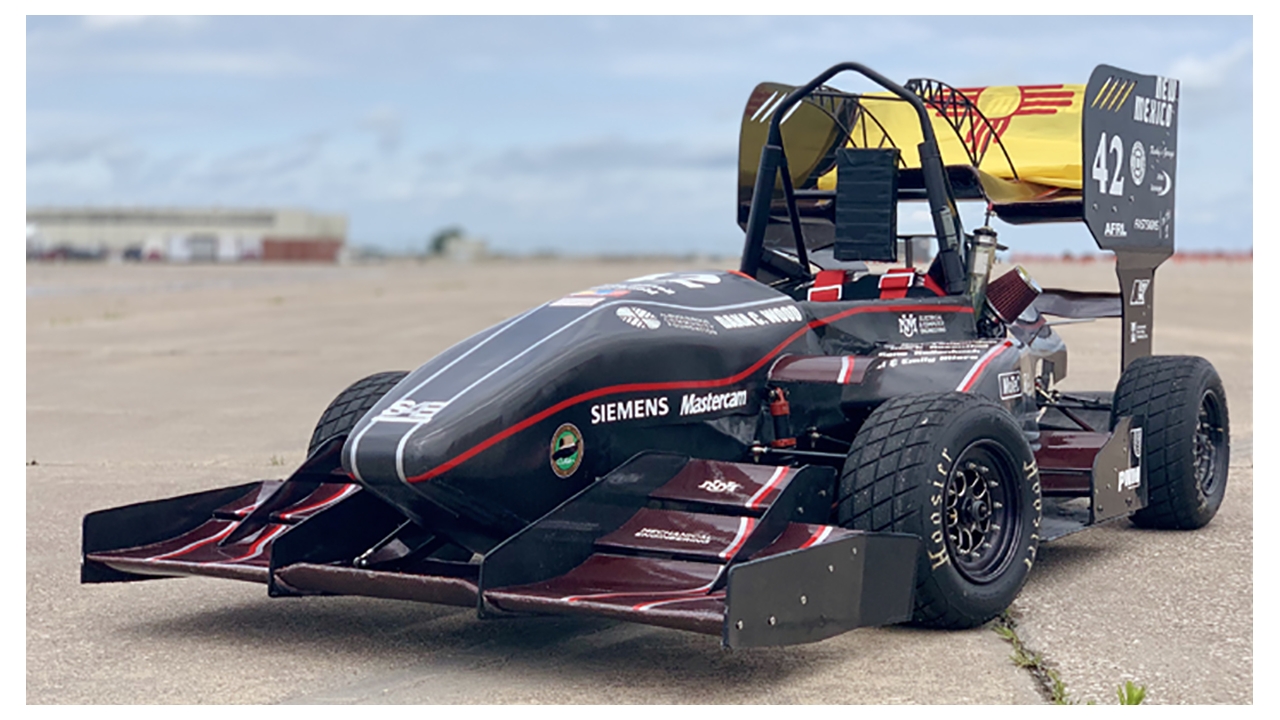 For two decades, The University of New Mexico’s Formula Society of Automotive Engineers team has been designing, building and racing a Formula-style car for competition in an international contest. Students spend an intense year working on the machine, applying their classroom knowledge to the real world. 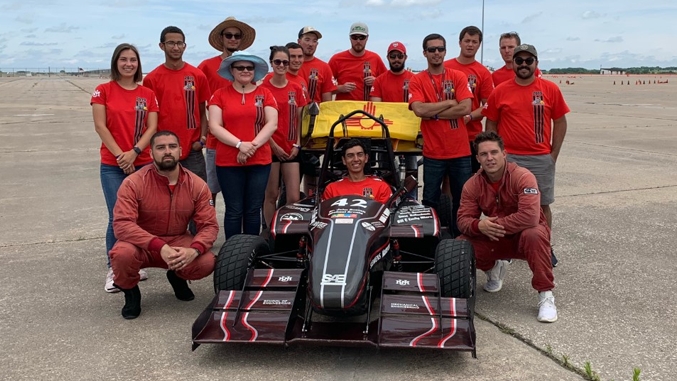 The team results over the years have varied, with the team placing as high as No. 5 in the U.S. and 18th in the world. Although winning is important, director and mechanical engineering professor John Russell says it’s never been just about the outcome, but about what students learn from this real-world engineering lab.

The 2019 team competed in Lincoln, Neb., in June, placing No. 24 out of 80 teams. Russell said the overall result — although not the program’s best result historically — was admirable, considering the caliber of teams and the difficulty of competition.

“It’s a very difficult competition, and the judging can be very harsh,” Russell said. “On top of that, it rained, complete with lightning and thunderstorms. That changed the way the car performed. We hadn’t practiced under those conditions.”

Even if the weather wasn’t one of them, there were some bright spots. The team finished the endurance race, which many teams do not finish, and not finishing that competition severely impacts the final score (endurance is 37% of the final score).

The team won first place for their technical drawings, which are evaluated on how accurately the drawings depict the design of the car.

UNM’s team also placed seventh in fuel economy and ninth in acceleration. This year was also the first time the car had an electric throttle, a feat that few cars at the Lincoln competition achieved. And the continuing quest to put the car on a diet was successful, with the car weighing 50 pounds less than last year at 455 pounds.

“That is a major step forward, and we would like to get it down even more,” Russell said.

Gabriel Brown, a senior in mechanical engineering and leader of the 2019 team, said that the experience of going to competition was intense.

“The consequences of decisions made over a year prior unfold in a matter of four short days,” he said. “My team and I worked long and hard. This competition is the ultimate showcase and the result of blood, sweat and tears. Finishing the endurance event was, without a doubt, a proud moment for the team. Emotional even. The fact that our car crossed the finish line is proof of hard work and success of the FSAE program.”

Brown said he learned a lot of lessons from being part of the program, including the importance of communication in a team environment. Also, while the team comes to competition with a great deal of knowledge, they quickly realize there is much more to learn.

“A person has to be humble enough to accept that they don’t know the solution to every problem while still being confident enough to confront problems armed with the knowledge they do have and the knowledge of those surrounding them,” he said.

Students agree that the experience of going to competition was a valuable one.

Angela Climent, an exchange student from Spain and a member of both the engines subteam and aerodynamics and composites subteam last year, said that the program taught her how to be a real engineer and gave her the confidence to make her own engineering decisions.

“You have a problem and a very short time to solve it. You need to apply everything you’ve learned in class in order to get your car running on time,” she said.

Climent, who is starting her master’s studies in astronautical engineering at Auburn University this fall, said the FSAE program will help her in her graduate education and beyond.

“Schools really appreciate having FSAE on the resume of their applicants because they know that the students that have been involved in a Formula student team are hard workers and know how to work as a team,” Climent said. “FSAE literally gave me a scholarship to study for my master’s and gave me a TA position. “

When it’s time to look for a career, she said the FSAE competition is full of job opportunities.

“A lot of companies are interested in the students because they know they are hard workers and good engineers,” she said.

Although hindsight is 20/20, and the team can identify places that they could have improved, the program is looking straight toward the year 2020, when it is expected that the program will have a new home, in the basement of the remodeled Farris Engineering Center.

In 2018, a $1.5 million gift from the estate of Dana C. Wood, a School of Engineering alumnus, was made to benefit FSAE. From the gift, a 7,000-square-foot space in the basement of Farris Engineering Center will be dedicated to the program, along with some updated equipment. Although the space won’t be ready for use by the incoming 2020 team, construction is anticipated to begin in fall 2019, with completion in the next year, Russell said.   Even though the Lincoln competition is barely behind them, the 2020 team, which worked alongside the 2019 team, is already hard at work and feeling optimistic about next year’s contest.

Sam Casaus, a mechanical engineering student and project manager of the 2020 team, was one of the incoming team members who was able to go to the Lincoln competition. He said the last year working with the previous team has been a valuable learning experience.

“I got to see how decisions were made and I saw how important it is to manage time and to have proper project management,” Casaus said. “It’s like a big game of chess.”

The team agrees that they have a strongly-engineered and well-built car, so they are planning to build upon that past knowledge by streamlining the design and build process to stay on track with making sure that there is enough time to design, test and drive the 2020 vehicle. The goal for next year’s team is to place overall in the top 10.

“Our car is a capable machine and has the potential to be a top car,” said Sal Lambert, 2020 systems chief. “We just need to figure out our time management and put people where they need to be.”

Casaus said the team plans to finalize design this summer, then put the full team to work during the fall semester in the build and test stages. They don’t want to spend time making major changes at the last minute. He said he wants next year’s team to thoroughly understand how the car works and why it was built the way it was so they can explain their design rationale to judges with ease.

The 25 or so members of the FSAE team are mostly mechanical engineering and electrical and computer engineering majors, but the 2020 team would love to have students from other engineering disciplines and business. The business plan competition part of the Lincoln competition can be a challenge for engineers to manage, especially when they are more focused on keeping a car running.

The FSAE program is one of the senior design options for mechanical engineering students, but Lambert emphasizes that any student who has an interest in the program can join in.

“The door is always open,” he said.

In addition to the combustion engine car, the program is also building an all-electric car, which they hope to have a working prototype of next year.

The FSAE program relies heavily upon donations. Donations can be made to both the traditional Formula SAE car program or the electric car program.