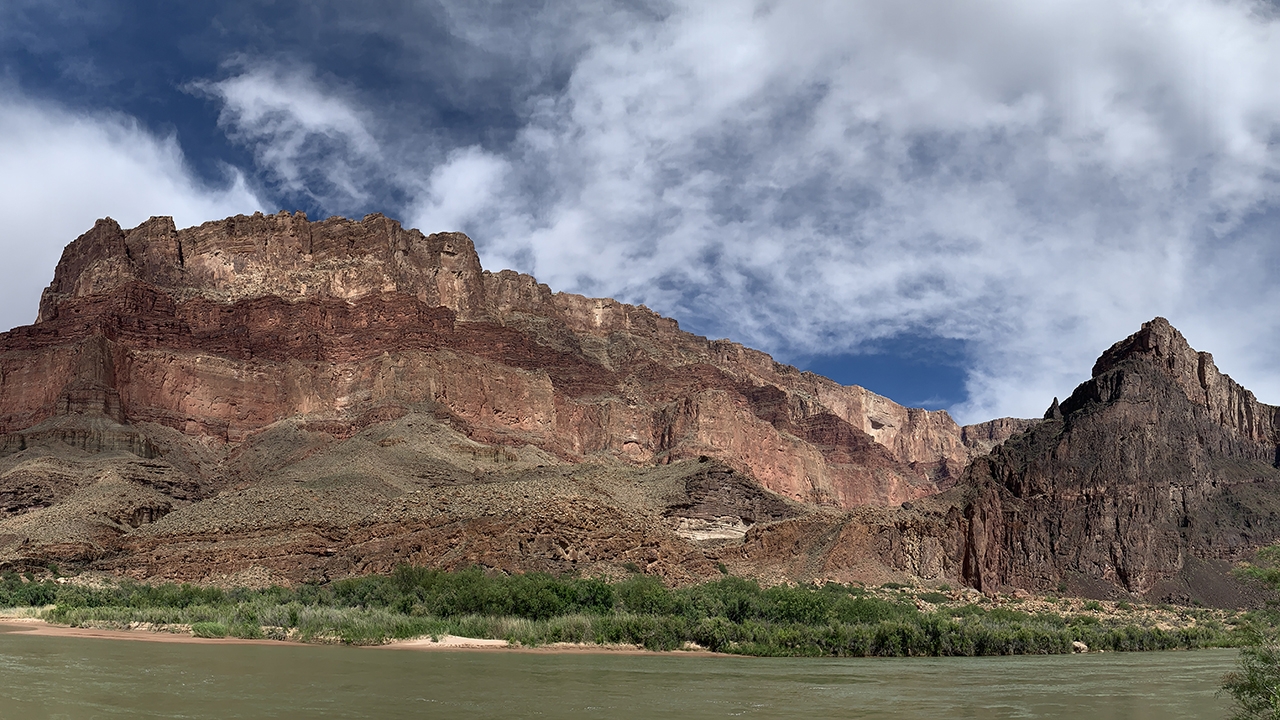 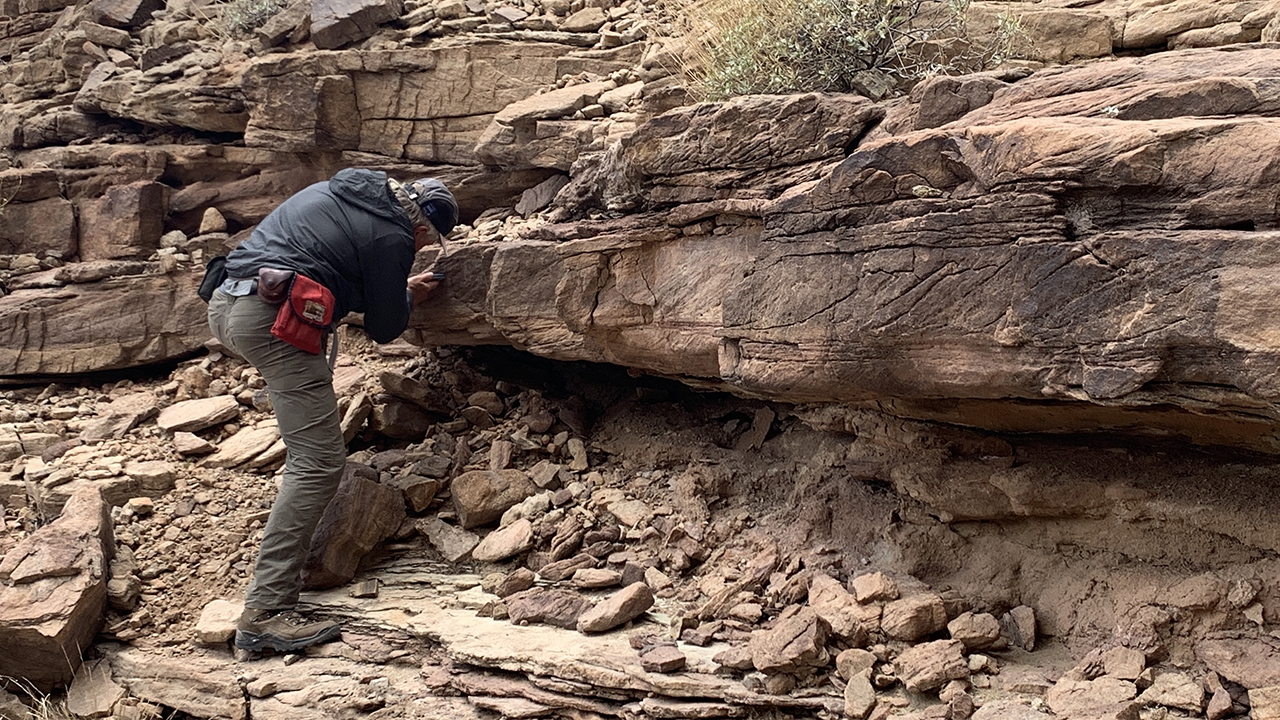 paleocurrents in sandstone bed of the Tapeats Sandstone. 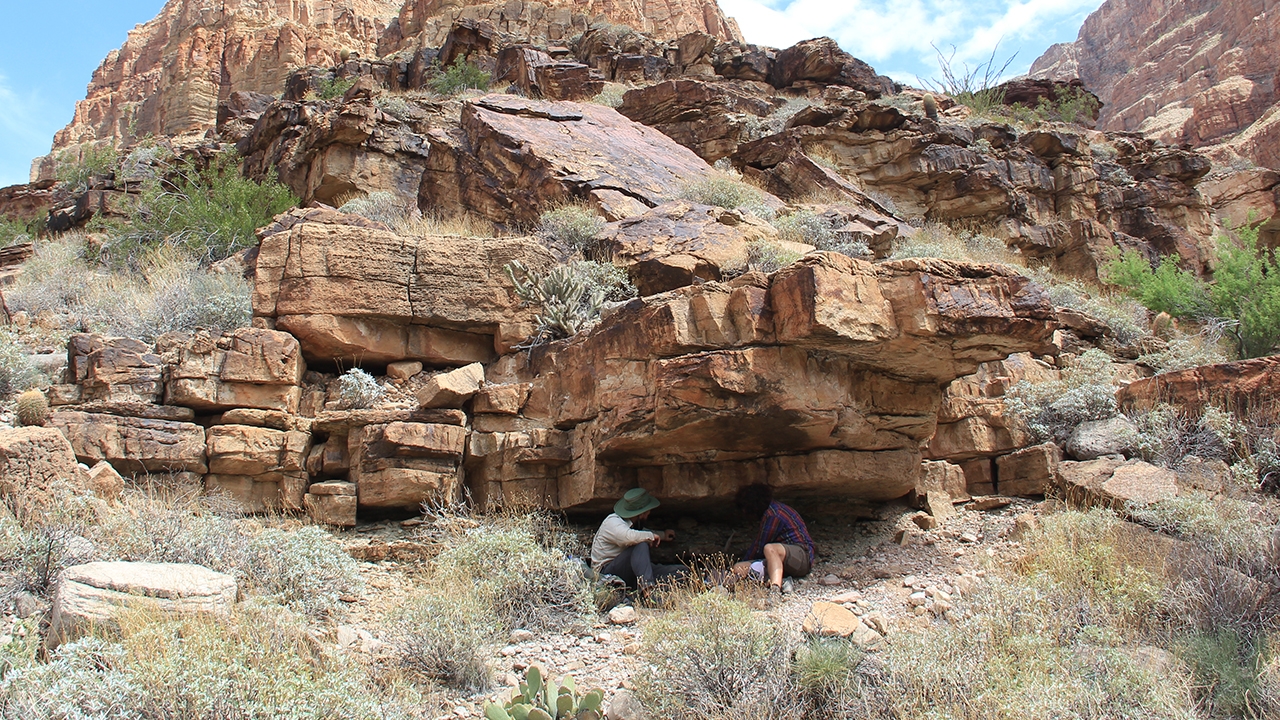 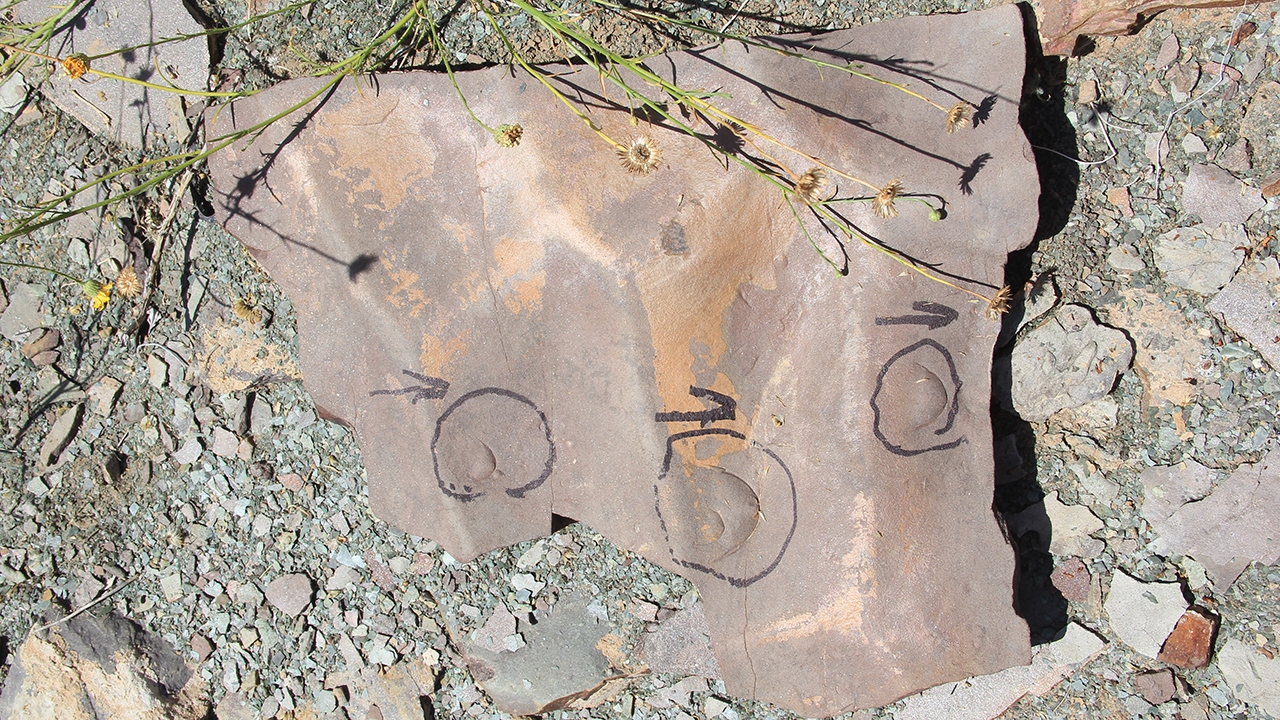 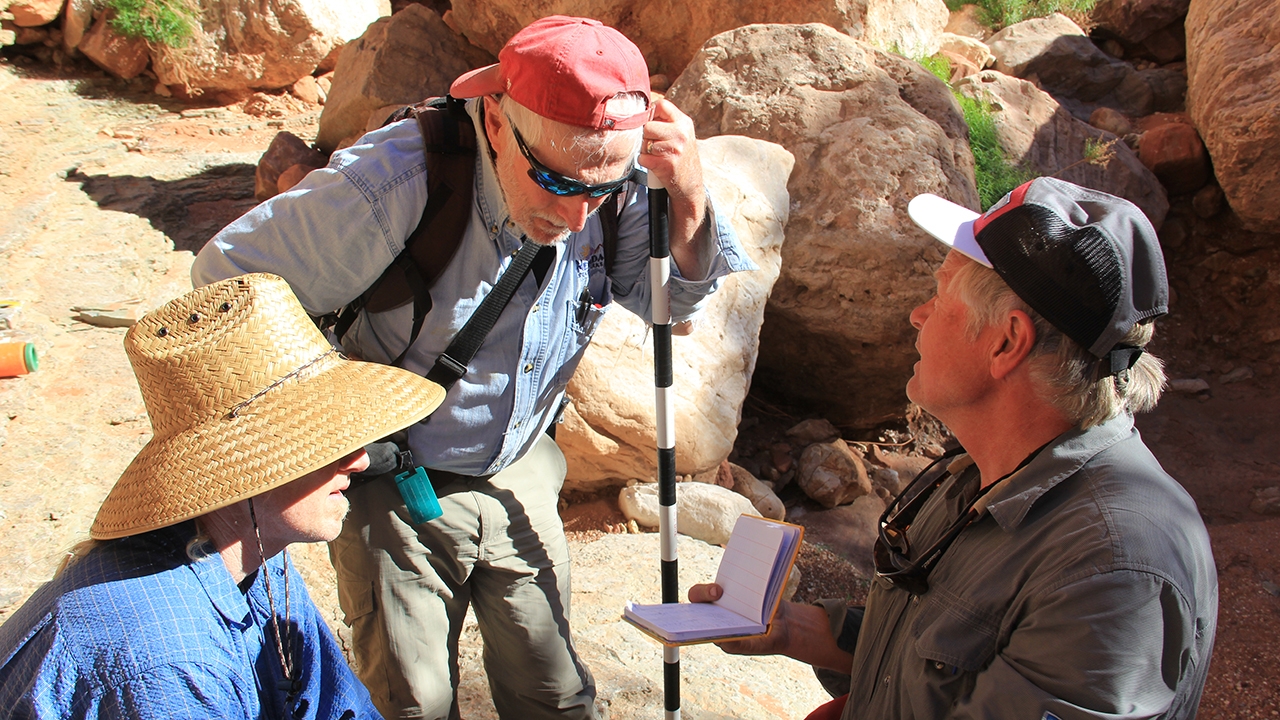 James Hagadorn (left), Steve Rowland (center) and Karl Karlstrom (right) confirming field notes after measuring a section of the Tonto Group. The banded rod is used to accurately describe and quantify sedimentary strata in a vertical framework centimeter by centimeter.

The history of the Earth and of life on Earth is written in sedimentary rock layers. To understand the history, you must understand the rocks. Sedimentary rock layers of 541- 485 million years old, from the Cambrian Period, provide a record of incredible mystery—what caused the fairly abrupt, in geologic terms, appearance on Earth of a great diversity of early animal forms and their preservation as fossils?

This question is tied to several other questions about the environments the animals lived in: how much oxygen was there in the atmosphere and oceans, how was carbon cycled between organisms and the oceans, and how were the continents arranged in terms of the plate tectonic assembly and break up of supercontinents? 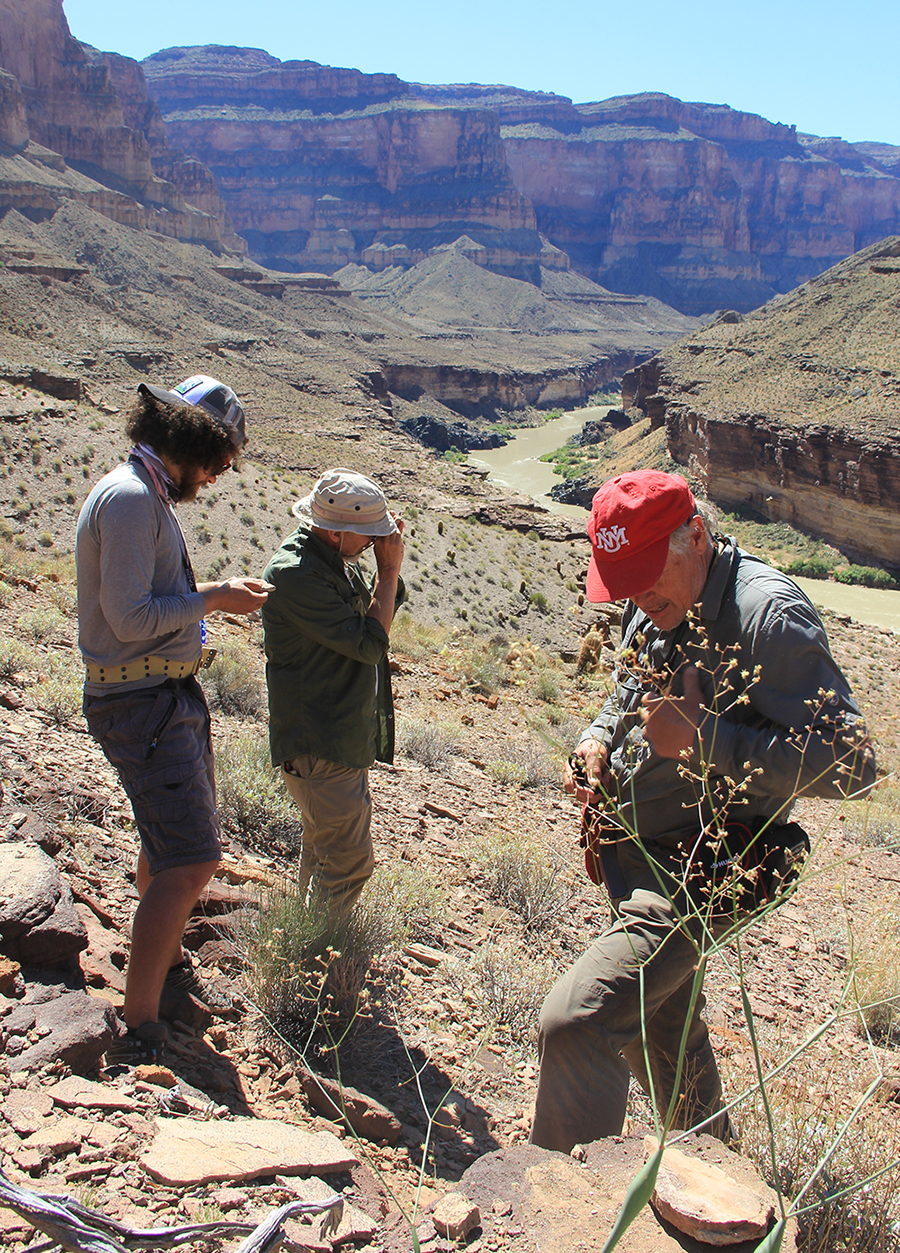 Researchers studied the traditional lower to middle Cambrian boundary across where two major groups of trilobites were thought to go extinct at the same time as a third group appeared. Fred Sundberg with white hat and hand lens identifies a trilobite find.

This team of scientists, including Professors Karl Karlstrom and Laura Crossey from UNM’s Department of Earth & Planetary Sciences, is undertaking a detailed study to find new occurrences of fossils such as trilobites, brachiopods, and microfossils, to measure meter-by-meter how carbon-isotope values changed through time, and to apply new technologies for precise dating of rock layers.

“The Earth is 4.56 billion years old, and life appeared on our planet very early, at least by 3.8 billion years ago,” said University of New Mexico Earth and Planetary Sciences Professor Karl Karlstrom. “Life during the first 85 percent of life's history on Earth (from 3.8 billion to 0.63 billion years ago) consisted of single celled organisms.”

James Hagadorn from the Denver Museum of Nature and Science is coordinating a team of paleontologist to study the fossils. “The timing, causes, and impacts of the debut of animal life, known as the Cambrian “Explosion,” are poorly understood”, said Hagadorn. “Yet fossil clues to understanding this event are entombed in Cambrian strata that formed as oceans flooded the world’s continents, and as coastal environments blanketed the landscape with vast swaths of sand, mud, and fossils.”

This explosion in the diversity of complex multicellular animal life happened very rapidly during the Cambrian Period between 539 and 485 million years ago and the reasons for this giant jump start towards modern animal diversity are still being debated, as well as why some of the early animals, including the trilobites, began to develop hard shells that allowed them to be preserved better in the rock record.

Boise State University Professor Mark Schmitz is the project lead and person responsible for the U-Pb dating. “The pace and tempo of the evolution of life on Earth, even after centuries of advances, remains a major detective story for geologists,” said Schmitz. “The Cambrian explosion was an extroardinary event and rocks from this time period are well exposed in Grand Canyon. These strata and their fossils contain the clues for why life developed so fast and so far towards what we know to be modern animal diversity. As in many detective stories, knowing the when and where provides essential clues for figuring out the how and why.”

Utah State University Professor Carol Dehler will coordinate the geochemical analyses of the rock strata. “The carbon encased in these amazingly well exposed strata will provide scientists with a “barcode’ of changes in the carbon cycle alongside the changes in biota.  These records, when calibrated by U-Pb dating, will provide a window into the causes, styles, and rates of evolutionary change in the Grand Canyon area and will also be compared to other records around the world. One of the best parts, though, is collecting the samples, bed by bed, and documenting the promising information that is recorded through these thousands of feet of strata.”

Major results of this study were published (May issue, 2020) in a pair of articles in the peer-reviewed journal “Geology.”

The Karlstrom paper, Redefining the Tonto Group of Grand Canyon and recalibrating the Cambrian time scale, now redefines the Tonto Group to include layers above and below that were previously poorly understood by scientists; the Sixtymile Formation is added to the bottom and the Frenchman Mountain Dolostone to the top based on new radiometric dating. 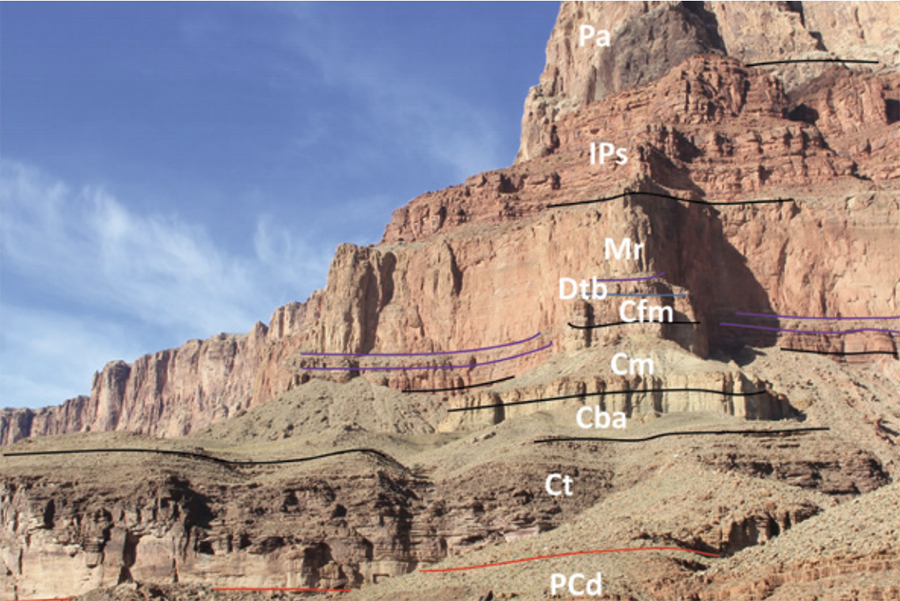 This change has global ramifications because the new age of 508 to 497 million years old for most of the Tonto Group is much younger than was previously thought. This indicates that seas flooded North America very quickly and that other continents experienced the same event. The Tonto Group dating has also recalibrated the international Cambrian timescale by adding a new location where the time of key extinctions and appearances of fossil groups is precisely and accurately dated.

One of the best-preserved records of these events is in the bottom of the Grand Canyon—in a package of sedimentary strata known as the Tonto Group. The Tonto Group is spectacularly exposed in 3 dimensions (4 counting the time dimension) through much of the 270-mile-length of Grand Canyon and its tributaries. The last time these layers and their fossils were studied in detail was about 75 years ago, by Grand Canyon geologist Edwin McKee.

The second paper, Asynchronous trilobite extinctions at the early to middle Cambrian transition, led by F.A. Sundberg from the Museum of Northern Arizona, also includes other team members as coauthors. This paper addresses the question of whether trilobite radiations and extinctions were globally synchronous, versus geographically restricted and diachronous.

They studied the traditional lower to middle Cambrian boundary across where two major groups of trilobites were thought to go extinct at the same time as a third group appeared. Instead, based on the new U-Pb dating these three trilobite groups, paradoxidids, olenellids and redlichiids, and their associated biotas overlapped for about 3 million years, indicating that trilobite transitions were progressive and occurred in different places at different times rather than being globally synchronous.

“It was once thought to be a global turnover, where extinctions of two trilobite groups were synchronous with appearance of a third group of trilobites at 509 million years ago,” explained Sundberg. “Instead, the new calibration of the Cambrian timescale shows that they coexisted in time (in different parts of the globe) from 509 to after 506 million years ago, a significant percentage of the time of early trilobite evolution during the Cambrian explosion.” 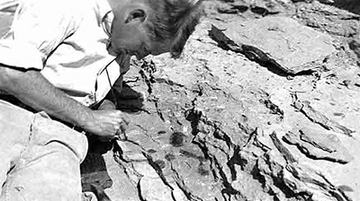 Edwin “Eddie” McKee, a geologist who became Chief Naturalist at Grand Canyon Natural Park, wrote many articles and books on Grand Canyon geology. Here he is studying trilobite fossils in the park in 1936.

Sedimentary rocks are hard to date, so even where fossil transitions are well-studied in the rock record around the globe, it has not been possible to assign an accurate numeric age in millions of years. The key to unlocking this problem was to find and date the youngest sand grains in the form of the mineral zircon, which is amenable to U-Pb geochronology.

“In Grand Canyon, the strata that were thought to span tens of millions of years are now known to have been deposited in just a few million years. This change has been made possible by precise U-Pb radioisotopic dating of detrital zircons,” added Schmitz. “It reveals surprisingly fast changes at a time when trilobite groups were appearing and going extinct very rapidly. Because of this new dating, Grand Canyon has, again, become a globally significant field laboratory for studying globally important debates.”

The NSF grant titled, “Collaborative Research: Constraining the tempo and dynamics of Cambrian Earth systems in western Laurentia,” will further investigate this important time in Earth history with a study that will characterize and date layers above and below key fossil layers throughout the succession in Grand Canyon and all across the western U.S. First steps involve measuring and characterizing, in teams, where the key fossil horizons exist in the cliffs of Grand Canyon. Samples are collected for later laboratory analysis, then sent to the different universities to determine the age, chemistry and paleontology of the layers.

“This promises to further refine the precise timing of unconformities and depositional episodes to test hypotheses about how marine flooding episodes relate to global biologic, tectonic, and ocean/atmosphere changes,” said Crossey.

The broader impacts of this research are far-reaching and include mentoring a suite of post- doctoral, graduate, and undergraduate scholars, recruiting and training Hispanic and Native American students, and outreach and distance learning to help this science inspire younger audiences, including 4th-12th graders in rural, first-generation, first-nation, inner-city and culturally diverse settings.

The research will also reach many of the six million annual visitors to Grand Canyon National Park through Park programs, the Trail of Time exhibit, media, and NSF-sponsored field forums on Grand Canyon geology.