The invitation was simple, come experience the culture of the Southwest—learn about the people, traditional food and see the landscape that produces tumbleweeds. Twelve German educators from across Deutschland accepted the invite and boarded a plane. Destination: The University of New Mexico.

The Global Education Office (GEO) in partnership with the College of Education and the German-American Institute sponsored the German visit.

“My ultimate goal was to tap into as many sources that I can to promote global understanding,” said German native and Program Specialist with GEO, Susi Knoblauch. “I want people across the globe to know New Mexico and the special university we are here at UNM. Hopefully this program recruits people to come study with us.” 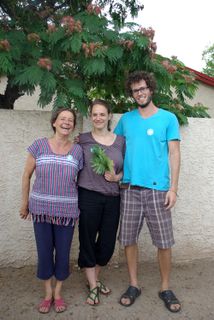 “This was my first time in the U.S.” said Ulrich Schuhknecht. “The program went beyond my expectation. I was interested in the Pueblo style architecture and stucco. I didn’t feel like a tourist staying with and learning from my host family.”

The itinerary was packed as the group set out on their first day of exploration. The Germans were introduced to Albuquerque, home to UNM. They walked the Rail Yards, strolled downtown, Old Town and visited the National Hispanic Cultural Center.

The next day they were introduced to UNM. After an eye-opening campus tour where one of the participants described the University as looking like a “resort—somewhere you would go on a holiday,” the group was given an overview of New Mexico’s history, culture and life.

“The College of Education was very pleased to welcome the visiting educators from Germany and be a part of what proved to be an enriching two weeks,” said Deborah Rifenbary, associate dean of Academic Affairs and Faculty Development. “It was a wonderful opportunity to share dialogue and learn from each other.”

The following day, the group was treated to what many of them thought was one of the highlights of their visit. As part of the Jemez Pueblo Feast Day, Pueblo resident Brianna Fragua, invited the Germans to celebrate with the spicy flavors and richness of local cuisine.

“It was crazy,” said Manuela Vogelsang. “There was the most incredible spread of New Mexican and Mexican food. Sopapillas were my favorite.” 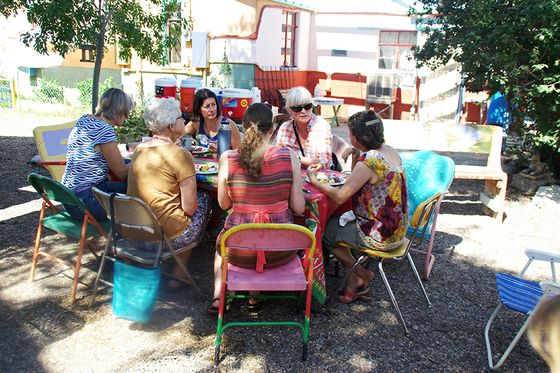 Some of the other events the Germans attended included lectures on Native American culture, language and literature in New Mexico and the Southwest with UNM Professor Christine Sims. Vice President for Student Affairs, Cheo Torres spoke to the class about Curanderismo—traditional Mexican healing and Professor Lois Rudnick spoke on immigrant issues in New Mexico.

The group also met with Paul Edmunds from UNM's Center for English Language and American Culture (CELAC) and they also learned about African American issues from Professor Tryphenia Peele-Eady.

“The group was interested in hearing about African Americans in the U.S., particularly the recent killings of black males and the massive social unrest that exists in states across our nation,” said Peele-Eady. “We discussed race in the context of African American education in the U.S. and examined the ways racism formed the historical fabric of this nation. Many of the participants used the discussion to examine similar social conditions in Germany and to critically reflect upon their own personal biases as educators.  In particular, the ways personal biases inform interactions with their students, both consciously and unconsciously, in classroom settings.”

“The participants came from all over Germany. Many of them teach English and will share with thousands of students their experience of New Mexico.”  — Susi Knoblauch

Visiting numerous sites around the state was also a priority of the group. They visited Taos, many of the Native American reservations and local claims to fame like the Santa Fe Opera, Los Poblanos Farms and The Sandia Peak Tramway—the longest aerial tram in the U.S.

“It’s always fascinating to see these sites, especially the big roads” said Ulrich Schuhknecht. “Instead of impressions I have first-hand experiences of New Mexico. It has brought everything to life.”

German undergraduate exchange student and GEO support staffer Alexander Marx echoed, “We didn’t just do the touristy things. We saw the culture and also learned the history from the people who are involved in it. It was always a good mix of learning and experiencing things.” 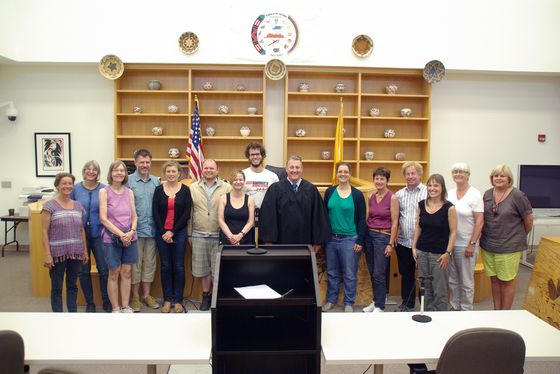 Before the trip came to an end, the group was invited to learn about juvenile justice by witnessing a few local cases in Judge William Parnall’s courtroom. The group also had the chance to observe Judge Randolph Marshall Collin’s courtroom in the tribal court of Acoma and compared the different justice systems.

“I was deeply impressed how they manage things in the court system,” said Nina Kerscher. “It is very different in Germany. The outcomes for these children was intense.”

With a greater understanding of the people here in New Mexico, our culture and landscape, the visiting educators felt like they now have the ability to better share enchanting stories of the Southwest and the role UNM plays in educating its people.

“I teach tenth grade students,” said Sabine Linkenheil. “After we read about this culture, I can now share personal stories—firsthand experiences with them.”

As they said their goodbyes, many of the Germans could not thank the UNM program sponsors enough. They didn’t see many tumbleweeds, but cherished the experience, including eating green chili, as one they will never forget.