Beginning in 2017, through a generous gift from the Frederick Hammersley Foundation, The University of New Mexico's Department of Art launched a program that invites prominent contemporary painters from around the world to live and work in Albuquerque. The mission of the visiting artist program is to honor the legacy of Frederick Hammersley and expand awareness of his life and work through the establishment of links to some of the most visible painters working today. 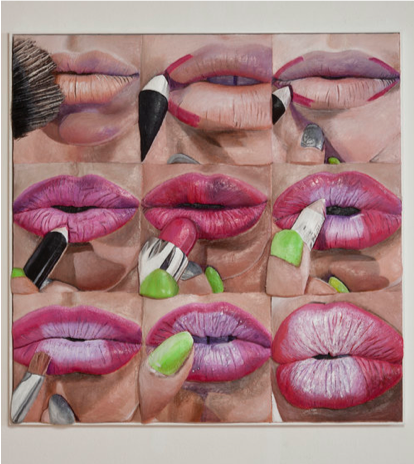 One such painter, and UNM’s 2018 Frederick Hammersley Visiting Artist, Gina Beavers, creates paintings and installations from photos culled from the Internet and social media and rendered in high Acrylic relief. Series include paintings based on the creative realms of body painting, social media user's photos of their meals, make-up tutorials, memes, and body builder selfies.

Beavers holds a BA in Studio Art and Anthropology from the University of Virginia (1996), an MFA in Painting and Drawing from the School of the Art Institute of Chicago (2000) and an MS in Education from Brooklyn College (2005). Beavers has exhibited solo projects at Carl Kostyal (London), GNYP (Berlin), Frieze (New York 2016), Michael Benevento (Los Angeles), Clifton Benevento (New York), Retrospective (Hudson, NY), Fourteen30 (Portland, Or), James Fuentes (New York), Nudashank (Baltimore, Md.), and Material Art Fair (Mexico City). Her work has been reviewed in the New York Times, Artforum, Frieze, the New Yorker and Modern Painters, among others.

Free and open to the public, in conjunction with the Albuquerque Museum’s “Third Thursday” events

For more information, contact Scott Anderson, assistant professor, Painting and Drawing in the UNM Department of Art, via email Sander73@unm.edu.