"I am honored to serve on the Board of Regents at UNM," said Adcock. "I look forward to working with the current board to maintain UNM’s status as a preeminent research institution. This University has become a part of my identity, and I want to ensure that future Lobos have the same, great experience that I have had." 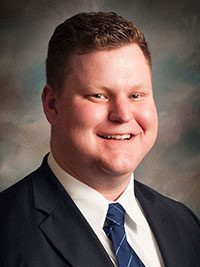 Adcock, a native of Garland, Texas, is a second-year law student at the UNM School of Law. Prior to law school, he completed his undergraduate degree in biology in just three years. An exceptional student, Adcock was a 2016 CoSIDA First Team Academic All-American, a three-time Mountain West All-Academic selection and a two-time Lobo Scholar-Athlete.

Last June, Adcock was recognized by nfl.com as the fifth-smartest player in college football. He was also a 2016 finalist for the Wuerffel Trophy, and a 2015 semifinalist, and earned a 2014-15 Director’s Chair for graduating with a perfect 4.0 grade point average.

Adcock was also member of the UNM Football team before his career was cut short due to injury. Adcock started 22 games on the offensive line, a number that would have been higher if not for the injuries. Last fall, he missed the season-opener against South Dakota State, but returned and started the next four games. He suffered his second concussion in less than two months in the Boise State game and announced his retirement 10 days later.

Adcock's community service has been recognized as well. He was named a candidate for the 2015 and 2016 Allstate AFCA GoodWorks team for his community service contributions, academics and athletics. He has spent time in the offseason building schools and working at make-shift hospitals in Africa, a project with his family. He also actively participates in a spring after-school exercise program with a local elementary school.

Additional community service activities include helping to start Mission Hospital in Ateiku, Ghana. He went on a mission trip to New Orleans to help Hurricane Katrina victims and also volunteers to help with the Special Olympics.

"This nomination is the culmination of the hard work of many individuals who deserve recognition," Adcock said. "First, I would like to thank Governor Martinez for nominating me to this position. Next, the faculty, staff, and coaches at UNM have my undying gratitude for their constant support over the past five years.

"Lastly, I would like to thank my family for always encouraging me during my time at UNM. I would not be where I am today without the help of these individuals. The future of UNM is bright, and I am excited to be a part of it."