The University of New Mexico has always had a strong commitment to honor veterans and their family members attending the University. This year, a record number of UNM vets turned out to celebrate their upcoming graduation at a ceremony presented by UNM’s Veterans Resource Center (VRC).

“We want to celebrate the fact that they’ve accomplished something major in their lives,” said Stephen Weinkauf, program coordinator at the VRC. “And most of our veterans accomplished it using a GI Bill, meaning there was some sort of sacrificed involved. So, we want to celebrate that and draw special attention to them not only getting their degree but their veteran status as well.”

This weekend UNM will hand out more than 150 diplomas to graduating veterans. In all, the University has more than 800 student vets enrolled. Last week, 37 soon-to-be graduates signed up to participate in the ceremony—four times as many as the year before—with more than 140 people filling the Student Union Ballroom to take part in the celebration. 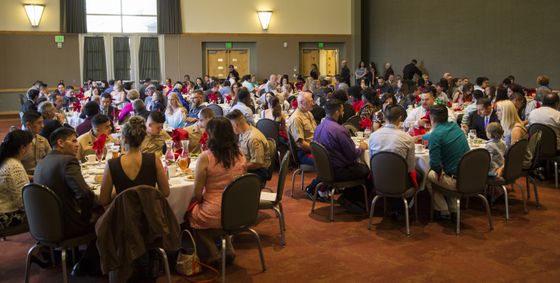 “It’s just a way to show our appreciation. We see them dozens of times a year in our office and you just get to know them, so we just kind of want to honor them,” said Kenny Ortega who does veteran outreach at the VRC and MC’d the event.

Weinkauf, who served six years with the New Mexico Army National Guard, said they don’t limit the ceremony to just graduating veterans, either. Dependents are also invited to participate as a way to show their appreciation to that family member who provided a GI Bill for them to get their education with.

“A lot of times they’re using their mom or dads, or husband or wife’s GI Bill. So, this ceremony allows them to invite that family member who gave them their GI Bill to go to school and celebrate with them,” said Weinkauf. “It’s just a good way to show that we support not only veterans but military families as well.”

The Rio Grande High School Marine Corps Junior ROTC kicked off the night with their presentation of the colors and members from the local non-profit, Full Battle Rattle, played the National Anthem. Graduating vets and their families enjoyed dinner and dessert and heard from guest speaker, Deven Schei from the Wounded Warrior Project.

Schei joined the military after his brother was seriously injured in Iraq. As part of the 101st Airborne Air Assault Division, Schei also sustained major injuries that lead to more than 17 surgeries. Today, Schei travels around the country to speak on behalf of the Wounded Warrior Project. He has dedicated his life to helping other wounded veterans find their purpose beyond the battlefield.

Ortega said a former UNM student and VRC employee now works at the Wounded Warrior Project and was able to connect the organization with Schei, who lives in the Albuquerque area. In the past, Weinkauf said they’d also had high ranking officers speak at the ceremony, but this year decided to find someone more relatable to the current veteran population at UNM. 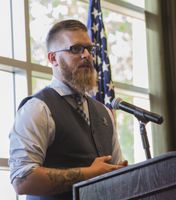 “We thought it was a little refreshing to have a younger, more modern veteran,” he said. “We have a very wide demographic here at UNM, but a lot of our veterans served post 9/11, so it was nice to get a speaker that was more relatable to our veterans.”

Each graduate in attendance was also recognized by name during the event. The graduates received a certificate of completion, a red, white, and blue honor chord and a challenge coin to also remember their time at UNM.

Weinkauf said several VRC employees went above and beyond in organizing this year’s celebration. Shireen Wanoskia Cline, Darren Brown and Kenny Ortega are all graduating from the University this coming weekend and have been a big part of the success the VRC has had in recent years, Weinkauf said.

The event’s organizers say they hope the ceremony continues to grow so that more veterans can celebrate their accomplishments at UNM.