UNM Newsroom / News / Grotbeck soars to bring success to others

Grotbeck soars to bring success to others

We all want to be successful. That’s one of the reasons thousands of students flood classrooms at The University of New Mexico each year. They do this to lay the foundation of experience, knowledge and expertise in order to improve their odds of living a successful, happy life. According to Chris Grotbeck, facilities engineer with the Physical Plant Department (PPD), personal success is only the first step in living a fulfilling life.

Grotbeck says that once someone has reached a comfortable level of personal accomplishment, their successes should be shared with the social spheres around them, the first sphere being one’s family. Outside of that sphere is one’s community which includes co-workers and friends. The final sphere would be the general public. 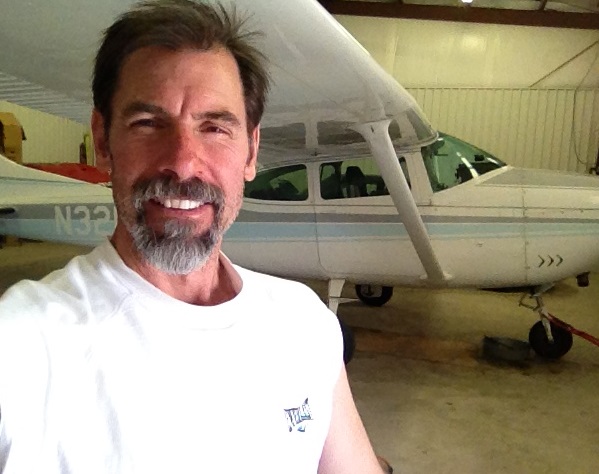 “My philosophical measure of success is based on three things: health, wealth and wisdom,” he explained. “When you help others to be healthy, wealthy and wise, you’ve multiplied your successes in life.”

Grotbeck has been entrenched in community service for several years, piloting his 1964 Cessna 182 airplane, and donating the fuel, maintenance and time required to voluntarily transport medical patients in need. Angel Flight is one of the public-benefit flying organizations Grotbeck volunteers for which helps transport people who might otherwise not be able to travel for medical treatment. According to Angel Flight, the South Central region (AFSC) has flown nearly 35,000 missions, and volunteer pilots have donated over $35 million through the “generous contributions of their flight costs” over the last 20 years. There are approximately 50 pilots in New Mexico who belong to AFSC and the Angel Flight West (AFW) regions who collectively fly an average of approximately100 missions per year.

“I’ve been flying for AFSC and AFW for the last three years, and have flown about 15 non-emergency medical missions. Flying is my passion and my hobby. Why not do something I love while helping others be successful at the same time,” Grotbeck explains. 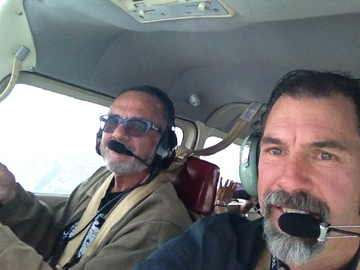 (l. to r.) Adrian Duran, his wife, Victoria (not pictured), and Christopher Grotbeck on an Angel Flight from Santa Fe to Denver.

Flying patients to various destinations across the southwest takes time, money, organization and generous pilots. Grotbeck describes a typical weekend where he transports patients for treatment in his four-seat aircraft:
This weekend, I will get up early on Saturday morning (0430) and drive to my airplane in Edgewood, then fly to Los Alamos and pick up three passengers – two kids who are patients in need of treatment in California, and their mother. Then, I will fly to Show Low, Arizona, where I’ll meet the pilot of the second leg of the flight and transfer the passengers to that pilot’s care. From there, they’ll fly to Lake Havasu and transfer to a third pilot who will take them to Santa Monica for treatment. After the treatment, they will repeat the trip in reverse, sometimes with a completely different set of pilots.

The Cessna 182 flown by Grotbeck can travel six and a half hours (from Edgewood to Palm Springs, St. Louis or Houston, for example) without needing to refuel. The 80 gallon fuel tank costs approximately $400 to fill up, and the maintenance costs are roughly $50 for each hour of flight. It is a substantial expense, admits Grotbeck, but he says that he is at a stage in his life where he can afford to dedicate most of his income and time to this worthy cause.

“Some might say that I must be wealthy because I own an airplane. Well, that is one measure of wealth, but I view the airplane as a means to be successful for myself and for others,” said Grotbeck.

Grotbeck recommends that anyone who can share their success with those in need should do so. “Choose to do something that you are passionate about, but also choose something that helps others. This will give you a greater sense of accomplishment.”

Grotbeck also volunteers for Flights for Life, an organization that transports life-saving blood and organs to patients in need, and the Experimental Aircraft Association where children aged 8-17 can fly with a pilot and earn scholarships if they are interested in the field of aviation. He also volunteers for American Legion Riders, and the FBI Citizens Academy Alumni Association.

“We all go through different stages in our lives. Sometimes, we are in the stage of life where we need to help ourselves, and can’t help others. Sometimes we are at a place where we can’t even take care of ourselves. And other times, we find ourselves in a position where we can help others, and that’s the stage I’m at in my life right now. It’s very fulfilling.”