A Geological Society of America (GSA) trip down the Colorado River to commemorate the 150th anniversary of J.W. Powell’s first expedition – what have we learned in the past 150 years – is set to launch Saturday, Sept. 14.

The eight-day, 280-mile field geoscience conference by raft through the Grand Canyon, aptly titled Age and Carving of Grand Canyon: Towards a Resolution of 150 Years of Debate, will be led by several notable scientists including University of New Mexico Professors Laura Crossey and Karl Karlstrom.

The age and evolution of the 1.6-km-deep, 270-mile-long Grand Canyon have been debated since Powell’s exploration of the Colorado River in 1869. This GSA Thompson Field Forum honors the 150th anniversary of Powell’s trip. It involves 28 researchers and young scientists who will discuss the evidence for the age and incision history of Grand Canyon in the context of recent advances and ongoing debates. 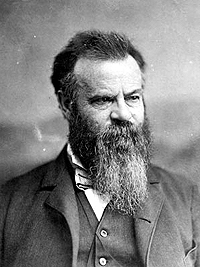 The GSA is commemorating the 150th anniversary of J.W. Powell’s first expedition in the Grand Canyon.

Now, as in Powell’s time, Grand Canyon research has global reverberations in terms of Cenozoic neotectonics, landscape evolution, and mantle-driven dynamic topography. The objective is to stimulate next steps on a next generation of research on the evolution and tectonic geomorphology of this iconic region, as well as similar studies globally. In particular, scientists will debate the evidence for and against ongoing mantle-driven uplift that may be shaping the dynamic and iconic landscapes of the region.

River trips allow several types of interactive sessions while examining the evidence including: discussions on the outcrop; “plenary” discussions at morning and evening seminars; and short talks and discussions on boats while floating past key areas. Each participant will be asked ahead of time to prepare and lead a seminar or outcrop discussion.

In addition to Crossey and Karlstrom, who will provide seminars on hydrochemistry and mantle-to-groundwater, and Grand Canyon geology and tectonics respectively, other scientists include Eugen Humphreys, University of Oregon (Colorado Plateau and geodynamics), David Schuster, Cal-Berkeley (thermochronology) and Kelin Whipple, Arizona State University (geomorphology). 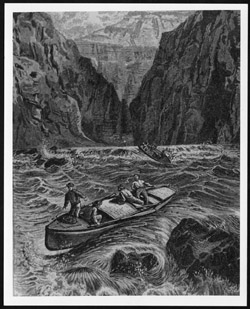 J.W. Powell and his group of explorers fight through rapids in the Colorado River.

Discussions will look at the Muddy Creek constraint and fault influences on canyon evolution as the group floats across the abrupt boundary between the Colorado Plateau and Basin and Range provinces at grand wash.

Following the rafting portion, synergistic “Land Session” meetings are scheduled for Sept. 22-25 at the Geological Society of America 2019 Annual Meeting & Exposition in Phoenix, Ariz. Thompson Field Forum participants will be there to serve as panelists for the GSA theme sessions.