Planned to correspond with lowrider cruise season, the exhibition opens May 29 and runs through Oct. 10. The entire ground floor of the museum will be devoted to the Santo Lowride experience. In this exhibition, santeros, santeras and famed lowrider artists cruise low ’n’ slow side-by-side to make apparent how these two art forms share subject matter and religious function, binding them across past and present peoples. Lowrider car hoods, trunks, wheel wells, upholstery, bikes and motorcycles, photographs and videography will be on exhibit alongside 19th and 20th-century santos and contemporary devotional art. 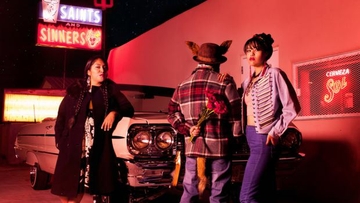 Curator Nicole Dial-Kay said award-winning Santa Fe based scholar Carmella Padilla and photographer Jack Parsons were one of the inspirations for the exhibition. They are also the co-authors of “Low n slow: Lowriding in New Mexico."

“Carmella Padilla is a wonderful scholar,” Dial-Kay said. “In her book ‘Low n slow’ she talks about how lowriders are a continuation of the unique Northern New Mexican tradition of devotional arts, not only in the religious imagery that’s painted on them, but in this idea that they are a vessel between the terrestrial world and the heavenly world.”

Dial-Kay worked with three advisers for the Santo Lowride exhibition: Carmella Padilla, Rob Vanderslice and Toby Morfin, who provided an insider view of the lowriding community of Northern New Mexico. Vanderslice emphasizes that the lowrider community of New Mexico is unique and is known for how it integrates religion into its artistic expression. This distinguishes it from the lowriding culture of California and other places.
More than 30 artists are included in the Santo Lowride exhibition. They come from Albuquerque, Santa Fe, Española, Taos and surrounding communities. Collectively, they represent the diverse expression of Northern New Mexico’s devotional artists, as well as the many specialty artists involved in the lowrider aesthetic tradition such as car builders, automotive painters, graffiti artists, pinstripers and upholsterers.
The Santo Lowride artists include:
Nicholas Herrera, a beloved contemporary santos carver from El Rito whose work has been shown at the Smithsonian American Art Museum, has always worked with cars, wood and welding. Herrera rescued a 1939 Chevy Coupe from an arroyo and painted the vehicle with religious imagery from bumper to bumper, transforming the car into his “Lowrider Shrine.” He says the car is mestizo, made of mixed parts, like himself.
“When the Spanish came in, they had their fancy horses and silver. They had their horses decorated, and that’s like our lowriders now,” Herrera said.
Rose B. Simpson, a mixed-media artist from Santa Clara Pueblo, created “Maria,” a stunning refurbished 1985 Chevrolet El Camino. Named for famed Pueblo potter Maria Martinez, the lowrider is painted with designs inspired by traditional Tewa black on black pottery. Simpson is preparing a replica of Maria’s hood for the Harwood exhibition.
Chimayó artists Arthur “Lowlow” Medina and the late Randy Martinez are known as the originators of the uniquely New Mexican lowrider tradition of painting large religious murals on cars. Their artistic masterpieces feature saints as well as pre-Columbian imagery and New Mexico churches and altars. An iconic car painted by Martinez will be shown as part of Santo Lowride. Medina will exhibit two pieces: a custom-made lowrider bike named “El Arado” (the plow) and a painted trunk depicting a lowrider parked at the Santuario de Chimayó. Medina designs and paints cars with the assistance of his wife Joan and their daughters. Their work style is emblematic of the importance of family within lowriding culture. He said it was very important to celebrate the history and culture of Northern New Mexico.

“The way I look at it is we have to make sure we keep on watering that seed, so it does not fade away,” Medina said. “It gives us the opportunity to show the talent that everybody has. We are blessed.”

Tags: The Harwood Museum of Art