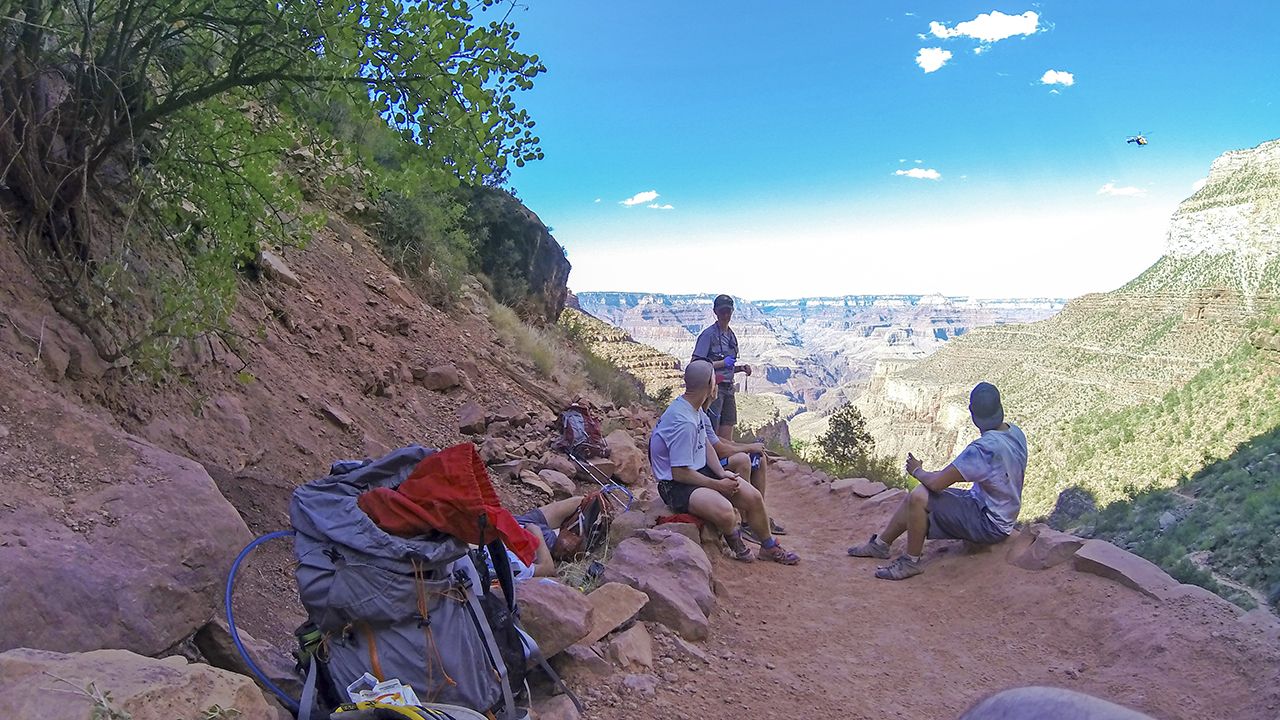 UNM Rim-to-Rim WATCH volunteers watch a helicopter in the Grand Canyon. The study explores the challenges that get hikers in trouble. 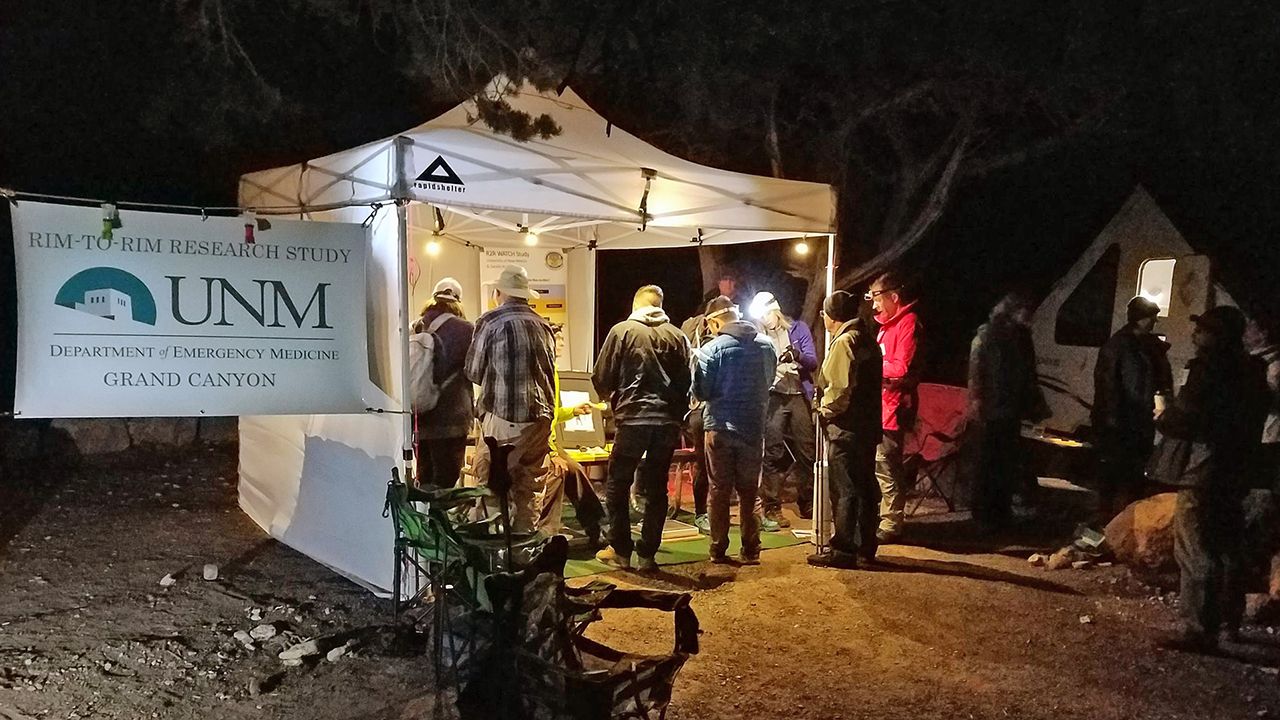 Rim-to-Rim Wearables at the Canyon for Health volunteers gather. 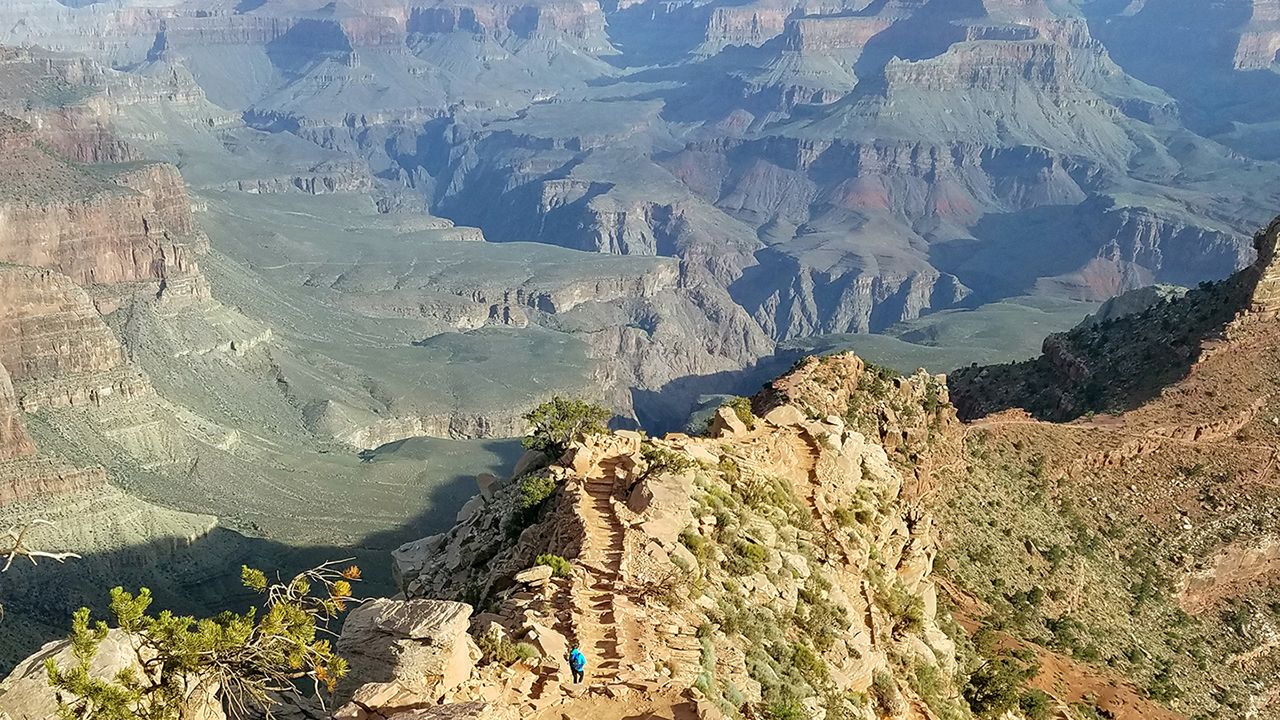 Hiker in the Grand Canyon

The UNM Rim-to-Rim WATCH study explores the challenges that get hikers in trouble. 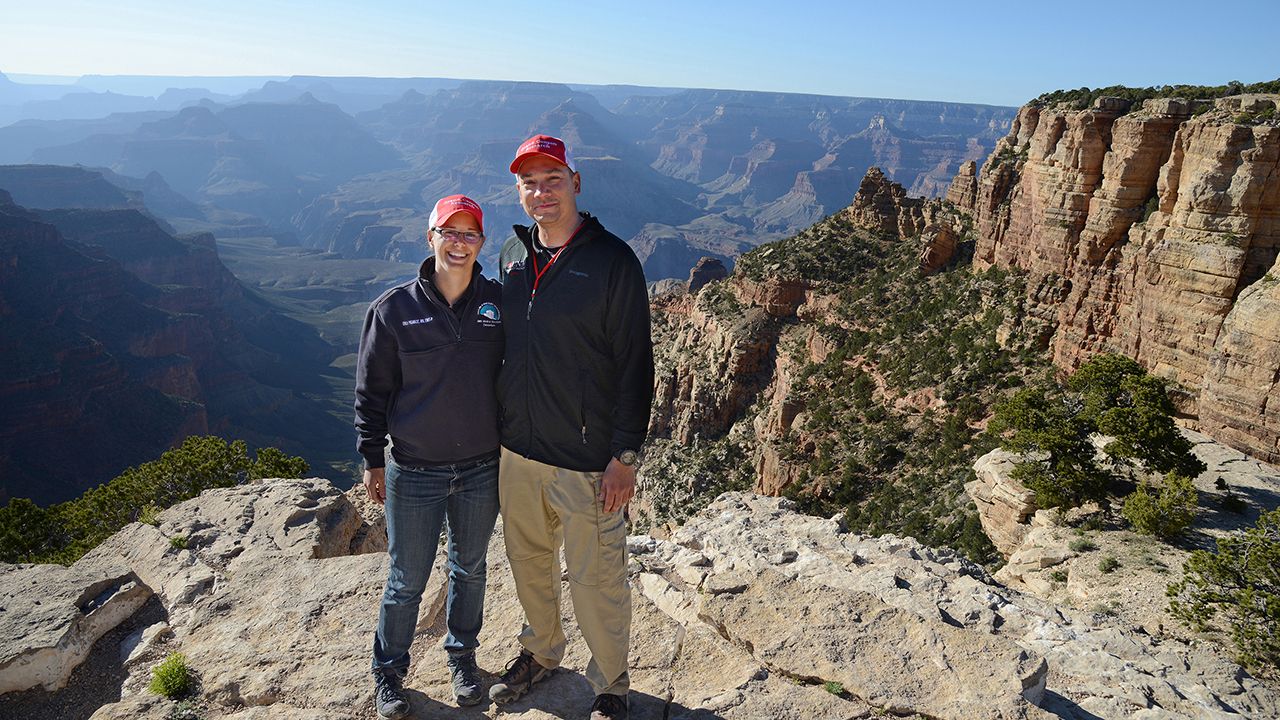 Emily Pearce and Jon Femling, MD, at the Grand Canyon.

On a weekend in May – and again in October – dozens of volunteers gather at trailheads on the north and south rims of the Grand Canyon to engage hikers embarking on the arduous rim-to-rim traverse.

It’s not for the faint of heart.

The trip covers 24 miles of rugged trail and 11,000 feet of elevation change, much of it in hot, inhospitable conditions. Thousands of people attempt it each year, but some get in trouble along the way, succumbing to exhaustion, dehydration and depleted electrolytes.

Jon Femling, MD, PhD, an assistant professor in the UNM Department of Emergency Medicine, helps lead the Rim-to-Rim Wearables at the Canyon for Health (WATCH) study, which explores the physical and cognitive challenges that get hikers in trouble.

“We have essentially three tiers of investigation,” Femling says. “Everyone gets a survey before their hike, at the bottom, and the finish. Those who want to participate further can use a fitness device and/or have a small blood sample collected.”

The surveys provide data on each hiker’s food and water intake, while the fitness devices measure movement, temperature, heart rate and elevation changes throughout the hike. The blood samples have been used to gather a complete metabolic panel, and there are plans to examine inflammatory and stress response markers as well, Femling says.

The study, a collaboration between UNM, Sandia National Laboratories and the National Park Service, has gathered data on nearly 2,000 people since the first weekend in May 2015, Femling says. It is being funded by a three-year grant from the Defense Threat Reduction Agency, a branch of the Department of Defense.

The Sandia team, led by cognitive scientist Glory Aviña, primarily focuses on studying human performance. “They’re interested in measuring cognitive deterioration under extreme conditions,” Femling says. “Do people lose the ability to think clearly?” That could affect a soldier’s performance in the field.

The Park Service, on the other hand, wants to reduce the number of people needing first aid or helicopter rescue, he says. Some hikers suffer seizures or fall unconscious from drinking too much water and not taking in enough salt while sweating continuously.

Emily Pearce knows the problem first hand. Hiking the canyon every day as a Park Service search-and-rescue ranger and paramedic, she found that many hikers attempting the route were unprepared. Their sheer numbers placed a burden on rescuers, who would spend hours coaxing them to finish the trek or, in extreme cases, summon a chopper to airlift them out.

“It was starting to take a toll, because we were up all night or on the trail all day with someone who had put themselves in this situation,” says Pearce, who now works in the Department of Emergency Medicine and is an incoming first-year medical student at UNM. The rangers respond to about 300 incidents a year, she says, with about 160 resulting in helicopter evacuations.

“We needed to gain a better understanding of this population of hikers,” she says. “How do we better understand what’s physiologically happening to these people?” Pearce applied for a study grant in 2014 and coordinated with the University of New Mexico Emergency Medical Services Consortium, which provides medical direction
at the canyon under a contract.

There, she met Femling, who was intrigued by the prospect of studying subjects under extreme conditions. People take about 12 hours to complete the hike on average, usually starting well before dawn, he says. Temperatures can range from a chilly 30 degrees at the top – where elevations range from 7,000 to 8,000 feet – to 115 degrees at the bottom. It’s a challenge for even the fittest hikers.

“People are going uphill during the hottest time of the day,” Femling says. “We have hard data that it’s going to take you twice as long to come up as it took you to go down.”

Such exertion can compromise a hiker’s cognitive performance, compounding the likelihood of misjudging the severity of their situation. The volunteers, who include UNM students, Park Service volunteers and members of the Grand Canyon Association, administer cognitive tests that measure attention, short-term memory and decision-making.

“Preliminary analysis does reveal a link between fatigue and cognitive ability,” Femling says, “but more work needs to be done.”

The research is also showing that while people usually take in plenty of fluids during the hike, they may not realize how much salt is lost through perspiration, which can lead to hyponatremia – a dangerously low blood sodium level.

“Having an appropriate mix of electrolytes and water is essential to success,” Femling says. “We’re still working on figuring out exactly what that is.”