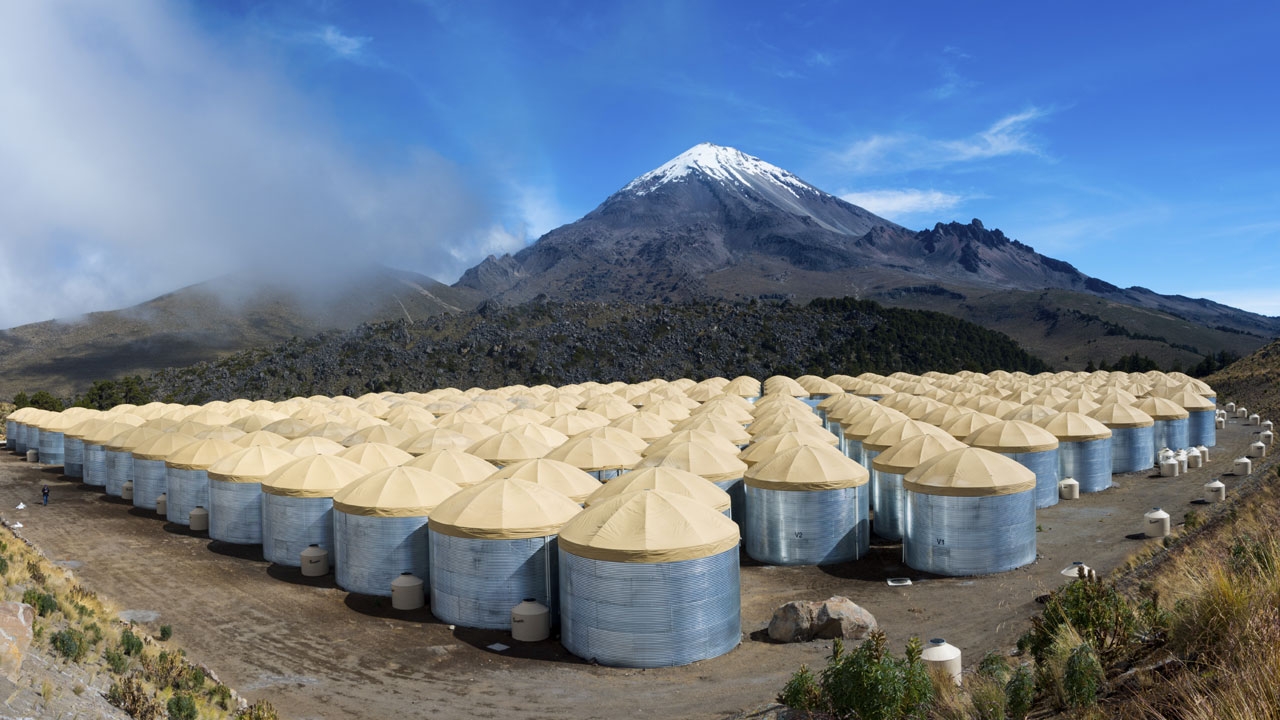 The HAWC Observatory, perched next to a volcano at an altitude of 13,500 feet, uses its 300 massive water tanks to scoop up the products of high-energy particle collisions happening in the upper atmosphere.
Credit: Jordan Goodman 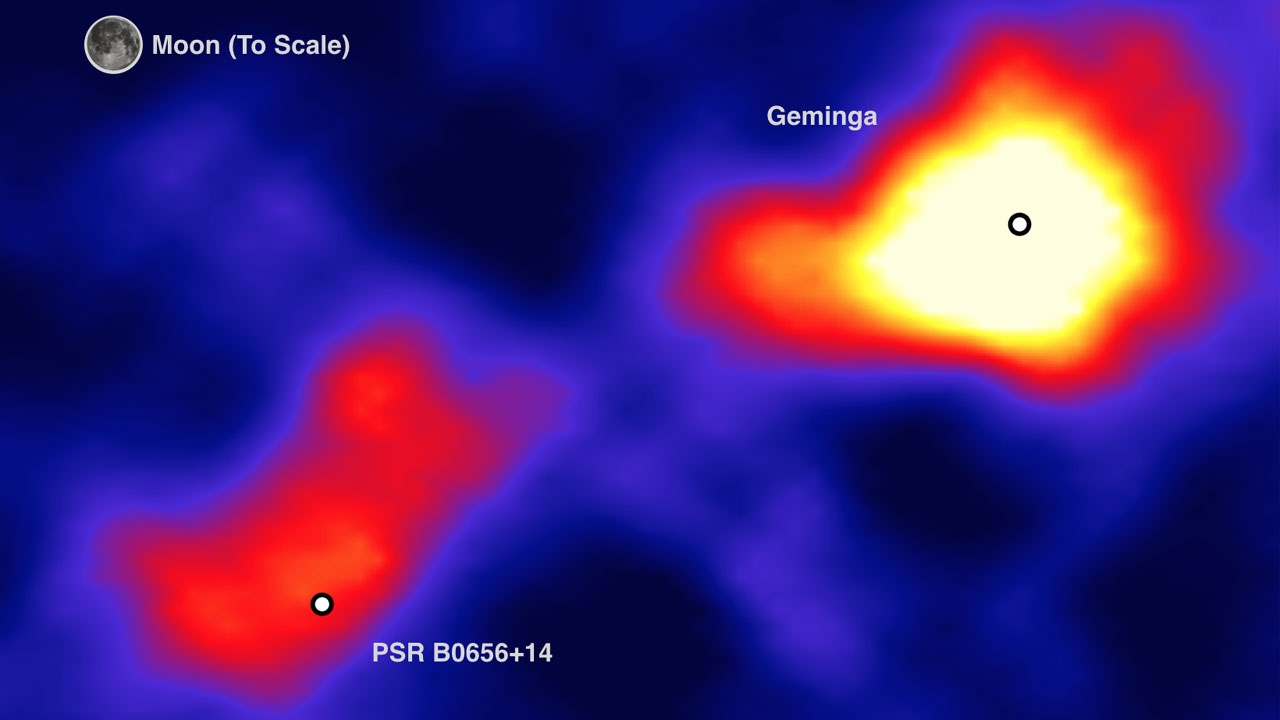 Gamma-ray sky map produced by the HAWC observatory for the region around the pulsars Geminga and PSR B0656+14, showing how large they appear in comparison to the size of the moon.
Credit: HAWC Collaboration

A mountaintop observatory in Mexico, built and operated by an international team of scientists, has captured the first wide-angle view of gamma rays emanating from two rapidly spinning stars. The High-Altitude Water Cherenkov Gamma-Ray Observatory, or HAWC, provided the fresh perspective on high-energy light streaming from these stellar neighbors, casting serious doubt on one possible explanation for a mysterious excess of anti-matter particles near Earth.

The research paper, “Extended gamma-ray sources around pulsars constrain the origin of the positron flux at Earth,” was published in the journal Science, and included scientists from the University of Maryland, The University of New Mexico, Los Alamos National Labs and others.

In 2008, astronomers observed an unexpectedly high number of positrons — the anti-matter cousins of electrons — in orbit a few hundred miles above Earth’s atmosphere. Ever since, scientists have debated the cause of the anomaly, split over two competing theories of its origin.

Some suggested a simple explanation: the extra particles might come from nearby collapsed stars called pulsars, which spin around several times a second and throw off electrons, positrons and other matter with violent force. Others speculated that the extra positrons might come from processes involving dark matter — the invisible but pervasive substance seen so far only through its gravitational pull.

Using new data from the HAWC observatory, researchers made the first detailed measurements of two pulsars previously identified as possible sources of the positron excess. By catching and counting particles of light streaming from these nearby stellar engines, HAWC collaboration researchers found that the two pulsars are unlikely to be the origin of the positron excess. Despite being the right age and the right distance from Earth, the pulsars are surrounded by an extended murky cloud that prevents most positrons from escaping, according to results.

“This new measurement is tantalizing because it strongly disfavors the idea that these extra positrons are coming to Earth from two nearby pulsars, at least when you assume a relatively simple model for how positrons diffuse away from these spinning stars,” said Jordan Goodman, professor of physics at the University of Maryland and the U.S. spokesperson for the HAWC collaboration. “

Francisco Salesa Greus, the lead contributing author of the new paper and a scientist at the Institute of Nuclear Physics of the Polish Academy of Sciences in Krakow, Poland, added that “we are closer to understanding the origin of the positron excess after excluding two of the main source candidates.”

An eye in the sky
As with an ordinary camera, collecting lots of light allows HAWC to build sharp images of individual gamma-ray sources. The most energetic gamma rays originate in the graveyards of big stars, around stellar remains like the spinning pulsar remnants of supernovae. But that light doesn’t come from the stars themselves. Instead, it's created when the spinning pulsar accelerates particles to extremely high energies, causing them to smash into lower-energy photons left over from the early universe.

The size of the debris field around powerful pulsars, measured by the patch of sky that glows bright in gamma rays, tells researchers how quickly matter moves relative to the spinning stars. This enables researchers to estimate how quickly positrons are moving and how many positrons could have reached Earth from a given source.

Using a recently published HAWC catalog of the high-energy sky, scientists have absolved the nearby pulsar Geminga and its sister — the pulsar PSR B0656+14 — as sources of the positron excess. Even though the two are old enough and close enough to account for the excess, matter isn’t drifting away from the pulsars fast enough to have reached the Earth.

Professor John Matthews, Research Assistant Professor Robert Lauer, and graduate student Zhixiang Ren in UNM’s Department of Physics and Astronomy, are members of the HAWC Collaboration and co-authors of this publication. Matthews designed the system to calibrate the 1,200 photo-sensors that are HAWC’s “eyes,” while Lauer led the design and implementation of the software that is used to produce and analyze the sky maps for all gamma-ray analyses, including the modeling of the pulsars, which allows scientists to use the HAWC data to test arbitrary scenarios for the shape or spectrum of a gamma-ray source.

This measurement wouldn’t have been possible without HAWC’s wide view provided by the UNM scientists. It continuously scans about one-third of the sky overhead, which provided researchers with a broad view of the space around the pulsars. Other observatories watching for high-energy gamma rays with a much narrower field of view missed the extended nature of the pulsars.

Together with Patrick Younk and Hao Zhou, scientists at Los Alamos National Labs, Lauer realized that the observation of extended objects like Geminga or variable emission from other sources required a new approach for analyzing the gamma-ray sky maps.

The HAWC Observatory sits at an elevation of 13,500 feet, flanking the Sierra Negra volcano inside Pico de Orizaba National Park in the Mexican state of Puebla. It consists of more than 300 massive water tanks that sit waiting for cascades of particles initiated by high-energy packets of light called gamma rays—many of which have more than 10 million times the energy of a dental X-ray.

Matthews designed the laser calibration system, in which a central laser sends light through a network of optical fibers to all 1,200 photo-multipliers (i.e. photo sensors) in the HAWC water tanks. This calibration allows scientists to measure the arrival time of each particle in the gamma-ray shower with a precision of less than a nanosecond.

When these gamma rays smash into the upper atmosphere, they blast apart atoms in the air, producing a shower of particles that moves at nearly the speed of light toward the ground. When this shower reaches HAWC’s tanks, it produces coordinated flashes of blue light in the water, allowing researchers to reconstruct the energy and cosmic origin of the gamma ray that kicked off the cascade.

“Our advanced analysis method was crucial for not only detecting Geminga and its sister, but actually extracting the science about how the gamma rays are distributed,” said Lauer.

“Thanks to its wide field of view, HAWC provides unique measurements on the very-high-energy gamma ray profiles caused by the particle diffusion around nearby pulsars, which allows us to determine how fast the particles diffuse more directly than previous measurements,” Zhou said.

It’s possible that a new insight about the astrophysics of these pulsars and their local environments could account for the positron excess at Earth, but it would require a more complicated theory of positron diffusion than physicists in the collaboration think is likely. On the other hand, dark matter may provide the right explanation, but more evidence will ultimately be needed to decide.

"The small UNM group has made a disproportionate contribution to the science of HAWC by identifying tasks that are of prime importance for the experiment,” added Matthews.

The National Science Foundation, the U.S. Department of Energy and Los Alamos National Laboratory provided funding for the United States’ participation in the HAWC project. The Consejo Nacional de Ciencia y Tecnología (CONACyT) is the primary funder for Mexican participation.

** Written by Chris Cesare/UMD with UNM contributions by Steve Carr.