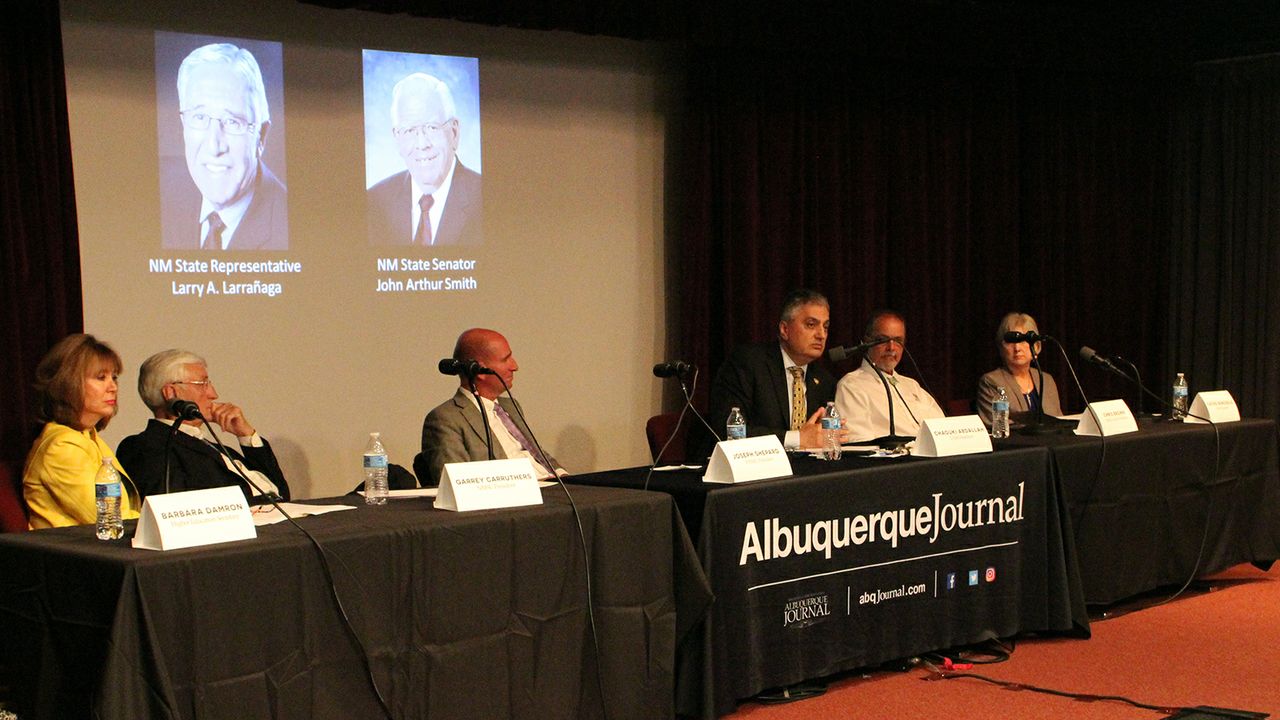 Eight panelists took part in a public forum sponsored by the Albuquerque Journal. They discussed the sustainability of higher education. 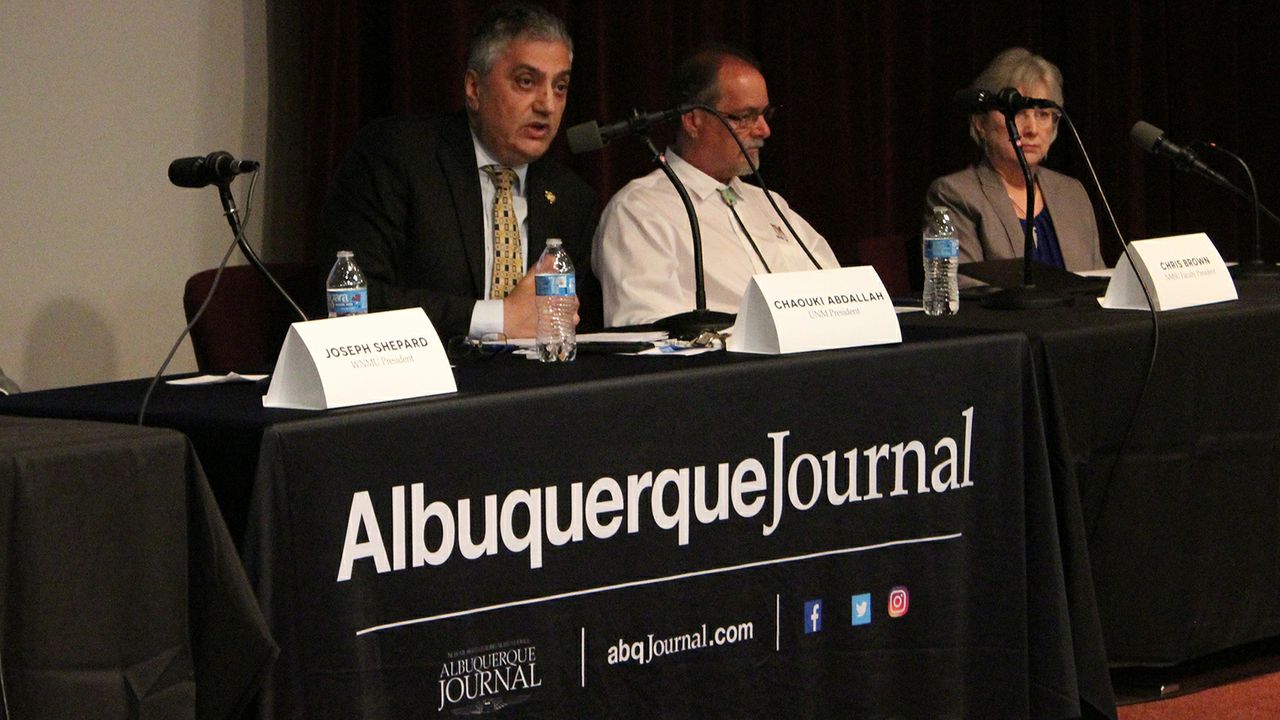 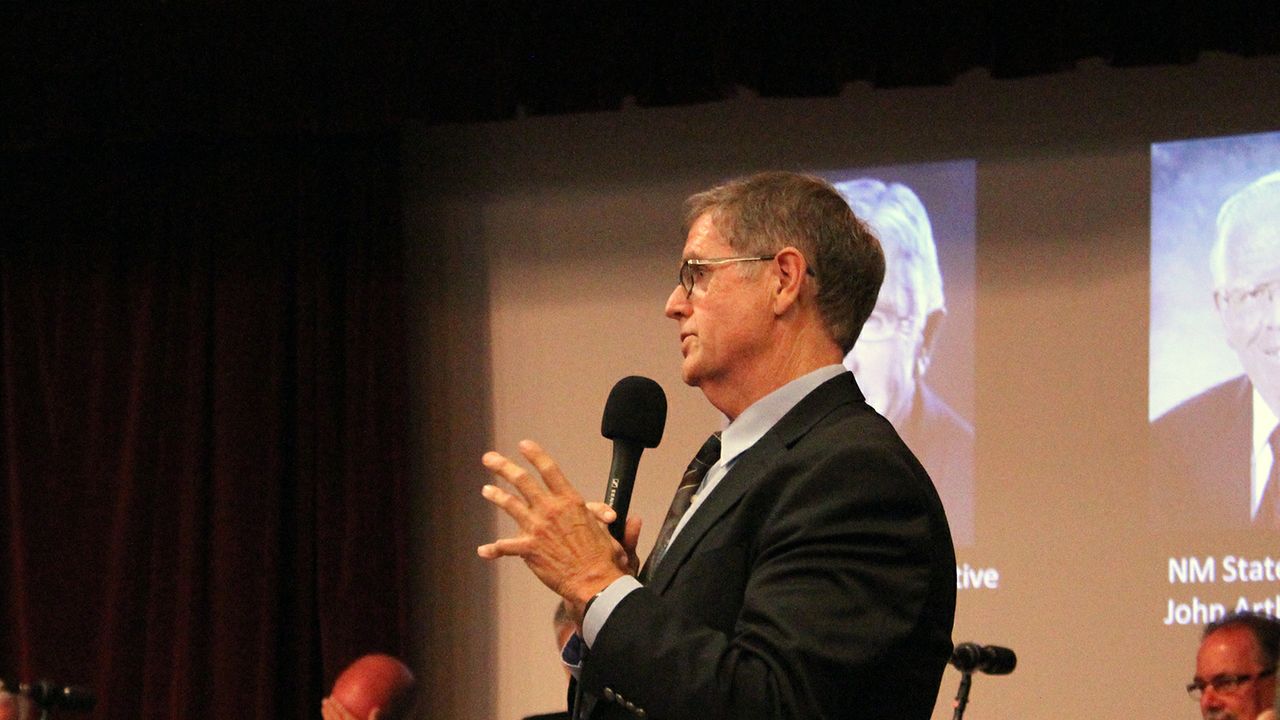 New Mexico has nearly three dozen higher education institutions, which together absorb about $750 million of this year’s general fund budget and service more than 100,000 students.

Funding those institutions, consolidating services and increasing revenue were issues at the heart of a public forum held Wednesday night. Kent Walz, senior editor of the Albuquerque Journal, moderated the event, organized by the newspaper.

With hardly an empty chair in the room, the eight-person panel took turns addressing the crowd, along with those who chose to tune in for the live broadcast on 89.1 KANW and Facebook.

Panelists discussed the challenges facing higher education, including increasing relevancy to online students, graduation rates and student retention, and recovering from major funding cuts. They also touched on ways to maintain the sustainability of so many post-secondary institutions and how to make higher education more efficient without hurting access or the economy and cultures of rural communities.

“For every complex problem, there is an answer that’s clear, that’s simple and that’s wrong,” Abdallah said quoting journalist and scholar of American English H.L. Mencken. “So, you can’t jump to conclusion.”

Damron explained the decentralized nature of New Mexico’s higher education world, ranging from military, tribal and community colleges to high level research universities with branch campuses. She pointed out that with a population of around 2 million people, the state has 77 access points (main campuses, branches or learning centers) where 133,000 students are enrolled in full or part time post-secondary courses. Each institution currently has its own governing or advisory board that makes spending and policy decisions, but recent discussion has focused on bringing the state’s colleges and universities into a single statewide system. Many of these institutions are specified in the state’s constitution which would have to be amended with lawmaker and voter approval.

“The assumption is there should be one board over all,” Damon said. “But that may not be so.”

Carruthers added his concern that is that there is “insufficient political courage” to create one system.

Smith, who chairs the state senate finance committee, said despite recent cuts, taxpayers support of high education in New Mexico is better than almost any other state. Thirteen percent of the general fund budget, $750 million, is going to higher education this year.

Abdallah reminded listeners there is no typical student; and universities must meet the needs of a wide range from traditional freshmen to military vets to older adults switching careers by providing support systems and services. He concluded that in order to be more effective, efficient and sustainable, higher education institutes must reduce failure and maximize quality.