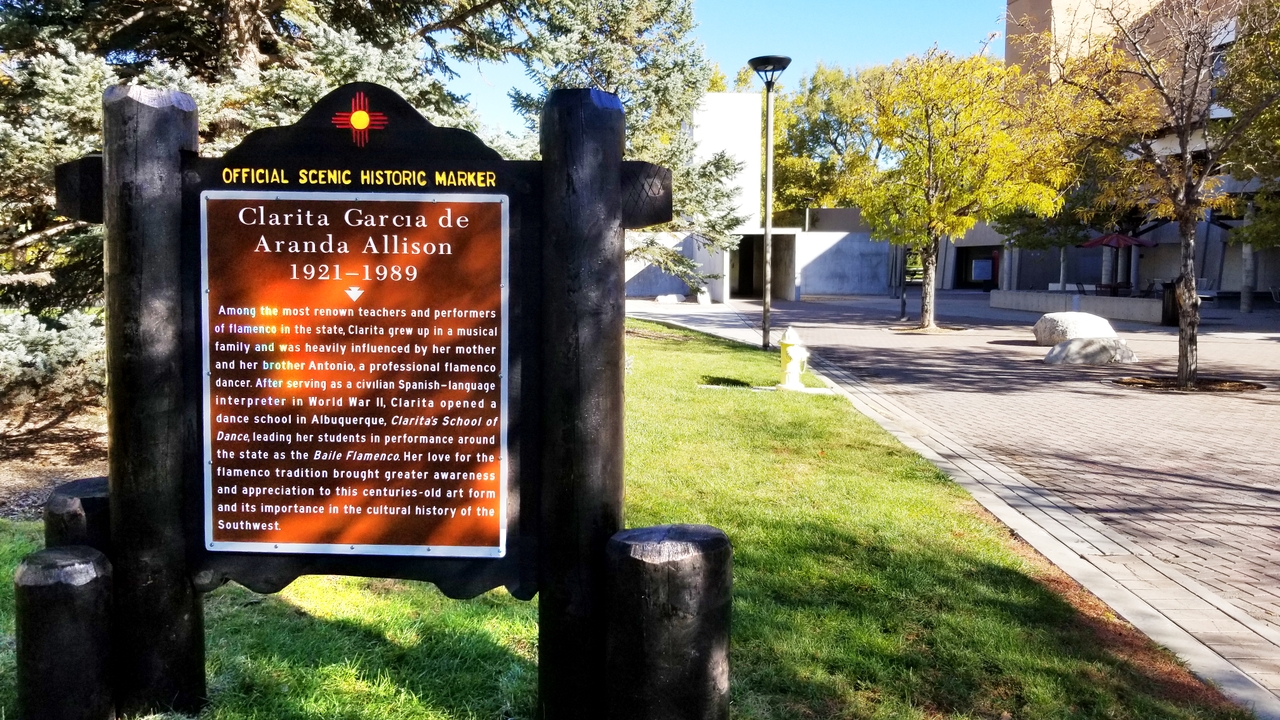 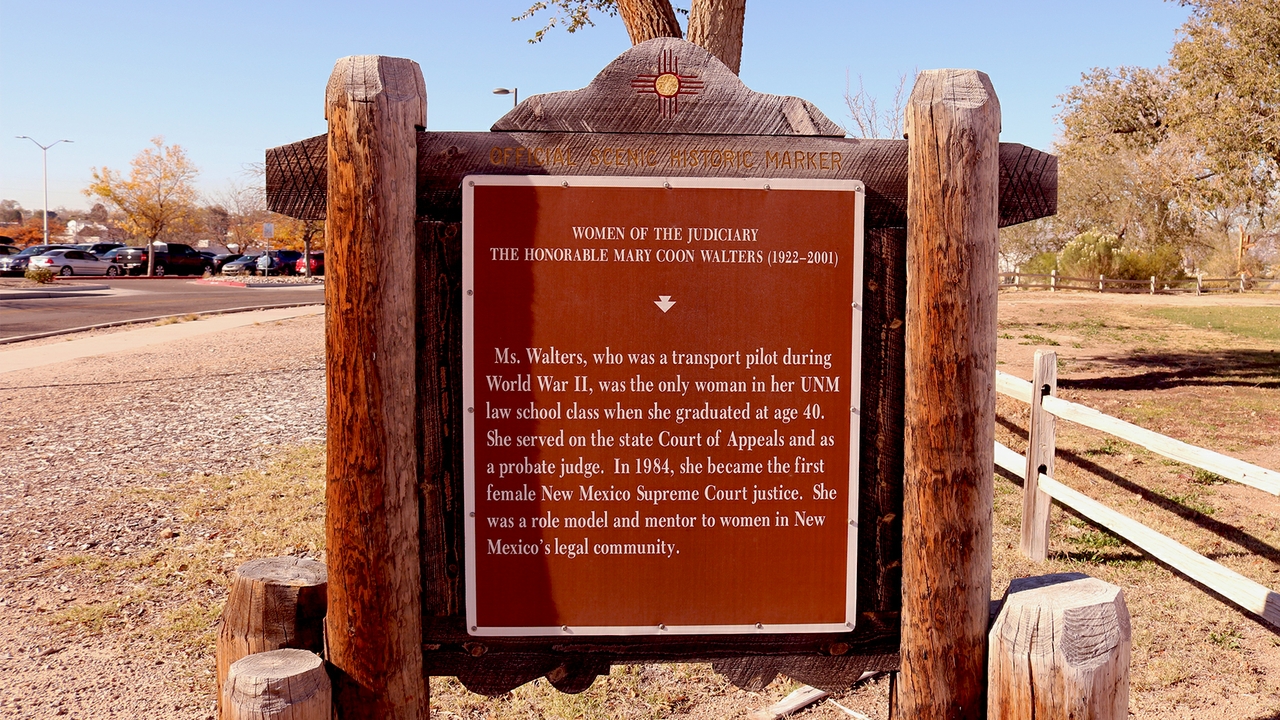 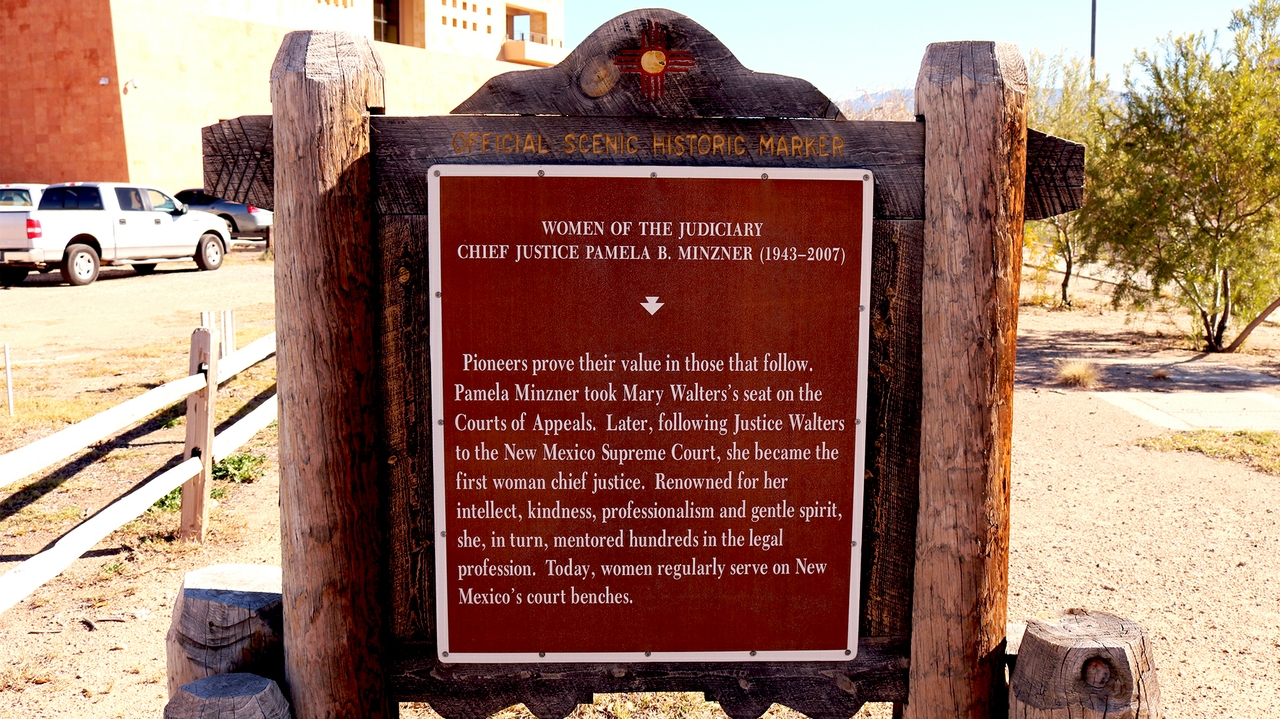 By Steve Howe May 30, 2019
Categories: Inside UNM Facilities Management

The grounds of The University of New Mexico (UNM) are known for unique features like the Duck Pond, public art installations, and the beautiful gardens and landscaping. But recently, two New Mexico Official Scenic Historic Markers have sprouted on north and central campuses, enhancing the public spaces and bringing education out of the classroom and onto the grounds.

The traditional, rustic-style markers, typically found along the state’s roadways, teach campus users about important New Mexico women who’ve had an impact on the state’s history and culture.

The markers represent over a decade of hard work by a small, but dedicated group of friends committed to seeing women honored on the state’s historic marker signs. In 2006, Beverly Duran, Patricia French, and Alexis Girard noticed none of the 500 markers at the time recognized the accomplishments of women in the state.

Women were occasionally mentioned on the markers, though usually unnamed, referenced only as “his daughter” or “his wife.” According to Duran, in order to “honor historic women and to correct inequities on New Mexico’s scenic markers,” the group established the NM Historic Women Marker Initiative. In the years since, the group has been instrumental in the placement of 75 markers celebrating the accomplishments of New Mexico women, including those on the UNM campus.

The first marker, titled “Women of the Judiciary,” appeared in 2017 and is placed adjacent to the UNM Law School near the UNM North Golf Course entrance. This two-sided marker features Justice Mary Coon Walters, who was not only a World War II transport pilot, but the first woman to serve on the New Mexico Supreme Court. On the opposite side of the sign from Walters, Chief Justice Pamela Minzner is recognized as the first woman to serve as Chief Justice.

In the late summer of 2018, the second historic marker was erected near Carlisle Gym on UNM’s central campus. Also a two-sided marker, one side highlights the art of flamenco dance and its history in New Mexico, and the opposite side describes the contributions of Clarita Garcia de Aranda Allison. Allison, through her teaching and performing, expanded awareness and appreciation of the flamenco tradition in New Mexico.

The raised, grassy area in front of Carlisle Gym is fitting placement. The building, which is home of the Elizabeth Waters Center for Dance, contains the studios in which Allison’s daughter, Eva Encinias-Sandoval, teaches flamenco, carrying on her mother’s work. Encinias-Sandoval was responsible for the introduction of flamenco dance as a field of study at The University of New Mexico, which, as the sign states, “is the first and only institute of higher education in the world” to do so. Allison’s granddaughter, Marisol Encinias also teaches flamenco at UNM, making the marker and its location a recognition of the entire family’s contributions to the art of dance, as much as celebration of the dance itself.

Like other Official Scenic Historic Markers placed around the state, the New Mexico Department of Transportation manufactured and installed the signs, but through formal agreements, UNM will maintain those located on campus property.