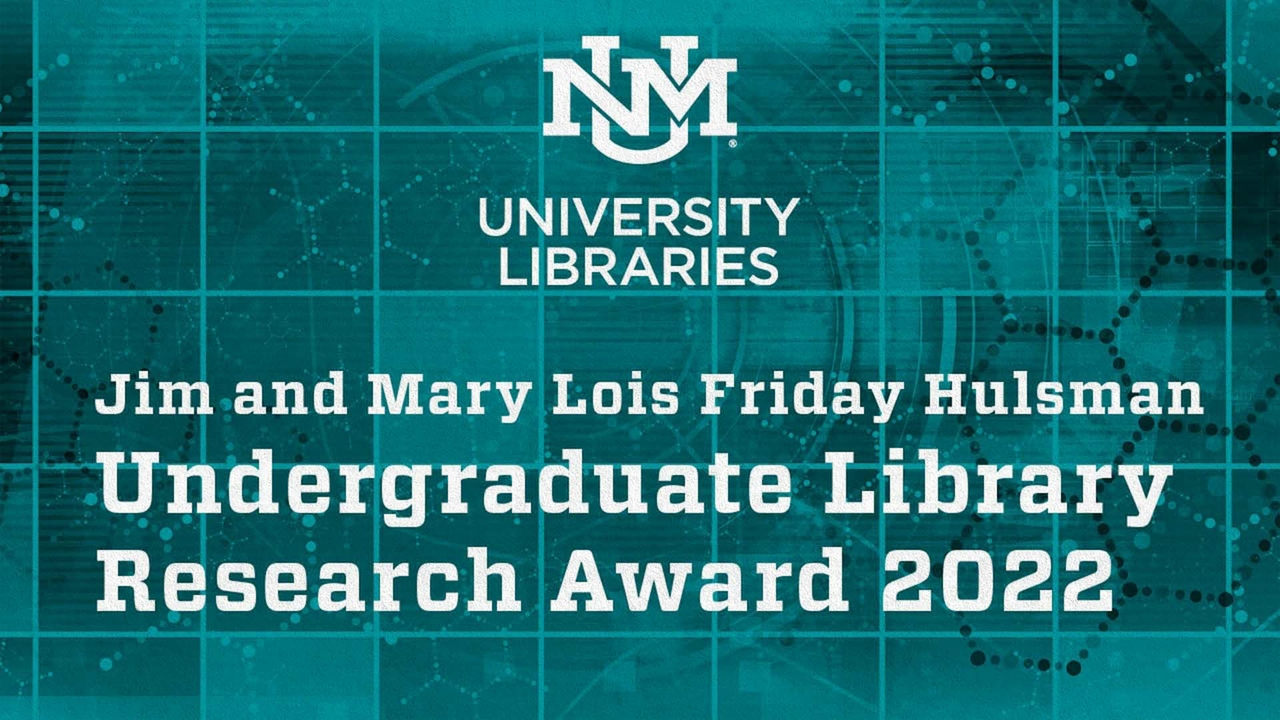 Libraries have long been the center for student research and learning, from the ancient collections of clay tablets to the modern library containing books, digital files, and other resources in spaces meant to nurture and support learning. At The University of New Mexico, the University Libraries continue to support the tradition with its premier assemblage of books, as well as special collections, archives, digital collections, rooms and spaces, computers and other electronics, and trained staff.

Since 2018, except for a COVID hiatus in 2021, the University Libraries has presented the Jim and Mary Lois Friday Hulsman Undergraduate Library Research Awards to students exhibiting excellence in research and information literacy skills. Three recipients are selected for each category: Emerging Researcher and Advanced Researcher. The award committee accepts original research projects completed by individuals or groups in all formats, including, research papers, design portfolios, compositions, posters, and digital projects. Award recipients receive cash prizes and their research is added to the UNM Digital Repository. 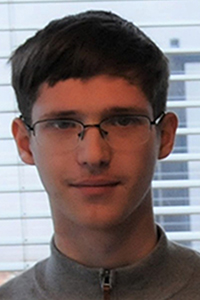 First place winner in the Advanced Researcher Category Etienne G. Allred, a junior, described how he conducted the research on his paper SOE and its Contribution to the Allied War Effort during the Second World War which delves into the Special Operations Executive, a collaborative of intelligence groups during World War II.

“I am from an Air Force family and have lived in eight different states. It has given me the love of learning about new places and their past. Currently a double major in History and French, I am planning on pursuing graduate school in international affairs with a goal of working in an embassy. My hobbies include collecting stamps and reading French comic books,” Allred told the award judges.

Allred’s research was submitted as his final project for the History 421 (Modern Britain 1660-Present) class he took with associate professor of History Caleb Richardson during the Fall 2021 semester.

“UNM libraries provided me with the physical books I used for my research and access to the JSTOR database from which I accessed key journal articles,” he noted.

“Etienne’s paper is an important contribution to the histories of intelligence, covert operations, and subversion, areas of study that have attracted renewed attention in recent years,” Richardson said in a letter of support to the judging committee. “The sources that Etienne consulted for this project included historical monographs and essay collections, scholarly articles, memoirs, historical sources in the digital archives of major British museums, and material from specialist journals in military and intelligence history, adding that Allred also employed French-language sources, and audio recordings of oral history interviews of SOE veterans from the Imperial War Museum ̶ firsthand sources in the history of intelligence and covert operations are, for obvious reasons, very hard to come by. He took full advantage of the resources of UNM Libraries, particularly institutional subscriptions, which allowed him to locate some sources in relatively obscure journals.”

“I am thrilled to have won the award and very grateful for Dr. Richardson, who encouraged me to apply and helped me along the way. It is amazing that my work is a part of the UNM Digital Repository. Receiving such an award was the highlight of a challenging semester,” Allred said.

Sophomore Mikenzie E. Chessman won second place for her research project Bubonic Plague: Public Health Warnings from an Ancient Disease. She is studying Population Health and hopes to attend UNM's School of Medicine to pursue her MD and MPH degrees.

Third place winner senior Katherine Atkinson submitted The Art of War and plans to pursue careers in art direction and screenwriting and obtaining a master’s degree in Library and Information Studies to become a film archivist. 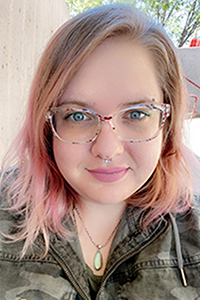 In the Emerging Researcher Category, first place winner was Hevyn L. Heckes, a senior who examined the issue of Missing and Murdered Indigenous Women (and Children) – A Global Problem.

In fall 2021, Heckes covered an MMIW rally at Tiguex Park as a freelance reporter for the Daily Lobo. She learned that Indigenous women are much more likely to go missing and/or be murdered than she was as a white woman.

“The final paper for Dr. Kathy Powers-Jordan’s International Relations class offered an opportunity for me to explore this issue further, thereby educating myself regarding the global scope of MMIW and its roots in destructive colonization,” Heckes explained in her research submission to the judges.

“When I began my research project, I sought to learn why Indigenous women and children are four times more likely to be victims of abduction and murder than I am,” she said in her submission. “At that time, I had only a vague notion that climate change and the foster care system were somehow linked to the crisis. The resources made available to me through UNM Libraries helped me learn how extractive capitalism, jurisdictional barriers, and the paradigms of colonization contribute to the crisis. When the US Census Bureau yielded no digestible information, I used Research Guides and the EBSCO database to access statistics that had been used by Indigenous Politics scholars previously and were thus credible for use in my paper.”

In her letter of support to the judges, Powers-Jordan said, “Hevyn is smart, hardworking, has vision, and is incredibly open to learning about new ideas and as well as sharing her own. As a returning student after several years in the workforce, she brings maturity, experience, and organizational knowledge that will help her make the most of this award. I have been one of her mentors since she arrived on campus and hope to continue to guide this bright student.”

Second place winner Colin M. Rankine, a junior, submitted Asin Yahola's Wife. After nine years as a massage therapist at a San Francisco spa, Rankine joined the University of New Mexico as a History major with a minor in Professional and Technical Communications. He works at the UNM Art Museum as a communications assistant.

Sophomore Haley G. Hughes won third place for Mental Illness and Human Dignity in Jane Eyre. Hughes is a student in the Combined BA/MD Program and a Regents' Scholar. She studies Health, Medicine, and Human Values. Upon completion of her studies, she plans to practice medicine in New Mexico, her home state. Her academic interests include addressing health disparities and barriers that impede access to quality healthcare.

You can read more about each student and their research at the 2022 Hulsman Award website.

View the award winning projects in the UNM Digital Repository.