Paul Hutton, professor of history at the University of New Mexico, is featured in the PBS American Experience series in the episode"Butch Cassidy and The Sundance Kid," which airs Tuesday, Feb. 11 at 8 p.m. and again on Sunday, Feb. 16 at 3 p.m., both on Channel 5.1. Hutton shares his extensive knowledge of the American west and the film's impact as one of several experts on the show.

The critically acclaimed film was released in 1969 and features Wild West outlaws Butch Cassidy and his partner Harry Longabaugh as they migrate to Bolivia while on the run from the law. Since it's release, it has been regarded as one of the most significant and historic portrayls of the American west and its impact on our culture.

Hutton has written, produced or appeared in over 150 television documentaries over the course of his career, including the Ron Howard film "The Missing." He has also received numerous awards for his historical literary work.

For more informaton about the show, visit the American Experience website. 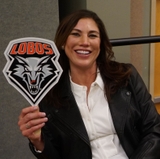