Her peers know her as an exceptional engineer. But to some Indigenous people, Sandra Begay is legendary.

“Like many Native American students in STEM, I knew of Sandra before I met her,” said Suzanne Singer, who is Navajo and interned under Begay at Sandia National Laboratories in 2008. “She was the ‘iconic’ Native woman engineer — an example of what could be achieved through hard work and dedication.” 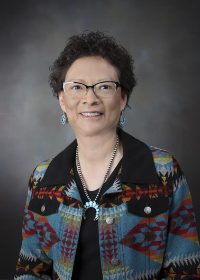 Begay, member of the Navajo Nation and a University of New Mexico alumna, is being honored for substantial work to advance opportunities for Indigenous students and professionals in science, technology, engineering and math education and careers. She received the 2020 Indigenous Excellence Award from the American Indian Science and Engineering Society during its annual conference, held virtually Oct. 15–17.

Dozens of American Indian students have worked with Begay through the Department of Energy’s Office of Indian Energy Policy and Programs internship, a program Begay started at Sandia in 2002. Through the program, she inspires new generations of Native American students and professionals to pursue work and research in engineering fields, especially in the energy sector.

“I tried to convey to my interns that I expect them to be respectful leaders, experienced tribal professionals and STEM champions within their careers,” Begay said. “I reminded them that they have the academic credentials, and the internship provided them with real hands-on experience in tribal energy development.”

Since joining Sandia in 1992, Begay has worked to improve access to electricity in tribal communities, where remote housing and lack of infrastructure can make getting connected to the grid a financial and logistical challenge. Without electricity, families don’t have refrigerators, running water, adequate heating and cooling, lights or internet access.

“My passion for empowering tribal communities through renewable energy comes from seeing the impact on my Navajo grandmother receiving electrical power for the first time,” Begay said. “When I was in junior high, my family and I drove at dusk to see her new porch light. My dad and mom did not grow up with electricity, and many families living on the Navajo Nation do not have electricity. Residential photovoltaic solar energy is seen as a viable off-the-electrical-grid option.”

With Begay’s help, tribes have modified their energy policy; made plans to form a tribal utility; laid the groundwork to develop future, large scale solar plants; and have built a solar farm to power a village.

Begay said her mentorship is rooted in providing interns real-world experience. She teaches her students the complexities of issues facing Native communities by traveling with them to meet tribal government leaders and community members face to face.

These meetings made a personal and lasting impact on professor Lani Tsinnajinnie of the University of New Mexico’s School of Architecture and Planning, who was Begay’s intern in 2006. Tsinnajinnie, of Navajo and Filipino descent, originally hails from Na’Neelzhiin, on the eastern edge of the Navajo Nation.

As her own community leaders struggled to explain when they would build new water pipelines, she heard echoes of tribal leaders she had met as an intern discussing difficulties in providing electricity.

“This led me to focus my expertise in water resources and hydrology so that I could use my knowledge to help my community best manage the water that will be delivered in a few years when the infrastructure is in place,” she said.

Tommy Jones, an intern in 2014 with Cherokee and Aleut heritage, said “Giving back is ingrained into Sandra, and that perspective of raising the collective well-being across Indian Country is infectious to those who have been fortunate enough to work with her.”

​Many of Begay’s interns have become highly regarded technical professionals and leaders within tribal organizations, industry, academia and nonprofit groups.

“Her impact is apparent when you see how her interns have thrived in their careers to become experts and leaders in their fields,” said Singer, who went on to cofound Native Renewables, a nonprofit that provides renewable energy systems to Navajo Nation homes. “She has created a supportive environment among her interns, who love meeting each other and crossing paths.”

Jones, who is now a contractor to the DOE’s Office of Indian Energy Policy and Programs, said “Every major or minor event I attend I find either an intern, current or past student, or professional that Sandra has helped in some way achieve their goals.”

A version of this press release was first published by Sandia National Laboratories. It was republished with permission.