UNM Newsroom / News / If these shelves could talk, oh the stories they’d tell 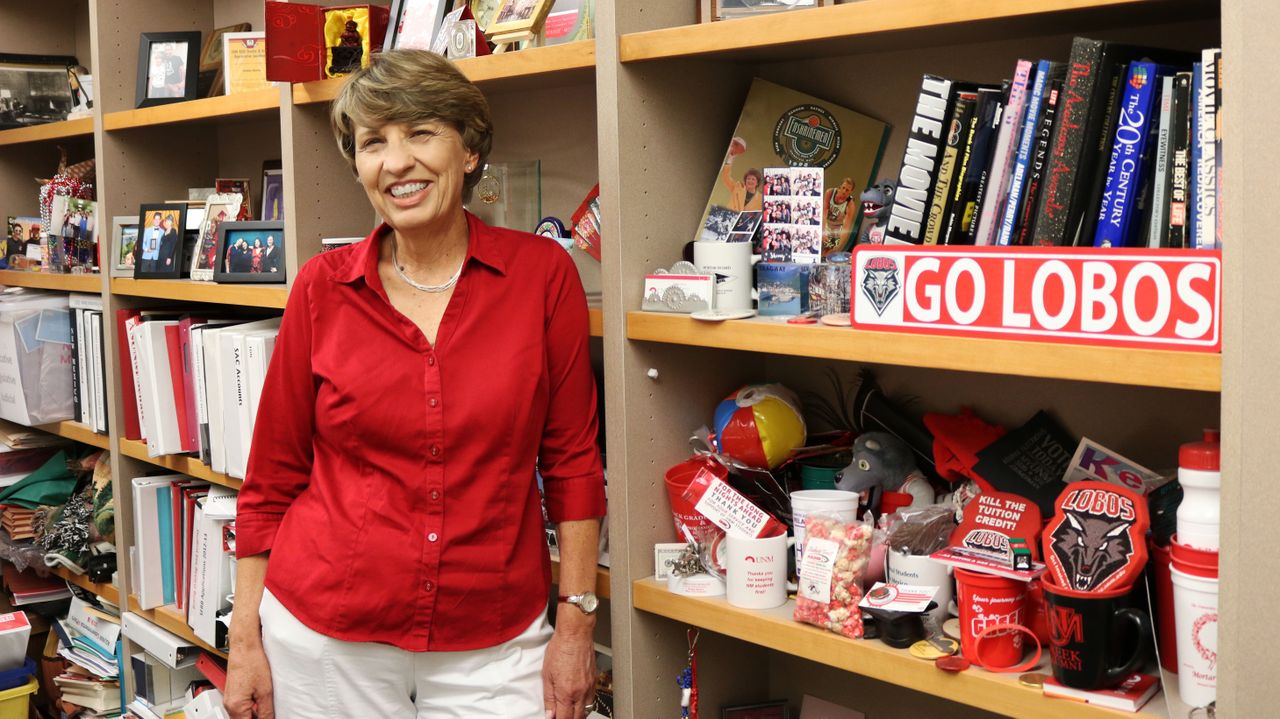 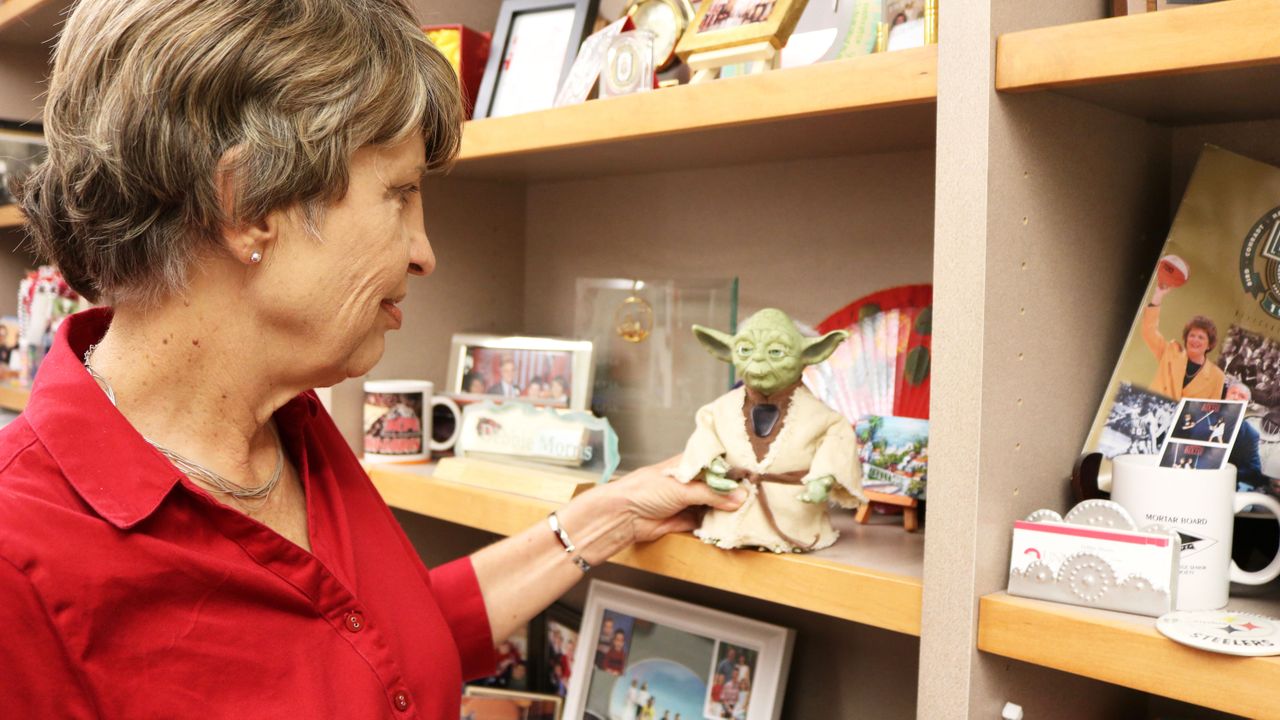 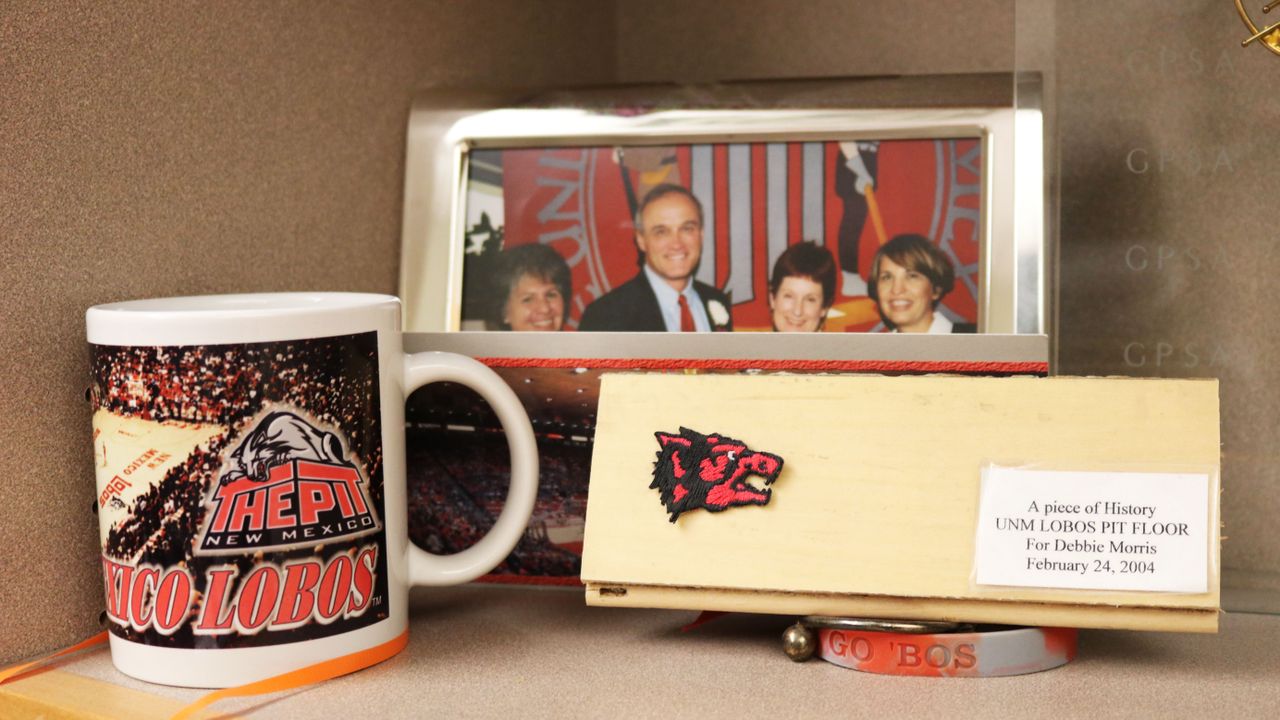 A piece of UNM history. 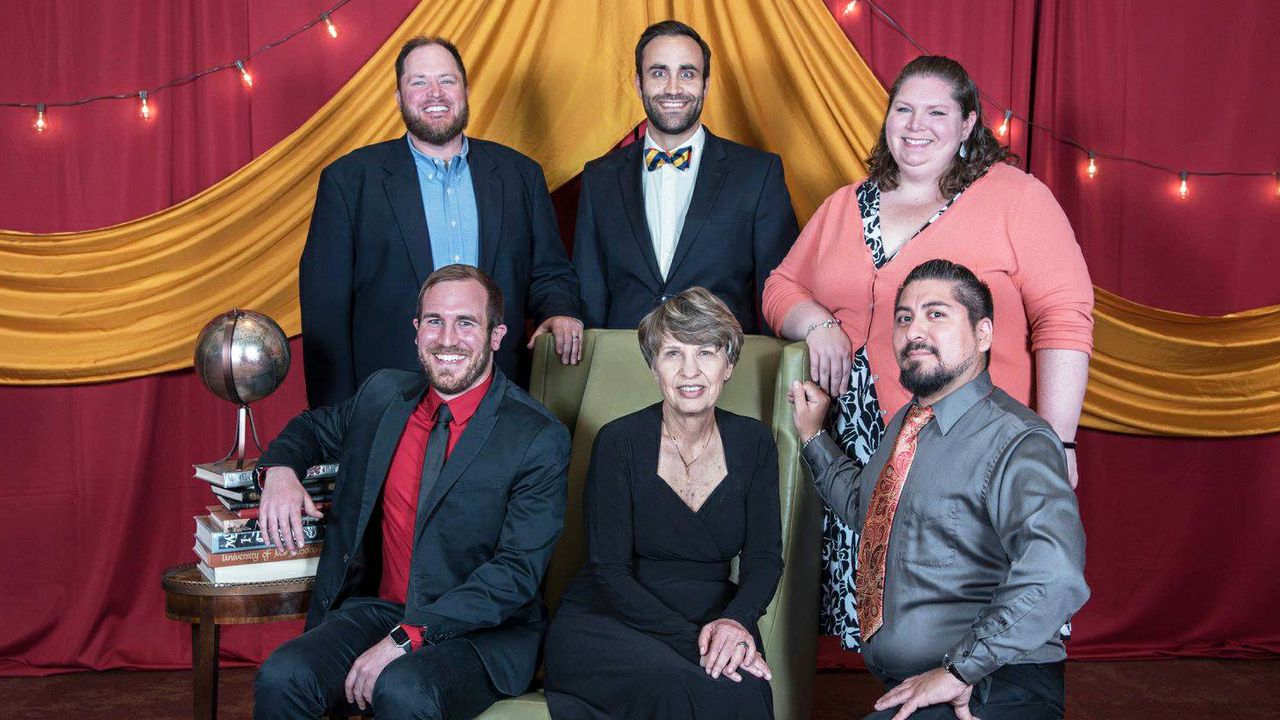 posed for a group photo during the recent 2017 Recognition Reception.

If these shelves could talk, oh the stories they’d tell

It’s been over 40 years. Can you imagine all the people Debbie Morris has met at UNM over the decades, not to mention the change in clothes they were wearing? With as much change as she has seen at the University, one thing has remained the same and that’s why she’s grateful.

“Everything is crazy right now,” said Morris from her office in the Student Activities Center on the first floor of the Student Union Building.

The office is buzzing as it prepares for another round of New Student Orientation, as well as planning this year’s upcoming events that help students “make the memory.” First up, Back to School Days as a fun welcome for the students returning to campus. It’s Morris’ favorite time of the year.

“Right before the fall semester starts and the band starts practicing, I love it,” said Morris. “Right about that time it feels like a college campus. The res halls are busy. It’s an exhilarating time.”

When I asked her what she’ll miss about UNM after she retires at the end of July, it quickly became not a what, but a who—and that’s the students.

“I truly believe in the motto of our office, ‘College is more than going to class, get involved’ because that’s where you learn so many essentials skills." — Debbie Morris

“I feel like I have been so lucky to get to work with students closely, every day,” she said. “I love Facebook because I get to follow these students I’ve seen over the years and see what great things they are doing, with their children, how happy they are with their careers.”

She was emotional, and suddenly I was too from her genuine feeling of appreciation for the generations of Lobos she has watched grow-up. But one could argue she was one of those Lobos who has grown-up here, too.

“Some of my family thinks I started at UNM and never left,” said Morris. “I started stopped and started again”

UNM Student Union Building
Santa Ana A & B
Light refreshments will be provided.

That first start was in the fall of 1973 when the Vietnam War was ending, bellbottoms were the fashion and supergroups like the Rolling Stones and Pink Floyd were making headlines. Politics were also front and center with the Watergate Hotel finding its place in history.

Graduating with a bachelor’s in Business in 1977, Morris went into banking and in 1979 she decided to use her talent for numbers to work in the Bursars Office at UNM as an accountant. She took one more stab at life outside the Pack, but quickly returned in 1983 to work in the Student Government Office.

I had to become an accountant myself to figure out just how long Morris has been in her current position—she became Director of Student Activities in 1991. And coincidently if you google fashion for that same year, bell bottoms tried to make a comeback.

Students have always given Morris a sense of purpose and belonging and that’s what has kept her at UNM for 37 years. Having a good laugh recalling some of her favorite memories, Morris said many people have asked her if she is going to write a book about some of the craziest things students have done.

“Some I have promised I’d never divulge in public,” she said with a large grim—no doubt remembering a student and the now giggle-worthy experience.

“One thing that sticks out in my mind that is really special is, right after 9-11, the students pulled together to put on a candlelight vigil at the Duck Pond,” Morris recalled. “Watching them do this and deal with a life altering event was life changing for us all. They did everything themselves. They arranged for a bagpiper to play. He walked up from the cactus garden by Zimmerman, and the music along with the candles lining the pond was so emotional. I’ll never forget it.”

She also talked about the very first Red Rally bonfire she put on with the students. When I asked her what year that was, she mentioned, “I think in terms of students not in years. I can tell you there was a very young Kevin Stevenson there.” Stevenson is a current UNM employee.

“So many people who are currently working at UNM have been former students,” says Morris. “That’s a really rewarding feeling for the University. Having a great experience at UNM as student speaks volumes because they want to stay or come back here to work—there are tons of them.”

I could agree more as I am one of those students myself. Before asking Morris the cliché retirement question about travel plans—which she has many exciting trips planned—I asked her about the countless Lobo tchotchkes on her office shelves.

“I learn from the students. It keeps my spirits up. They do wonderful things, like travel all over the world. These are gifts they have brought me. I can put a name to every item, they all have a place in my heart. Although, I had to stop collecting mugs, that got way out of hand,” she laughed.

Before I wished Morris all the best in her retirement, she reminded me why she has stayed so long and it’s something that has been consistent throughout her tenure on campus and that’s having the opportunity to witness the lasting effects of the college experience on young people.

“I truly believe in the motto of our office, ‘College is more than going to class, get involved’ because that’s where you learn so many essentials skills and get your college experience—what you’re going to look back on, like friendships and events. College is so much more than just going to class.”

On a side note, it would be erroneous of me as a writer not to mention Morris’ love of Star Wars.

“I’m a huge fan,” she said. “I’ll tell you about how Star Wars Day—May the 4th be with you, came about.  All of us in the office are Star Wars fans and we all got to talking about it and at first it was going to be something small here in our entryway and then it got bigger and now it’s a huge campus event. It was us just really having fun because we’re nerds.”