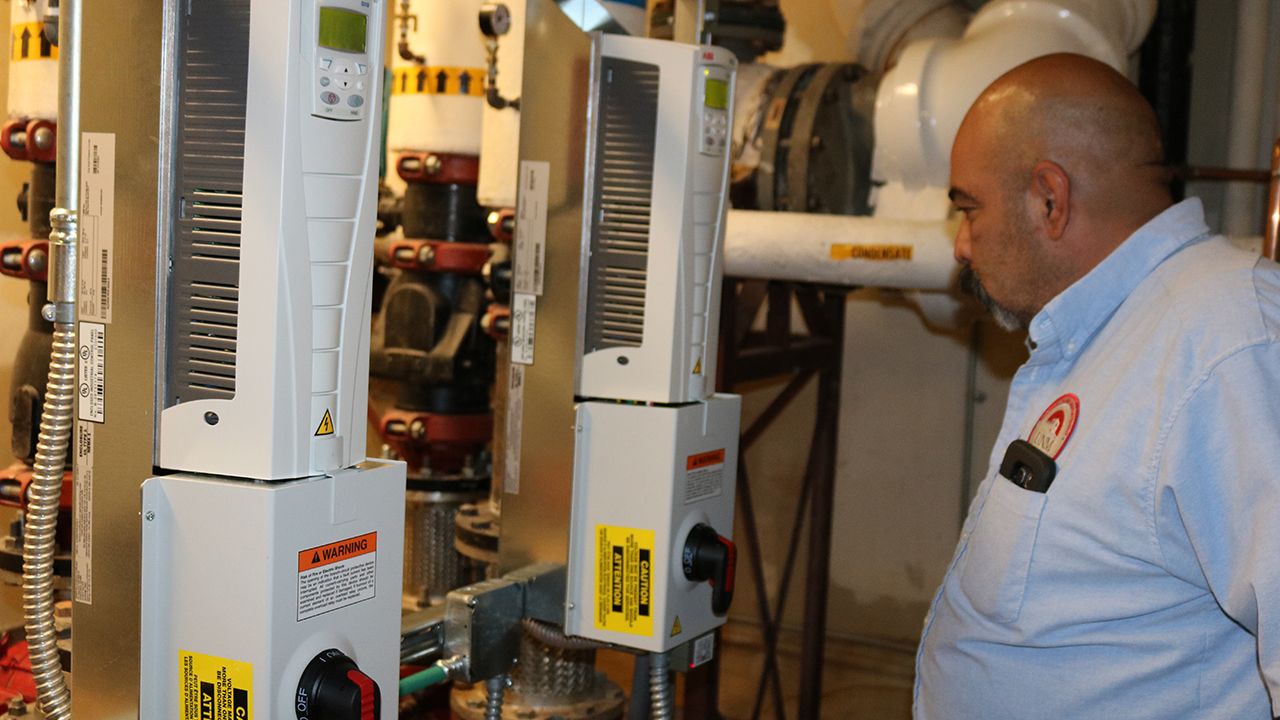 These new Variable Frequency Drives (VFDs) can be found in the mechanical rooms at Dane Smith Hall and were installed to improve efficiency of the HVAC systems.
Credit: Rachel Stone 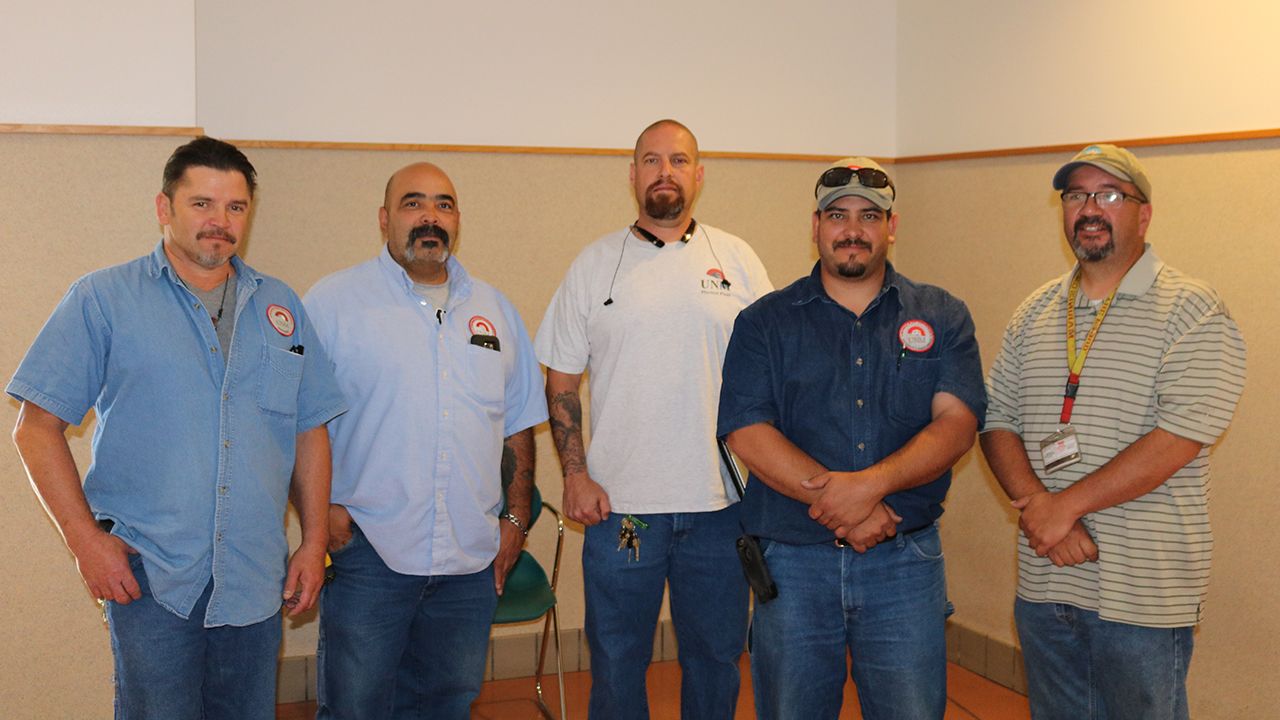 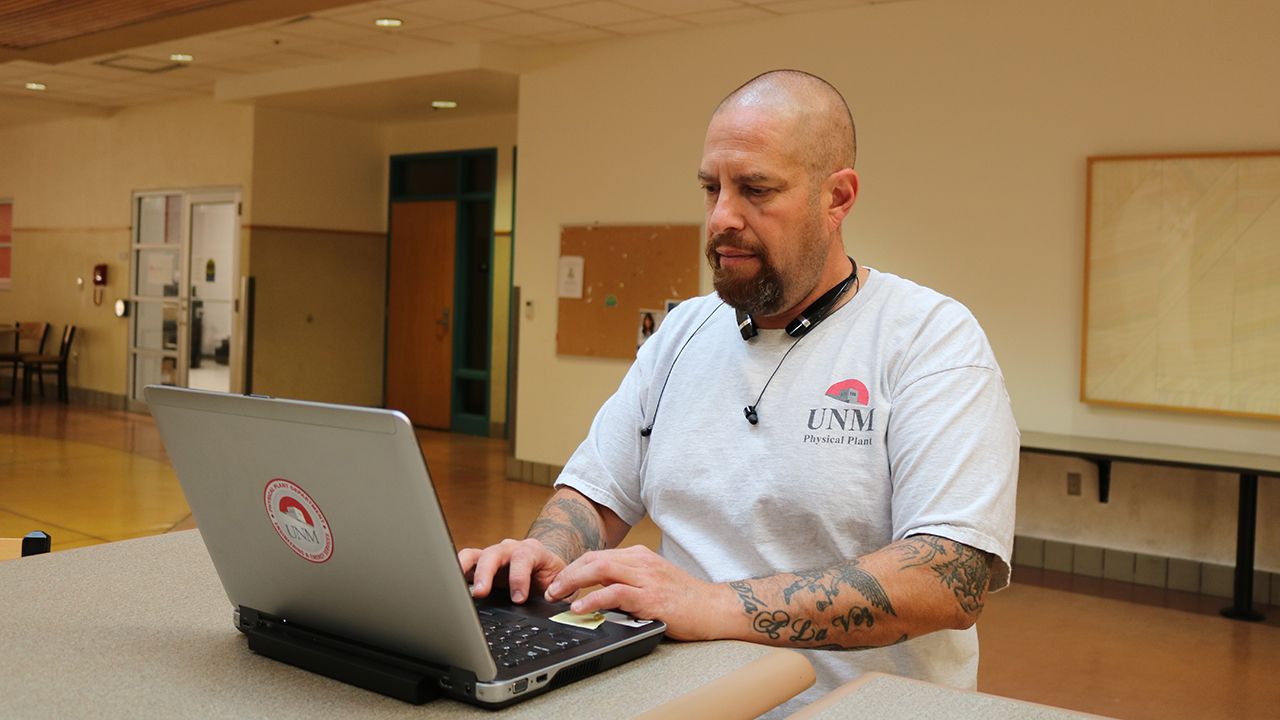 When Physical Plant Department (PPD) professionals with varying areas of expertise come together, amazing things can happen. PPD Engineering & Energy Services (E&ES) and the Area 1 maintenance group collaborated on an in-house project to upgrade the controls for the heating, cooling, air conditioning and ventilation (HVAC) system at Dane Smith Hall, a 20-year-old building. For the first time, two PPD groups, carried out a large and complex project avoiding contractors, change orders and the complications that can occur while working with entities outside of the University.

This $130,000 project was designed by the engineers in E&ES and the installation was performed by electricians, HVAC technicians and plumbers employed by PPD. Overall, the final cost of the project was $6,000 lower than budgeted, even with the added scope of work due to cost savings.

“When we realized we were going to save so much money, we were able to include a lot more upgrades to the building systems than we initially anticipated,” said Tommy Tafoya, E&ES manager.

State-of-the-art Variable Frequency Drives, HVAC controls, 90 valves for zone controls and 12 energy valves were installed to improve the efficiency of the six air handlers located in Dane Smith Hall. Area 1 maintenance was also able to explore and document where every controller and valve was located while troubleshooting problem areas based on their knowledge of the building’s unique set of circumstances.

Richard Van Damme, master HVAC tech in Area 1, said it was a nice change to be involved in every aspect of the project because it allows for the maintenance group to have a better understanding of the new technology and how it’s working in the building.

“Now we know where every access point is so we can get to the problem quicker and ultimately provide a better service to our students and staff,” said Van Damme.

With the new technology, it is anticipated that the building will require less electricity, steam and chilled water from the Ford Utilities Center, the University’s power plant.

“The most expensive part of operating a building on a daily basis is moving air. In Dane Smith Hall, the air handlers were running at about 68 percent of full fan speed capacity before we upgraded the system, and now they are running at 47 percent. A huge reduction in energy costs,” explained Tafoya.

Automated Logic Controls, the computer program used by PPD E&ES allows technicians to see all spaces in the building to monitor the temperatures and the details of how the air-handlers are functioning. From a remote site, technicians can see if a classroom is too hot or too cold and can adjust the temperatures from afar.

Consistent climate-controlled classrooms, energy efficiency, and a complete working knowledge of the buildings systems for maintenance are the main benefits of this project. Another unexpected benefit was the workers were able to coordinate the work with the building occupants and build positive relationships.

“There were no complaints throughout the project from occupants because the PPD staff made sure to communicate effectively and work around the classroom schedules, offices and computer labs. Everyone was really impressed by the professionalism of PPD,” said Mark Orgeron, UNM graduate student and program coordinator in the UNM Provost office.

E&ES and Area 1 maintenance will begin their next collaborative project to upgrade the HVAC system at the Continuing Education building this summer.