For the past three weeks, two swim teams from Japan, one from Osaka, the other from Tsukuba, have been utilizing the University of New Mexico Seidler Natatorium to train in high altitude.

High altitude training occurs when athletes from sea level or low altitudes train in an area with a higher altitude, causing their lung capacity to increase due to the lower oxygen level and help them breathe in more air. The idea is that the more oxygen an athlete can take in, the better their performance will be. The body naturally uses oxygen to create more energy and is key to keeping muscles healthy.

“There is no training facility in Japan with this high altitude,” said Taketoshi Michiura, head coach of the Itoman Swimming School in Osaka. “We chose New Mexico because of the high altitude.”

One of the men from the Itoman Swimming School, Ryosuke Irie, participated in the previous Summer Olympics, winning two medals – one gold and one bronze. Irie and a few other team members are trying out for the Olympic Games in Brazil this summer.

The swimmers spent most of the three weeks at UNM training vigorously in the hope of improving their performance. Hiroko Takuwa, one of the assistant coaches with the Itoman team, said “Every day we have training here, 2 hours in the morning and then again in the afternoon.”

When the swimmers were not in the pool, they enjoyed shopping at Uptown and Old Town, commenting on the low prices in New Mexico compared to Japan.

“It was a very welcoming and heart-warming environment here. All of the people were really nice and we were very happy about that. [The swimmers] were able to really concentrate on their training,” Sengoku said. 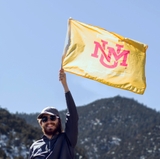