The Jonathan Abrams, M.D. Gallery hosts an opening reception featuring work by Holly Roberts and Robert Wilson on Friday, Feb. 28 from 5 to 7 p.m. The gallery is located on the fifth floor of the Ambulatory Care Center (5ACC) at the UNM Health Sciences Center.

Holly Roberts works intuitively, painting an abstract image before applying bits and pieces of photographic fragments and other materials on the surface of the painting, 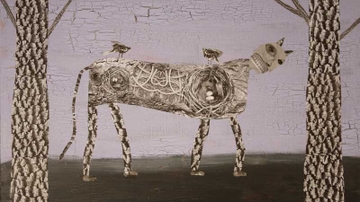 “What I am trying for is a painting that can stand alone but that won’t dominate the collage that is to follow. Most of what I use are photographs that I have taken and materials that I have either made or collected. The collage works best when the pieced photos make up something that they aren’t about literally, but have a metaphorical or poetic connection, either through subject or texture.”

Robert’s art focuses on the concerns in her life: the degradation of the environment, spiritual meaning in a world of polarized and extremist views, the stress and fear of aging, the daily fears and anxieties of being alive in the world today.

Robert Wilson’s primary art form is sculpture, using metal, wood and paint. This exhibition features his plein air watercolors that are about New Mexico, mostly as seen from major highways, the land-and-sky-scapes he has been fascinated by for 65 years. “Wherein making a physical form generally narrows my view on the object sitting in front of me, I notice that making landscape, especially with watercolor, does just the opposite. It is a kind of relief to consider the breadth and depth of a bigger world."

Roberts earned an M.F.A. from Arizona State University in 1981. Her work is nationally and internationally exhibited and has been published in four monographs. She has twice received National Endowment for the Arts Fellowships. In January of 2018 her work was exhibited in a one-person retrospective at the Griffin Museum of Photography in Winchester, Mass., called “33 Years.” A dedicated teacher as well as a prolific artist, she has had a profound effect on a community of artists around the country. She continues to live and work in the Southwest. 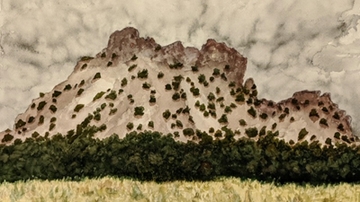 Wilson retired from a 40 year career in medicine in 2016. Throughout that time he was living alongside his wife, Holly Roberts. They shared a love of looking at, and a constant discourse about, visual art. During his medical career he took art and materials courses, made art, exhibited art, even installed public art. Wilson currently pursues a full-time career in drawing, painting, and making wood and metal sculpture.

The Jonathan Abrams, MD Art Gallery was founded in 1991, and officially designated by the UNM Board of Regents in 2008, to offer New Mexico artists a place to display their artwork, and to provide a venue at The University of New Mexico Health Sciences Center for patients, visitors, students, and staff to view contemporary art. The gallery is a collaborative partnership between The University of New Mexico Art Museum and the generous support of Fay Pfaelzer Abrams.

The gallery is typically open from 8 a.m. to 6 p.m. and is located on the fifth floor of the Ambulatory Care Center. Parking is available at the UNM Hospital West Parking Structure at Lomas & Yale.