The U.S. Department of Justice has released its findings following a review of The University of New Mexico’s policies and procedures in response to campus sexual assault. The DOJ acknowledged that during the 16-month investigation, the University made substantial improvements and significant progress toward addressing this complex issue. the DOJ also made findings that were critical of the University.

“UNM is not alone in trying to deal with one of the most difficult problems on today’s college campuses,” President Robert G. Frank said. “While we respect the efforts of the DOJ, we believe its report is an inaccurate and incomplete picture of our university. It is a brief snapshot in time that came on the heels of a high profile and widely publicized accusation of a sexual assault involving UNM students. Even so, we receive it in a spirit of cooperation and pledge to continue our campus wide improvements to combat this complex issue.”

The DOJ announced the compliance review in December 2014 in response to complaints of sexual assault and harassment by students, but gave no specific details about the allegations. At that time, UNM was already in the process of a major overhaul and expansion of resources to educate and help students needing information and support related to sexual violence. The campus-wide effort, dubbed LoboRESPECT, encompassed policy updates, expanded training, enhanced resources and renewed education and outreach.

Attorneys for the New Mexico U.S. Attorney’s Office and the Educational Opportunities Section of the DOJ’s Civil Rights Department conducted the review under Title IV of the Civil Rights Act of 1964 and Title IX of the Education Amendments of 1972, which both prohibit sex discrimination in education programs. Over the following year and a half, the University provided thousands of pages of records, answered countless questions and facilitated numerous interviews, as the DOJ requested.

“Universities like UNM face the unattainable goal of stopping campus sexual assault. We are asked to be investigators and adjudicators of incredibly complex situations that typically involve alcohol or drugs, and frequently occur off our campus,” Frank said. “The reality is that federal regulations hold us to a higher standard than any city, any police department, or any court system, even though our primary mission is to provide high quality education, health care, and research. And we are asked to do it all without any additional financial support.”

“We will never stop working with our community to examine and implement better ways to improve safety, protect students, and maximize the benefits of an education from New Mexico's flagship university.” – President Robert G. Frank

The DOJ’s nearly 40-page report concludes with specific next steps UNM must take to fully comply with Title IX, including:

UNM officials, including program directors, compliance officers, police and even student leaders, point to specific benchmarks the University has reached in the past few years that are underrepresented or not reflected in the DOJ report. 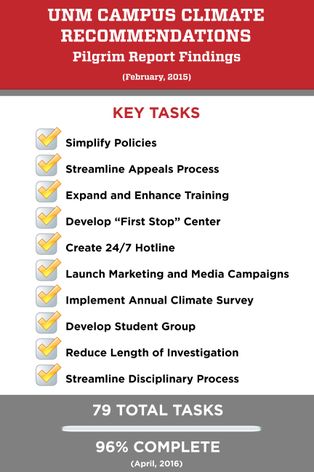 These improvements were all made following an independent outside review that UNM commissioned called the “Pilgrim Report,” and all measures were taken prior to the DOJ’s findings. UNM has pledged its continued cooperation with the DOJ in reaching an agreement to resolve the still pending issues it cites as next steps.

“We will never stop working with our community to examine and implement better ways to improve safety, protect students, and maximize the benefits of an education from New Mexico's flagship university,” Frank said. “We will carefully consider the DOJ's findings and move swiftly to implement as many of the suggested changes that are reasonably and realistically possible.”