UNM Newsroom / News / Knowing the value of a diploma 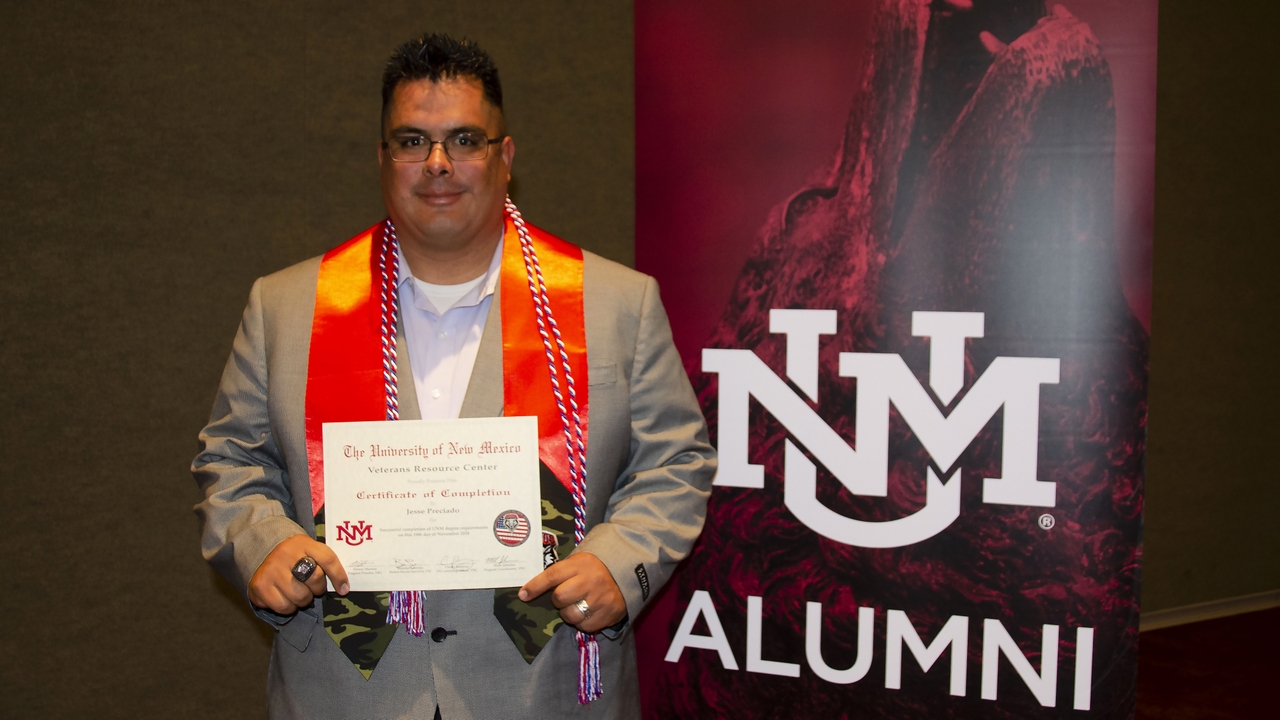 Knowing the value of a diploma

A Veteran’s journey from one desert to another
By Katie Williams December 14, 2018
Categories: Inside UNM Veterans Resource Center

"It's a lot to take in and live with, you can't take that amount of stress for so long." — Jesse Preciado

On the evening of July 4, Preciado was getting ready to attend a barbecue with his unit. Spirits were already low as many of the men worked through the previous night on fire watch and the convoy with beer headed to the gathering was ambushed and never made it.

“Iraq was a dry country, so their big promise to us was the beer,” he recalled. “We were a little bummed out, but we going to have fun doing recreational activities. We signed up for soccer and a volleyball tournament.”

But right before Preciado was able to join in the fun, he was called out on a recovery mission. Immediately changing out of his party clothes, he spent the entire night and well into the next morning working, finding trailers before it was too late.

“I had to go on this recovery mission because I was the only one in our motor pool who knew how to do the work—I was the only one licensed,” he said. “Trucks and trailers were left because they were ambushed. We had to get to them before they were set on fire. We drove past burnt trailers, not getting there in time and that was very stressful.”

The aftermath of battle is also something that has stayed with Preciado. Bodies in many indescribable conditions were frequently seen and interactions with the locals were always elevated due to the unknown intentions of their interaction with the troops.

“Kids ended up coming to our truck and they knew what the box MREs looked like, the food,” he recalled. “We didn’t have enough for everyone and didn’t want to cause a crowd, and due to the language barrier, one of the little boys kept persisting then started to wave something around, scaring the person in the truck with me enough to draw his weapon. I had to encourage him to remain calm. It's a lot to take in and live with, you can't take that amount of stress for so long.”

The University of New Mexico

Preciado served as a Marine for four years before deciding to return home to California to start school. He dreamed of a career in sports as he has a passion for coaching and bringing together the dynamic of a team. But he didn’t last long as a student in his home state.

“The big issue was finances. I started off at Pasadena City College,” said Preciado. “I got just enough prerequisites finished to transfer to UNM and in 2014, I moved to Albuquerque to continue school.”

Preciado, like many Veterans, chose UNM for its affordability. The University charges in-state tuition for those from out of state with military service.

With his wife and two-steps sons with him, Albuquerque became home as Preciado worked on finishing his degree.

“I was getting a dual degree — physical education and history — but I couldn't finish,” he said. “When I did student teaching, it just triggered me, my PTSD. It was too much noise and the crowd would cause me the anxiety. So, I figured, okay, I can't teach, so I switched over to history.”

The journey of finishing his degree at UNM was aided by many great support systems. The University’s Accessibility Resource Center helped with classroom and instructional accommodations, and the Veterans Resource Center (VRC) guided Preciado with paperwork and programs.

Just recently the VRC invited Preciado and 16 other Veterans and Veteran dependents to be celebrated during their Fall Graduation Recognition Ceremony. During this event, speakers including President Stokes and Naval ROTC Commanding Officer Capt. Michael Riley honored participants for their dedication to their education, and service to our country.

Now getting ready to accept his diploma with other Lobo grads this week, Preciado looks fondly back on his experience at UNM, specifically his time spent with the Student Veterans club.

“I think the benefits of being part of the Veteran's club was actually really interacting with other Veterans more on a social level,” he said. “Same with the VRC helping out with the paperwork and other things, it really helped me find my niche here on campus.”

With his sights set on graduate school here at UNM, there’s a new group Preciado hopes to connect with.

“I'm looking forward to joining the Veterans Alumni group here, and staying connected through that organization.”