Former University of New Mexico Regent Jamie Koch will be at the UNM Bookstore on main campus on Tuesday, May 8 at 10 a.m. to discuss and sign copies of his intriguing new book New Mexico Political History, 1967-2015: Conversations with Those Directly Involved. 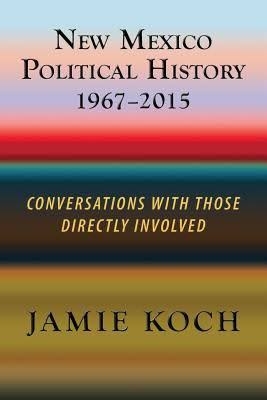 New Mexico Political History, 1967-2015: Conversations with Those Directly Involved provides a unique look at New Mexico political history from 1967 to 2015 through conversations with those – as the title states - directly involved. Topics of these conversations include the state's first subdivision regulation, the Open Meetings Act, the severance tax permanent fund, the Terrero Superfund cleanup, the founding of the New Mexico Mutual Casualty Company, Project SEARCH and Koch's 13 years as a UNM regent.

Koch, a native Santa Fean, has 48 years of public service to the state of New Mexico and UNM. He served three terms in the state legislature from 1968-1974, served as chair of the NM Game and Fish Commission for eight years and was the state chair of the Democratic Party in 2002. He has been a key advisor to current and former governors for decades and is the original author of the 1974 Inspection of Records Act.

The UNM Bookstore is located at 2301 Central Ave., NE at the intersection of Cornell and Central.