Sanjay Krishna, director of the University of New Mexico’s Center for High Technology Materials (CHTM), was one of 77 members of the Optical Society of America (OSA) elected to the latest class of OSA Fellows who have served with distinction in the advancement of optics and photonics. Krishna’s citation is for contributions to the development of infrared detectors and focal plane arrays.

Fellows of The Optical Society are elected based on their significant contributions to the advancement of optics and photonics and are selected based on several factors, including specific scientific, engineering, and technological contributions, a record of significant publications or patents related to optics, technical or industry leadership in the field as well as service to OSA and the global optics community.

“The 2016 Fellows are excellent examples of leaders and innovators in the field of optics and photonics,” said Philip Russell, president, The Optical Society. “Being named a Fellow of the Optical Society was one of the most unforgettable moments of my career and The Optical Society is honored to recognize the outstanding service and contributions of the 2016 class of Fellows.”

“I am really honored to be selected as a Fellow of the Optical Society of America,” said Krishna, who is also a professor in Electrical and Computer Engineering. “This is very timely as there is a large initiative related to photonics and optics at the university, city, state, national and international level. This was evident at the event hosted by UNM last month to celebrate the International Year of Light. Being selected as an OSA fellow in 2015 that the United Nations has declared as International Year of Light is definitely special.” 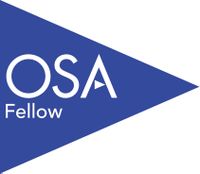 “We are one of the few university laboratories in the country that have an end to end integration from design, crystal growth of material, device fabrication and focal plane array development into infrared cameras,” Krishna said. “This rounds off the learning experience for the student to enable them to get a breadth of ‘material to manufacturing’ experience.”

Krishna, who has also been recognized as a fellow of SPIE (Society of Photonics), was named a Regents' Lecturer (2009) and Teacher of the Year (2010) in recognition of his extraordinary accomplishments, and leadership in teaching, research and service. He holds the Endowed Chair in Microelectronics. Krishna has received early career achievement awards from SPIE,from the IEEE Nanotechnology Council in 2008 and the International Symposium on Compound Semiconductors (2013).

Krishna recently co-founded Skinfrared, a start-up company that is leveraging advances in infrared imaging for applications in military to medicine. He has been recognized as Defense Intelligence Agency's 2007 Chief Scientist Award, and the North American Molecular Beam Epitaxy's 2007 Young Investigator Award. He has authored/co-authored more than 300 peer-reviewed journal articles with over 3800 citations.

The OSA Fellow Members Committee reviews nominations submitted by current OSA Fellows and then recommends candidates to the OSA Board of Directors. No more than 10 percent of the total OSA membership may be chosen as Fellows, making the process both highly selective and competitive. As a reflection of the Optical Society’s global reach, 60 percent of this year’s Fellows reside outside the United States.

The new Fellows will be honored at OSA conferences and meetings throughout 2016. In addition to their recognition, Fellows may apply for travel grants to visit and lecture in developing countries and may nominate OSA members for Fellow consideration.