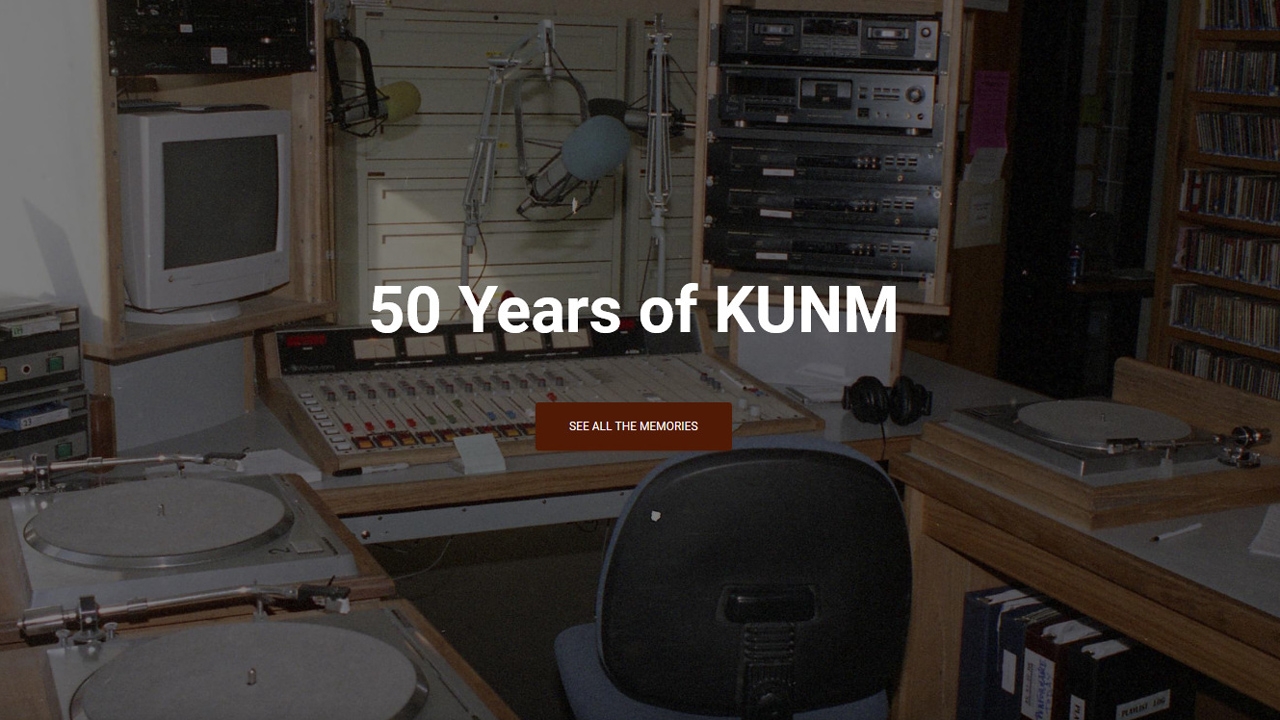 In celebration of KUNM's 50th anniversary in 2016, station volunteers resolved to honor many of their fellow programmers who freely contributed their time and talent over the years but have sadly passed on from this life.

For decades, listeners to the UNM-licensed FM radio station heard their familiar voices on the Singing Wire, the Home of Happy Feet, Freeform, Raices, the Blues Show and other popular programs.

The volunteers were masters of the blues, country, jazz, gospel, rock and other musical genres; they hosted local, regional and international musicians on the air; reported the news of the day; interviewed people from all walks of life on countless topics; and transmitted vital community information to audiences in New Mexico and beyond. In the broadest sense of the word, they were all educators.

"KUNM's home, located in a city where north-south Interstate 25 and east-west Interstate 40 meet and bordered by Native Pueblos and other traditional New Mexican communities, set the stage for the convergence of folks whose multiple musical and public affairs interests nevertheless found a common broadcast outlet," said Kent Paterson, longtime KUNM volunteer and contributor who is coordinating the memorial project.

"Whether native New Mexicans or newcomers from across the U.S. globe, volunteer broadcasters unleashed creative energies that firmly established KUNM as a significant community resource and institution. They were not only skilled in the craft of fine radio but also quite diverse and exceptionally creative in their off-air lives as well. We find men and women who were artists, musicians, biologists, veterans, blue collar workers, bus drivers, poets, actors, teachers, and community leaders."

Now, in memory of the late but not forgotten volunteers, KUNM has created a special page on its website dedicated to their life stories. Visitors will find individual biographies, audio clips from old shows, photographs, and poems written by or about the volunteers.  Interested readers will be able to add their comments about the radio personalities.

"For seasoned members of the KUNM community, the memorials will perhaps stir fond memories, maybe even tears and laughter. For newer listeners, the stories are an important element in understanding the rich history of KUNM,"  Paterson added.

"The honored volunteers were both products and producers of their times, and a lot can be learned about the modern history of Albuquerque, New Mexico and indeed the world through their particular stories. KUNM's dedicated volunteer programmers helped weave the soundtrack of the times and their voices were an invaluable contribution to the cultural pulses and identities of modern New Mexico. "

The memorials dedicated to late KUNM volunteers can be accessed at https://kunmmemories.org.