Thea Evans, UNM Food director of marketing had a clear vision when it came to selecting a theme and ambiance for the event that celebrated the unique stories of the UNM culinary staff. 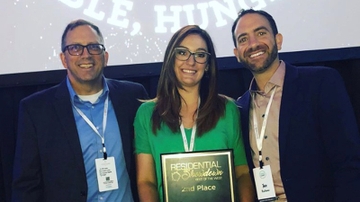 “The idea of LaPo Goes Global actually stemmed from the diversity of our culinary team,” said Evans. “Our executive chef is from Morocco and our sous chef is from Chile. That inspired us to take the event to the next level and feature cuisines from all around the world.”

The timing of the event was also a welcome highlight at the end of the semester. LaPo Goes Global was held in May in the La Posada Plaza and open to everyone. “With the semester coming to an end, we really wanted to put on a monotony breaker for the students,” said Evans. “Something that they could enjoy the nice weather we had been having, meet new friends, take their minds off the looming stress of finals, and try new cuisines from around the world.”

“LaPo Goes Global was an event that truly celebrated diversity and authenticity,” explains Sean Armstrong, Chartwells West Division regional marketing director. “The judging panel was very impressed with the menu engineering behind UNM Food’s execution. What really stood out to them was that our UNM Food associates were invited to present native dishes from their respective countries during the event. That type of engagement and commemoration was wonderful.”

Students were also pleased with the special event rating the event a 4.6 out of 5 specifically identifying their appreciation for the diversity and food quality.