Leadership doesn’t come natural to all; some people are born with it. Understanding how others operate and effectively work together, along with foresight in the changing business world are skills that need to be honed over a lifetime.

Shane Evangelist grew up in upstate New York, and enrolled at the University of New Mexico in 1993 on a gymnastics scholarship. During his time at UNM, Evangelist participated on the men’s gymnastics team for four years and was captain of the team. For a period, during his junior year, UNM was the top-ranked team in the nation.

“The team I was on, was a group of guys who understood the rigors of education and athletics, and who were trying to become the best they could whether they were going to compete on the Olympic stage or Johnson Gym,” said Evangelist. “That sort of motivation was intoxicating and great to be around.”

In his fifth year, Evangelist played on the golf team and was elected ASUNM Student Body President. In his role as president he effectively led a campaign to reform the policy that guides the Student Fee Review Board. The policy that was enacted during his time, despite small changes, is still in place and helps to provide a funding platform for many aspects of student life.

“The leadership skills, drive and determination that Shane developed as a student-athlete allowed him to quickly learn the ropes as ASUNM president,” said Student Activities Director Debbie Morris. “His ability to cultivate a long-term vision and put a step-by-step plan in place was definitely his strongest asset." 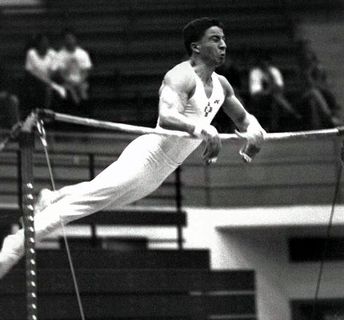 Shane Evangelist competes on the high bar as a member of the UNM men's gymnastics team.

Being president of ASUNM provided an interesting lesson in influence for Evangelist. “The education I received just sitting on the Board of Regents and seeing all that play out was very helpful,” he said. “And it’s treated me very well after leaving UNM.”

After receiving his BBA in International Management from the Anderson School of Management, he then went on to earn his MBA from Southern Methodist University. While attending SMU, Evangelist worked for IBM, where he was assigned to the company’s Blockbuster account. Once he graduated, he was promoted to business unit executive overseeing telecom and communication at IBM. Shortly thereafter, in 2001, he accepted an offer to join Blockbuster.

At Blockbuster, Evangelist began as the vice president of strategic planning, responsible for strategy development, mergers and acquisitions, marketing and capital deployment. Between 2001 and 2002, it became apparent that Netflix, a mail-order online movie rental service at the time, was going to start making some waves. Evangelist was successful in getting the Blockbuster management team and board of directors to approve the launch of Blockbuster Online, of which he became senior vice president and general manager.

After creating and launching Blockbuster’s online movie rental service, and battling it out with Netflix, Evangelist was given the opportunity to become president and chief executive officer of U.S. Auto Parts Network, Inc., the largest online provider of aftermarket auto parts and accessories. Recently, he was named one of the "Top 40 Marketing Executives Under 40" in 2007 by Advertising Age magazine.

“When Shane was a student at Anderson School of Management, he stood out in his focus and leadership skills. He was on a path to success and a fulfilling life before I met him as one of my students,” said ASM Professor Steven Yourstone, “He provides one of the very best examples of a Lobo who has achieved both success on his career path and success in life as a great family man.”

Evangelist has been back to UNM to share expertise on surviving and competing in difficult economic times with his fellow Anderson alums, and is a generous supporter of UNM men’s golf and Anderson School of Management. He has been asked to return again as commencement speaker for the Fall 2014 Undergraduate Commencement ceremony.