Living on the edge

Scientists at the University of New Mexico are conducting research at the edge of the Earth compiling volcanic data as part of the Deep Carbon Observatory (DCO) Deep Carbon Degassing (DECADE) research activity. The research is part of a 10-year initiative designed to better understand and to establish baseline measurements from natural carbon emissions compared to humans and the potential effect on climate change.

The Deep Carbon Observatory is comprised of four communities including: deep life, involving where it occurs; deep energy, which includes hydrocarbons; extreme physics and chemistry, found in deep interiors; and reservoirs and fluxes, where the exchange of carbon in deep earth is de-gassed through volcanoes.

Currently, the research is in the fifth year of a 10-year program with a $50 million funding pledge coming from the Alfred P. Sloan Foundation. The idea is to build a network of scientists studying carbon in volcanic regions. Each community receives about $500,000 - $600,000 per year.

“This is a nice opportunity for researchers to focus on carbon, which is the catalyst for life, climate change and also the energy that fuels our society. These are really, really important elements to understand.” – UNM Volcanologist Tobias Fischer

The goal of the research is to provide baseline measurements of carbon emissions to determine the extent of its impact, which ultimately has an affects climate change and life as we know it. Carbon is one of six main elements that are fundamental building blocks of life. The others include hydrogen, nitrogen, oxygen, phosphorous and sulfur. 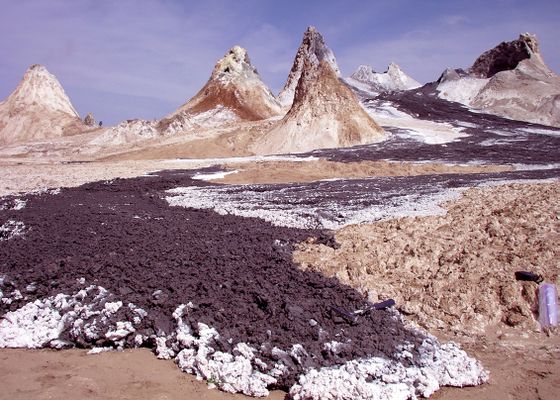 “This is a nice opportunity for researchers to focus on carbon, which is the catalyst for life, climate change and also the energy that fuels our society,” said UNM Volcanologist Tobias Fischer. “These are really, really important elements to understand.”

Reservoirs and fluxes
Fischer, his students and colleagues are involved in the reservoirs and fluxes community, and he is a member of the steering committee. He’s heading a multi-national global initiative involving about 80 scientists from a dozen countries in his group on quantifying the carbon emissions from volcanic regions. Fischer’s community is dedicated to identifying the principal deep carbon reservoirs, to determining the mechanisms and rates by which carbon moves among these reservoirs, and to assess the total carbon budget of earth. Other facets of this community include the study of tectonic de-gassing and deep earth reservoirs of carbon such as diamond and graphite.

They are questions such as: how much carbon is contained in earth; how much carbon is emitted from active volcanoes and active tectonic areas; how is carbon recycled between the atmosphere and earth’s crust, mantle, and core; what are the chemical forms of carbon in deep earth, and how are they distributed; what is the nature of the whole Earth carbon cycle and how has it changed over earth’s history? 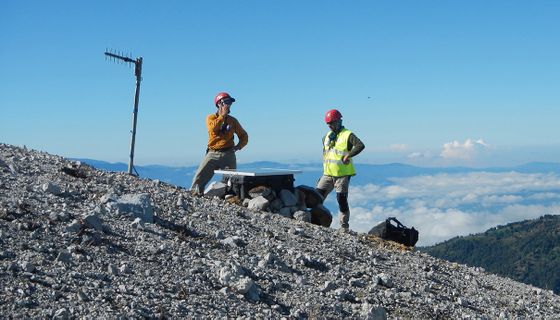 “It’s important to study deep carbon cycle which, contrary to the surface or short-term carbon cycle has received much less attention.  The deep or long-term carbon cycle is what controls the formation of fossil fuels, the exchange between mantle carbon and the atmosphere, and the role of volcanoes on climate change” Fischer said. “Volcanic carbon dioxide emissions are also important to monitor because the data can be used as a precursor to a volcanic eruption.  This is due to carbon dioxide’s low solubility in magmas” says Fischer.

The goals within Fischer’s community include:

A big part of the research, says Fischer, involves constraining emissions better. “By trying to constrain emissions, it will help us better understand climate variations based on volcano emissions,” he said. “This is important because we don’t know very precisely how much carbon is emitted from the Earth’s mantle and how much comes back into the mantle through tectonic plate subduction. We can determine the natural variations in carbon emissions and their effects on climate before human emissions started having an impact.”

Anthropogenic carbon emissions are mainly due to burning of fossil fuels. “Humans are the biggest emitters of carbon dioxide,” Fischer stated. “Humans account for about 100 times more (carbon emissions) than volcanoes. However, we need more data on the natural emissions to better understand how natural emissions affected the global climate in the past. In addition, for some vast areas of the globe, like the East African Rift which is 3000 km long, and tectonically very active, we do not have a clue about carbon emissions. Therefore there are potential sources of natural, mantle-derived carbon emissions that remain very poorly quantified but may have a large impact on the total global carbon budget.” 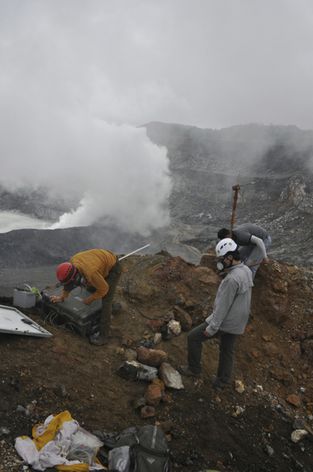 Researchers work on a monitoring station.

The remote Alaskan volcanoes remain poorly studied in terms of carbon emissions and are part of the project. Volcanic activity disrupts air flights over the Aleutians from time to time says Fischer. “At Kilauea Volcano in Hawaii, US Geological Survey scientists were able to forecast the last eruption due to carbon dioxide emission monitoring. There was a big peak in carbon dioxide prior to the injection of magma into the system which led to the current eruptive activity. Such studies show that with more gas monitoring, volcanic processes can be better understood which will lead to a reduction of hazards for populations living close to volcanoes.

As part of the initiative, researchers plan to add additional volcanoes and monitoring of carbon dioxide and methane emissions. Currently, there are 250-300 active volcanoes globally and only about a hand full are continuously being monitored for carbon dioxide emissions.

Fischer says the DCO wants to add four volcanoes in Costa Rica, Kamchatka and South America for continuous monitoring “because they are readily accessible with sufficient infrastructure nearby.”

The researchers want to measure how much carbon emissions are released out of rifts including the East African Rift and the Rio Grande Rift for which few data are currently available. The decade-long initiative started with the compilation of existing data as a starting point to determine gas composition levels previously established. Researchers want to first assemble all existing data on carbon emissions and build an accessible database.

“We’ll have a lot of data to input into the database,” Fischer said. “People will be able to go online and review the data. It will spawn a new dimension of volcano research we’ve been trying to attain.”

With natural carbon dioxide and connections to climate change, volcanoes have a big impact, but humans have an even bigger impact and scientists are tying it to exciting research on volcanoes.

“Given the fact that New Mexico is an energy state, that we have extensive volcanism and that we will be very much affected by climate change in the future, it may be of interest to decision makers in Santa Fe and elsewhere to emphasize some of the big research initiatives that are going on in this area and how UNM is participating,” Fischer said. “With Carnegie, UNM is one of the leaders of the deep carbon research in the reservoirs and fluxes directorate in the U.S.” 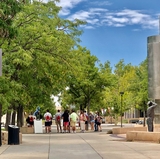