A sneak peek for student housing at the Lobo Rainforest Building will be held Wednesday, April 26 from 3:30 to 5 p.m.

Interested residents will be able to tour the model room of the new student-housing at the Lobo Rainforest Building located at the corner of Central and Broadway at 101 Broadway Blvd. NE.

Applications are now being taken for the new student-housing open to Innovation Academy students, current UNM Residents and UNM upper-classmen. Be one of the first to live, work and play at the new downtown site

The beautiful 2 bedroom/2 bath apartment-style units include a full kitchen, living space, washer and dryer, and scenic views of the city. 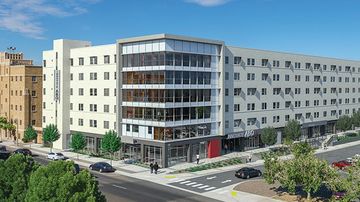 An artist's rendition of the northeast corner of the Lobo Rainforest building.

Also, on site that day will be Albuquerque Rolling Video Games—a mobile party on wheels. The game truck trailer has four windscreen highdef TVs that cover the walls in front of custom stadium seats with surround sound speakers. Games will be available on Xbox, PlayStation, Wii, and Playstation VR. Everything is linked, so 16 players can play the same game, against each other, or play different games on multiple consoles.

The Innovation Academy inspires the beginning of the problem-solving ‘idea pipeline,’ whereas Innovate ABQ implements the applied outcomes of the ‘idea pipeline.’