Lobos demonstrate physics to pass on interest in science

Getting middle and high school students excited and involved in science isn’t always the easiest thing to do. But, for The University of New Mexico Department of Physics & Astronomy, being able to break out some big ‘toys’ is something that usually gets the job done.

The department recently held its Lecture Demonstration Show on campus, an event that has taken place twice a year for the past two years. Students from across Albuquerque are invited to watch live physics demonstrations illustrating some fundamental principles of mechanics, optics, and electricity and magnetism. 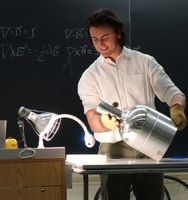 Physics major Nick Huntoon pours a small amount of liquid nitrogen out of a Dewar so as to cool a high-temperature superconductor through its transition temperature at -292 degrees Fahrenheit.

“As faculty members we feel an obligation to encourage the next generation,” said UNM Physics Professor David Dunlap, the event’s primary faculty organizer. “We hope to show younger students what physics is all about; perhaps they’ll decide it’s something they want to pursue further.”

Roughly 300 people, including a large number of elementary, middle and high school students, turned out for the latest demo show inside the Regener Hall Auditorium. Undergraduate and graduate students do nearly all of the demonstrations, using what they’re learning at UNM to teach others.

“It’s great for the undergrads to be able to put this on a couple times of year,” he said. “They have to get on their feet and talk about physics. It’s an important component of their education.”

Students use a very large Newton’s Cradle to demonstrate the conservation of momentum and energy. There’s also an oversized pendulum and a Rubens’ Tube designed to show the the standing wave patterns for sound in a musical instrument. Attendees got to see an optical fiber demonstration, and learned more about the recent gravitational waves discovery. 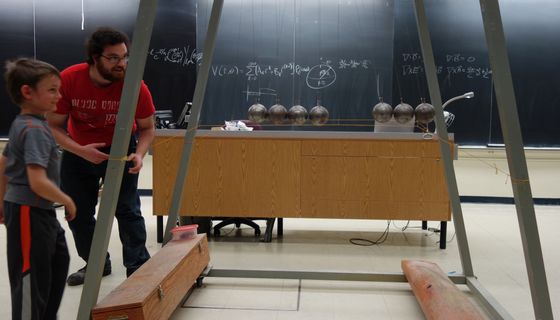 Dunlap said many of the larger demonstration pieces have been around since the 1960s, and credits past faculty for the opportunity to be able to have these kinds of events today.

“Without their vision for the future, we probably wouldn’t have access to these huge pieces of equipment.” Dunlap said.

Dunlap said UNM’s Physics & Astronomy department presented at School to World for years, but once the event went away, they wanted to find another way to connect with middle and high school students.

“Outreach is something that is very important to our department and UNM as a whole,” said Dunlap. “If we’re able to expose these kids to science at a young age through these demonstrations and our open house events and get them excited about it, then we’ve done our job. Plus, if they decide to continue their studies at UNM, it’s great for us too.”

Faculty organizers, David Dunlap and Leandra Boucheron want to recognize the student demonstrators for their efforts:

Organizers are already planning another Demonstration Show for the fall. Make sure to check the Physics & Astronomy webpage this summer for more details.