Climate scientists have long documented the strong control of Earth’s orbital variations on the waxing and waning of the great ice ages, when huge “pluvial” lakes filled the valley floors of the Great Basin. For years it was thought that Great Basin climate marched to the tune of a different drummer. This paradox arose from an iconic climate record from Devils Hole, Nev., which suggested that Great Basin climate warmed out of glacial periods before warming from changes in the earth’s orbit.

“Ice age temperature oscillations were the metronome and pacemaker of Great Basin climate change,” said Professor Yemane Asmerom, UNM Department of Earth and Planetary Sciences, who was one of the co-authors in the study along with UNLV Geoscientist Matthew Lachniet, a former postdoctoral fellow of Asmerom’s, and also former UNM student Rhawn Denniston, now a professor at Cornell College and UNM Research Scientist Victor Polyak. “The research resolves a long-standing climate paradox arising from Devils Hole, which suggested incorrectly that climate was out of step with orbital variations.”

Led by Lachniet, the researchers showed that climate change in the Great Basin (and Nevada) matches the timing of orbitally-derived periods of glacial cycles, in line with the theory forwarded by Serbian scientist Milutin Milankovitch over 100 years ago.

“Our record is the first long-term and continuous record that shows unambiguously that the Great Basin climate was paced by the earth’s orbit around the sun,” Lachniet said. “It also includes more samples over time than any other record.”

Lachniet and his team showed that the Nevada climate has followed earth’s orbital variations like clockwork over the past 175,000 years, getting warmer and colder between conditions like today and the ice ages. The intensity of summertime solar radiation controlled temperature variations. These data help resolve the long-standing paradox from Devils Hole.

The researchers’ data covers some of the same time intervals as Devils Hole, but show that climate was actually in sync with Milankovitch forcing.  The data match the phasing and amplitudes of summer insolation (650N), including the classic saw-tooth pattern of global ice volume and on-time terminations. Together with the observation of cold conditions during the marine isotope sub-stage glacial inception (5d), the data documents a strong precessional-scale Milankovitch forcing of southwestern paleoclimate.

“This stalagmite-based record has precise absolute chronology, unlike the ice-core record that has to rely on compaction model derived relative ages,” said Asmerom. “As a result, we established the timing of these clime transitions with unprecedented certainty. Our clean lab room here at the University of New Mexico enables us to do this kind of work.  We are one of the few places in the nation positioned to do this type of work.” 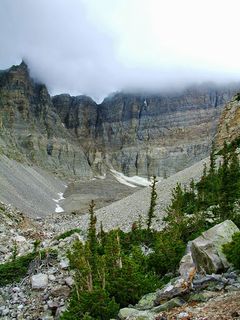 The rock glacier in Great Basin National Park attests to the former Ice Age climates of the Great Basin, and is now a tiny remnant of a former valley glacier. Photo credit: Matthew Lachniet.

The climate history was constructed from cave deposits that were collected between 2011-13 in Nevada – areas included Pinnacle Cave on Mt. Potosi in Clark County; Leviathan Cave, north of Pahranagat Wildlife Refuge; and Lehman Caves in Great Basin National Park. It is the first long, continuous speleothem-based iconic climate record coming straight from the source to Devil’s Hole.

“This work is part of a larger global effort at generate high-resolution records of climate change at various time scales,” Polyak said.

In addition, researchers showed that the growth of the iconic pluvial lakes in the Great Basin were controlled by this metronomic pulsing of climate changes linked to Earth’s orbit. The pluvial lakes were huge lakes that covered a large portion of northern Nevada during the last ice age when climate was much wetter than it is today. The Great Salt Lake in Utah is a tiny remnant of the past lakes in this area.

Based on this relationship of the variations in the earth’s orbit and Nevada’s climate, Lachniet and his team suggest that the region won’t see the re-appearance of these pluvial lakes for at least another 55,000 years. They also see evidence that the Great Basin climate has been warming for the past 1,600 years, which may indicate a human-control of regional climate because it departs from the orbital climate control, which should continue to cool for another 1,000 years.

“This is an opener of what we to be a more extensive effort centered in the climate of the Western United States, including the Southwest. The National Science Foundation just awarded us a three year grant to continue the work,” Asmerom said.