University of New Mexico Provost and Executive Vice President for Academic Affairs James Holloway recently announced the appointment of Dr. Mary Jo Daniel as acting/interim Vice President for Research (VPR), effective immediately. Daniel will serve as acting VPR during December and will then serve as Interim VPR starting January 1, 2021, until the next VPR is named and can assume the duties. 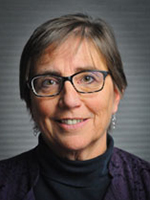 Daniel takes over for Gabriel P. López, who has served as Vice President for Research at UNM since 2015. López, whose appointment formally ends Dec. 31, 2020, will be away on personal leave in December.

“At UNM the Vice President for Research (VPR) is a lynchpin in the mechanisms of facilitation for this work,” said Holloway. “UNM has been fortunate to have Gabriel Lopez, professor of Chemical and Biological Engineering, serving in this role. Professor Lopez is returning now to his research on biomaterials and self-assembly that so strongly motivated his desire to serve others through the VPR role these past years. I thank him for his exemplary service, which included launching UNM’s highly successful Grand Challenges initiative.”

Daniel has been with UNM for a decade, having joined as the associate director of the New Mexico EPSCoR program. She currently serves as interim associate vice president for Research, as well as co-PI on the UNM ADVANCE grant. Daniel earned her Ph.D. in Multicultural Teacher and Childhood Education at UNM in 2005, and she has a long career of supporting STEM education and the development of STEM educators, from K-12 teaches to the support of women faculty in STEM.

A search for UNM’s next vice president for Research is currently underway. In November, three candidates for the position virtually visited UNM for two days of discussions, open fora, and interviews with the UNM community.